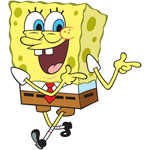 As if anyone could question the staying power of SpongeBob SquarePants, the square little dude’s show has been officially picked up for a ninth season by Nickelodeon, reports Deadline.com. The move will put the series over the 200 episode mark when season nine airs in 2012.

The move is a bit of a no-brainer for Nick, as SpongeBob has been the No. 1 animated series with kids ages 2-11 (and more than a few adults) for a full decade, and is seen in 171 territories worldwide.

“SpongeBob‘s success in reaching over 200 episodes is a testament to creator Stephen Hillenburg’s vision, comedic sensibility and his dynamic, lovable characters,” said Brown Johnson, president of animation for Nickelodeon and MTVN Kids and Family Group. Hillenburg remains an executive producer on the series alongside Paul Tibbet.

A new hour-long anthology special, Legends of Bikini Bottom, is the next new Spongebob content to air and will premiere on Jan. 28.