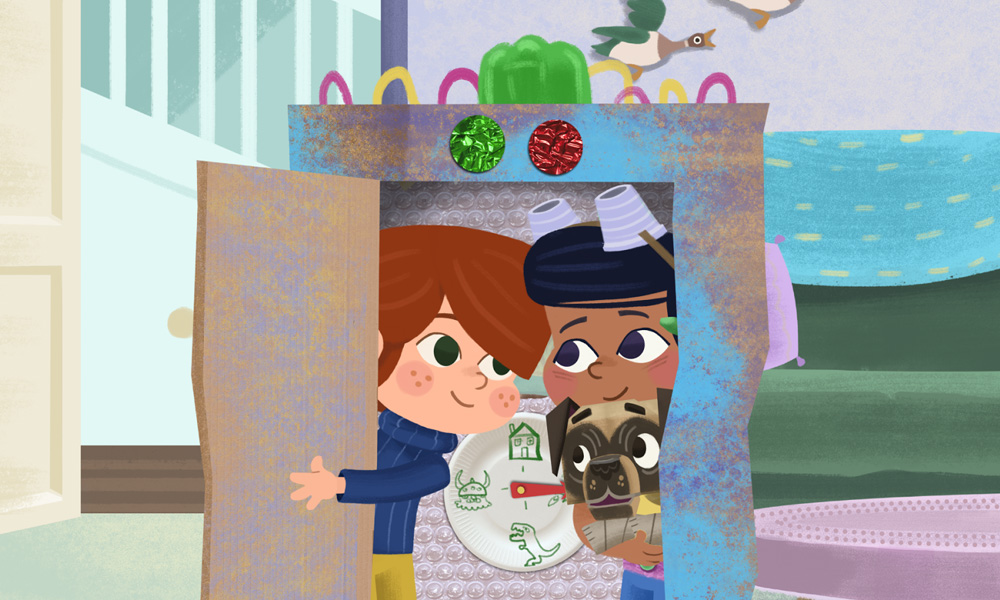 Kiva Can Do!, the popular inventing-themed kids’ animation from Dublin-based Kavaleer Productions, has entered production on a second 52 x 11’ season, which will follow S1 to Nick Jr. channels across multiple international territories in 2019. The announcement was made by Nickelodeon International and Brian Lacey of Lacey Entertainment, the series’ worldwide distributor for TV broadcast and home entertainment rights.

“Nick Jr.’s international commitment to this new production season underscores the entertainment appeal and the ability of Kiva Can Do! to deliver a strong viewing audience,” said Lacey.

Created by Kavaleer CEO Andrew Kavanagh and produced by studio MD Gary Timpson, Kiva Can Do! follows the adventures of seven-year-old Kiva Kain, the world’s greatest kid-inventor; Saul Dunne, her mechanically-minded best friend; and Angus, their intrepid cardboard puppy companion. Encouraged by Kiva’s fun loving grandma Nanni, they embark on highly imaginative adventures just about anywhere! They assail the slopes of the highest mountains, dive to the bottom of the sea and explore the furthest regions of outer space in their quest for fun and friendship.

The series features a colorful, multi-textured design that complements the playful storytelling.

“Kiva Can Do! is a charming series with positive pro-social and STEM themed stories that are characterized by warmth and cheerful fun that reflects the highly imaginative play patterns of children around the world. Kiva is an especially aspirational character helping to encourage constructive personal development,” Lacey added. “The new production season continues the outstanding storytelling and dialogue among the ensemble cast of characters, with new personalities nicely folded into the series story arch. Moreover, the very affectionate relationship with grandmother Nanni helps to infuse an important and genuinely authentic trans-generational appeal to the series.”

Kiva Can Do! launched at MIPCOM 2017 and funded in part by the Irish Film Board, the Broadcasting Authority of Ireland, the Section 481 Tax credit and RTÉ. The series was developed with the assistance of Creative Europe.