The Lalaloopsy characters magically came to life when their last stitch was sewn and each have a unique personality based on the fabrics that were used to make them and a special pet. They come together for daily adventures in a whimsical world of silly surprises called Lalaloopsy Land. Lalaloopsy is co-produced with MGA and Moonscoop Productions.

“Kids adore the Lalaloopsy line and will now be able to engage with these characters in a whole new way when we bring them to life on TV for the first time,” said Teri Weiss, exec VP of production and development, Nickelodeon Preschool. “The Lalaloopsy world is filled with magic and surprises that will delight preschoolers while teaching important lessons about teamwork and friendship.”

“We are delighted to partner up with Nickelodeon, the greatest kids’ TV brand in the U.S. to air this outstanding series based on an award-winning brand,” said Isaac Larian, CEO of L.A.-based MGA Entertainment, the company behind the controversial Bratz Dolls, Moxie Girlz and Little Tykes. “The series is certain to fuel the brand to new heights.” 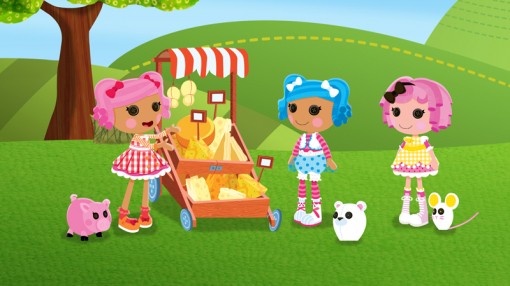