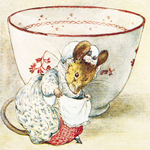 Nickelodeon, Chorion and Frederick Warne & Co. will develop and produce a new animated series based on the classic children’s books of Beatrix Potter.

The preschool series will feature such iconic Potter characters as Peter Rabbit and Benjamin Bunny and is set to air starting in 2012 on Nick and Nick Jr.

The deal is the third of its type between Nick and Chorion, who previously teamed up on the series Olivia and Max & Ruby. Frederick Warne & Co. is the publisher that owns the Potter characters.

“The World of Beatrix Potter is a celebrated brand with treasured characters that we’re introducing to a new generation of kids,” said Cyma Zarghami, president, Nickelodeon/MTVN Kids and Family Group. “Beatrix Potter’s timeless books have been cherished by millions of children, and Nickelodeon is thrilled to be involved in developing these classic characters into new television adventures the whole family can enjoy.”

Frederick Warne and Chorion have appointed Nickelodeon as the agent to represent the licensing and merchandising rights for The World of Beatrix Potter brand and the new animation rights in the United States, Canada, Central America, South America and the Caribbean. Nickelodeon will also represent the licensing and merchandise rights for the new animation series in India.

Chorion will have licensing and merchandise rights in the rest of the world for The World of Beatrix Potter plus the new animation.