Nickelodeon has announced the 12 winners of its second annual Animated Shorts Program, which is designed to identify and develop original comedy-driven content for kids. The cabler says this year, the program received close to 900 pitches from artists, designers, writers, directors and comedians globally. The winners will be developed as animated shorts with the potential to air on Nickelodeon, appear on www.nick.com, or on the recently launched Nick App. Nick also plans to expand the shorts program and launch an international version in the coming months.

“Nickelodeon received a striking response from all corners of the globe during the 2013 Animated Shorts Program submission period,” said Russell Hicks, Nickelodeon President of Content Development and Production.  “We’re thrilled to develop the new characters, relatable storylines and funny kid-inspired content from these 12 concepts into fully realized animated shorts.”

Concepts were received in all animation styles, from 2D, digital 2D, stop motion, CG and mixed media, from a broad pool of creative talent.  Creators of the 12 shorts will be provided with the necessary artistic and production support teams to help them complete their fully animated original, humor-based and character-driven shorts.

“In only our second year of the program, we have already tapped into a broad pool of talented artists, designers and directors,” said Jenna Boyd, Nick’s senior VP of  animation development. We look forward to developing this original and innovative content across all of our platforms, especially our Nick App which is really resonating with our audience.”

Among the finalists this year:

Last year, more than 600 pitches were collected during Nickelodeon’s inaugural Animated Shorts Program.  From the pitches, 12 shorts were created, six are currently in series development and two will get pilot orders. All 12 will air on the network, or appear on www.nick.com or on Nickelodeon’s new app. Pam and Sid’s Port-a-Party, is one of shorts that is available on the Nick App. 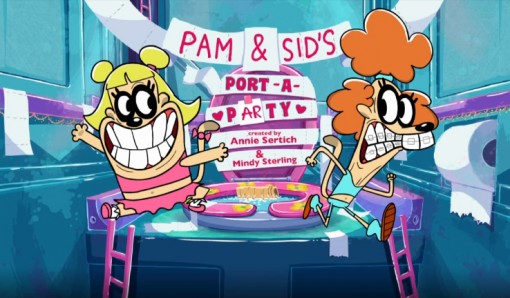