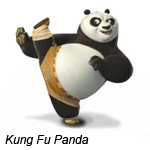 Nick is celebrating next week’s premiere of Kung Fu Panda: Legends of Awesomeness — a new animated series based on the popular movies — by pairing Po with new episodes of the network’s star series SpongeBob SquarePants.

The half-hour series Kung Fu Panda: Legends of Awesomeness will premiere Monday, Nov. 7, at 5:30 p.m. ET/PT, with additional new episodes airing each night through Friday at the same time.

Here’s a look at the first episode of Kung Fu Panda: Legends of Awesomeness, “Sticky Situation”:

Here’s how Nick runs down each episode:

5 p.m. – SpongeBob SquarePants: “Walking The Plankton” — Plankton sends Mr. Krabs and SpongeBob on a free cruise so he can steal the Krabby Patty formula while they’re gone-but when Krabs takes the formula with him, Plankton is forced to secretly go on the cruise as well so he can try to steal the formula.
5:30 p.m. – Kung Fu Panda: “Sticky Situation” — Po accidentally breaks the training equipment in the Jade Palace and invites a mechanical genius named Taotie to fix it. Unbeknownst to Po, Taotie is an old enemy of Shifu’s and this invitation was all he needed to seek his revenge.

5 p.m. – SpongeBob SquarePants: “Patrick’s Staycation” — Patrick decides it’s time to take a vacation, but he can’t afford to get away. SpongeBob comes up with the perfect solution: a staycation!
5:30 p.m. – Kung Fu Panda: “Chain Reaction” — Po is driving Tigress nuts with his fanboy ways while they are on a mission together. Things get worse when they are attacked by Croc Bandits and wind up handcuffed together. The two have to learn how to work together to evade the bandits and save their skins.

5 p.m. – SpongeBob SquarePants: “Mr. Krabs Takes A Vacation” — Mr. Krabs takes Pearl and SpongeBob on a vacation to the Ocean Mint, where they print all of Bikini Bottom’s money. But when Mr. Krabs learns that money is shredded and burned when it gets too old, he makes it his personal mission to save all those poor dollar bills from destruction.
5:30 p.m. – Kung Fu Panda: “Fluttering Finger Mindslip” — Po discovers a rare secret move which causes temporary memory loss, but things get out of hand when he uses it on the Furious Five.

5 p.m. – SpongeBob SquarePants: “Mooncation” — As Sandy prepares for a relaxing vacation alone on the moon, SpongeBob decides to surprise her with a “Have fun on the moon” cake. But just as SpongeBob gets in the rocket to give Sandy the cake, they blast off into space with SpongeBob as an accidental stowaway!
5:30 p.m. – Kung Fu Panda: “Good Croc Bad Croc” — The leader of the Croc Bandits helps Po out and Po agrees to return the favor. But he quickly learns that repaying a favor to a Croc Bandit might be more difficult than he imagined.

5 p.m. – SpongeBob SquarePants: “A SquarePants Family Vacation” — SpongeBob and Patrick are on an exciting road trip to the Great Barrier Reef with SpongeBob’s mom and dad when their boat suddenly breaks down. While the group waits at a service station for their boat to be fixed, SpongeBob and Patrick decide to pass the time at a nearby playground. But when Patrick’s overly rambunctious swinging on the swing set propels him into a ravine, the boys find themselves stumbling into a weird world.and have the adventure of a lifetime!
5:30 p.m. – Kung Fu Panda: “Hometown Hero” — Po visits Mantis’ hometown and discovers that Mantis hasn’t been entirely honest with the villagers about who the Dragon Warrior really is.