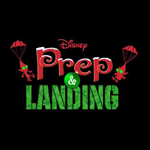 The seven-minute short film follows the adventures of stealthy operatives Wayne and Lanny, who go on a mission to retrieve a mysterious item from deep within Santa’s office — all without his knowledge.

The short will air after the network’s presentation of the classic holiday special A Charlie Brown Christmas at 8 p.m. ET/PT. Prep & Landing first appeared in a half-hour special that first aired last year .

The short was written and directed by Stevie Wermers-Skelton & Kevin Deters, produced by Dorothy McKim, and executive-produced by John Lasseter. The voice cast includes Betty White as Mrs. Claus, Sarah Chalke as Magee, Dave Foley as Wayne, Derek Richardson as Lanny and Morgan Sheppard as Santa.