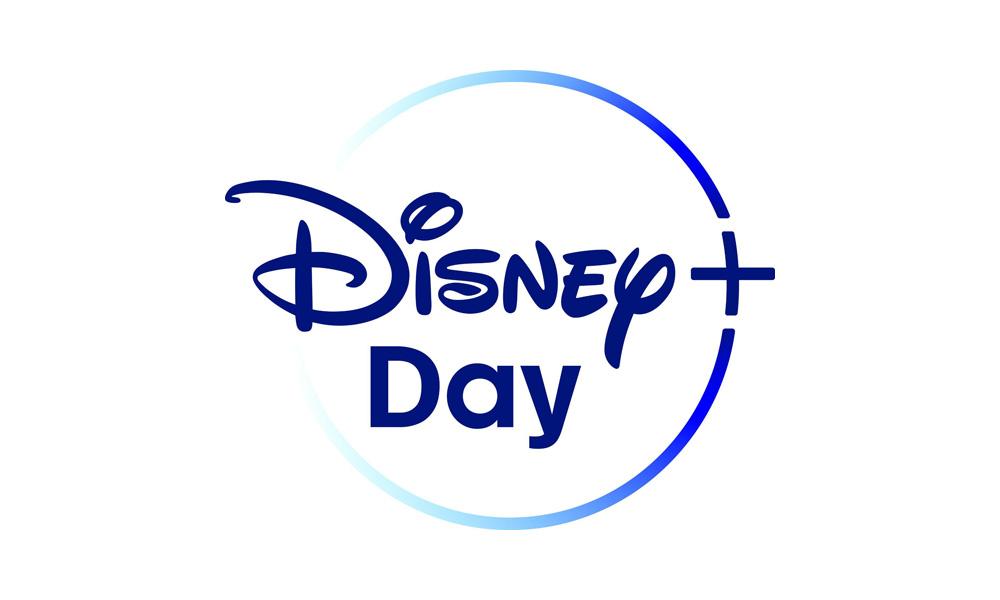 On Friday, November 12, The Walt Disney Company will host Disney+ Day, a global celebration that will come to life across all dimensions of the Company. Subscribers to Disney+ will be treated to new content releases across the service’s iconic brands, Disney, Pixar, Marvel, Star Wars, National Geographic and Star in international markets, along with a special presentation on Disney+ for fans with sneak peeks into what’s to come.

In honor of the second anniversary of Disney+, subscribers will have access to promotions and experiences across the Company. Disney Parks and Resorts around the world and Disney Cruise Line will roll out the blue carpet for Disney+ fans with some surprise and delight moments including photo opportunities, character moments and more; shopDisney.com will have special offers; popular network shows and syndicated series will join in the celebration along with talent and series across ABC, Disney Channel, ESPN and ESPN+, Freeform, FX, Hulu, National Geographic in the U.S. and on owned channels abroad.

Disney+ Day will feature content premieres from all of the marquee brands on service, including:

Live-action highlights include The streaming premiere of Marvel Studios’ Shang-Chi and The Legend of The Ten Rings; Disney family-friendly adventure film Jungle Cruise, available to all subscribers; new Disney+ Original movie Home Sweet Home Alone, a reimagining of the popular holiday franchise; the first five episodes from season 2 of The World According to Jeff Goldblum (National Geographic); a special celebrating the origins and legacy of Star Wars‘ legendary bounty hunter, Boba Fett; a special celebrating the Marvel Cinematic Universe on Disney+ with an exciting look towards the future; and Dopesick, an original series starring Michael Keaton, which will be released in international markets as part of the Star general entertainment content offering.

Subscribers to the service will be entertained with an inaugural Disney+ Day fan celebration on Disney+, which will include breaking news, first looks, new trailers, exclusive clips, and appearances from Disney+ creators and stars. 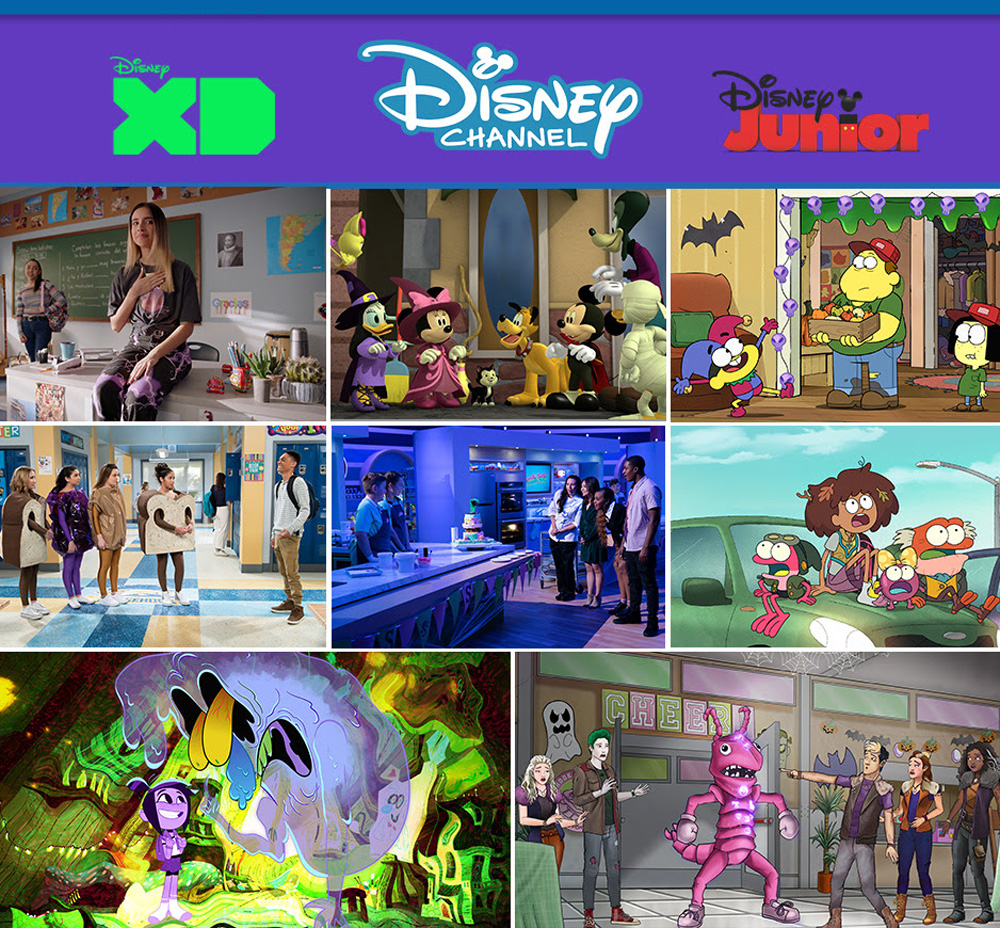 Meanwhile, on the linear side, Disney Channel and Disney Junior have announced even more tooned-up tricks and treats to unwrap this Halloween season, in addition to the previously announced October highlights.

10:04 p.m. Disney Channel | SERIES PREMIERE | ZOMBIES: Addison’s Monster Mystery “Happy Fall Ball” – Through a series of animated shorts based on the hit live-action show, Addison is hosting the Seabrook High’s Halloween Fall Ball and is going above and beyond to ensure the event is extra spooky and fun. After she gives the school’s “Shrimpy” mascot costume a makeover using some stones from the Wolf Den, a mysterious power brings the costume to life, like a pink, googly-eyed Frankenstein’s monster. As Monster Shrimpy begins terrorizing Seabrook and smashing everything in his path, Zed will need to work together with Addison to save the Fall Ball … and Seabrook itself.

Saturday, Oct. 2
9 p.m. Disney Channel / DisneyNOW | The Ghost and Molly McGee “Howlin’ Harriet / The (Un)natural” – Molly attends a Wilder Scouts camping trip to scope out her options for a best friend. / When Molly’s softball team struggles to believe in themselves, she decides to use Scratch’s ghost powers to manipulate the game and make them feel like winners.
9:25 p.m. Disney Channel | ZOMBIES: Addison’s Monster Mystery “It’s Alive”
9:30 p.m. Disney Channel | SEASON 3 PREMIERE | Amphibia “The New Normal” – Anne and the Plantars get transported to Earth and try to adjust to a wild new environment. Brian Sounalath (Ryan’s Mystery Playdate) and On Braly guest star as Mr. and Mrs. Boonchuy, respectively.

Friday, Oct. 8
9 a.m. Disney Channel / 12:30 p.m. Disney Junior | Marvel’s Spidey and His Amazing Friends “Gob-zilla / Speedy Spidey Delivery” – Team Spidey takes on a rampaging dinosaur only to discover Green Goblin at the controls. / Spidey is in charge of delivering the cake to Hulk’s birthday bash, but when some sinister Super Villains get in the way, Spidey realizes cake-duty might not be a one-hero job.
9:25 p.m. Disney Channel | ZOMBIES: Addison’s Monster Mystery “Monstrous News”

Saturday, Oct. 9
8:30 a.m. Disney Channel / DisneyNOW | HALLOWEEN SPECIAL | Big City Greens “Squashed”
9 p.m. Disney Channel / DisneyNOW | The Ghost and Molly McGee “Getting the Band(shell) Back Together / The Greatest Concert Ever” – When Molly learns about Brighton’s old outdoor concert Bandshell, she sets out to rebuild it to bring the community together. / Molly must find a band to play the first concert at Brighton’s new Bandshell.
9:30 a.m. Disney Channel | Amphibia “Hop ‘Til You Drop / Turning Point” – Anne brings the Plantars to the mall for a crash course in Earth survival. / Sasha and Grime escape from Andrias and hide out in Wartwood. Anna Akana (Youth and Consequences) returns as Sasha.

Saturday, Oct. 16
9 a.m. Disney Channel | The Ghost and Molly McGee “Mama’s Gotta Hustle / Hooray for Mollywood” – When the McGee’s van breaks down and the repair costs are more than they can afford, Molly’s mom decides to take on odd jobs to help the family make ends meet. / Molly learns that more money means more problems when she teams up with Andrea to create a scary movie.
9:30 a.m. Disney Channel | Amphibia “Thai Feud / Adventures in Catsitting” – Sprig tries to get rid of a food truck that’s threatening the family business. / The Plantars volunteer to take Domino to the vet.

Saturday, Oct. 23
9 a.m. Disney Channel | The Ghost and Molly McGee “Not So Honest Abe / Tje Best of Nin-tensions” – Molly only has a few hours to put together an entire school project on Abraham Lincoln, but it’s helpful that Scratch knows Abraham Lincoln’s ghost. / Molly senses tension between her mom and grandma Nin, so she takes it upon herself to identify the source of the conflict and mend the rift.
9:30 a.m. Disney Channel | Amphibia “Fight at the Museum / Temple Frogs” – Anne and the Plantars try to rob a museum. Anika Noni Rose (The Princess and the Frog) guest stars as Dr. Jan. / The Boonchuys take the Plantars to the Thai Temple. Brian Sounalath (Ryan’s Mystery Playdate) and On Braly return as Mr. and Mrs. Boonchuy.

Saturday, Oct. 30
9 a.m. Disney Channel | The Ghost and Molly McGee “Mazel Tov, Libby! / No Good Deed” – When Molly discovers her best friend didn’t even go close to big on the biggest day of life, Molly takes charge to throw Libby the best Bat Mitzvah ever. / When Darryl gets in trouble at school, Molly volunteers to help reform his delinquent ways by giving him “nice lessons.”
9:30 a.m. Disney Channel | Amphibia “Fixing Frobo / Anne-sterminator” – Polly tries to bring Frobo back to life. / A dangerous enemy finally locates Anne and the Plantars.