Radical Sheep Productions’ award-winning animated kids’ series Fangbone! will return to Disney XD in the US with new episode premieres starting Wednesday, February 22 at 3 p.m. ET. The show is produced by Radical Sheep (a division of Boat Rocker Studios), with animation provided by Pipeline Animation Studios.

Based on New York Times Best Selling author Michael Rex’s graphic novel series Fangbone: Third Grade Barbarian, Fangbone! follows a young barbarian warrior from Skullbania who travels to our world with the mission of protecting the toe of Venomous Drool from being reunited with its master. With the help of his new friend Bill, Fangbone embarks on a quest to outwit Drool’s minions.

The series as picked up several awards since debuting on air in March 2016, with recent honors including four nominations for the Canadian Screen Awards for Best Animated Series, Writing (two) and Best Interactive.

Fangbone! is executive produced by Michelle Melanson Cuperus of Radical Sheep, Michael Rex, Simon Racioppa, Richard Elliott and John Leitch. It was developed for television by Racioppa and Elliot, who also serve as series showrunners. Susie Grondin serves as Supervising Producer and the series is directed by Dave Barton Thomas and Joey So.

DHX Media is the series distributor for Fangbone!, and has sold it to Disney XD channels in the US, Latin America, Southeast Asia and Taiwan. The show airs in Canada on Family CHRGD. 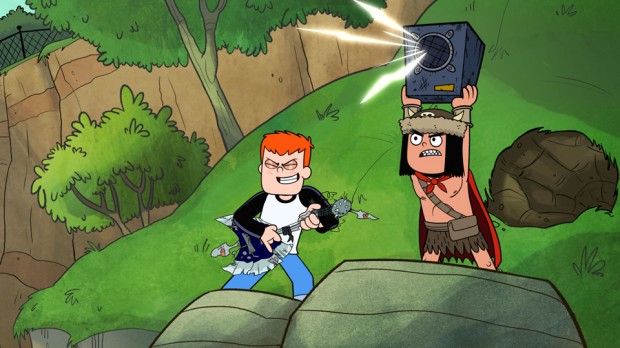