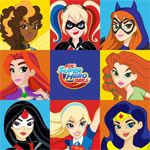 The series centers on Wonder Woman, Supergirl and Batgirl — a.k.a the not-so-typical teens Diana, Kara and Barbara. Together with their super hero friends, they work to protect Metropolis from some of the most sinister school-aged Super Villains in the DC Universe … while trying to survive school, friends, family and the chaos of trying to have a social life while keeping your powers and secret identity under wraps.

Pals Bumblebee, Zatanna and Green Lantern (Jessica Cruz) are always there to lend an ear, a shoulder to cry on, and a fist to punch with, and the Justice League amp up the fun whether they’re at a concert or taking down a crime ring. But what happens when Diana and her favorite study buddy and fencing partner, Tatsu, can’t agree on how to dole out justice as Wonder Woman and Katana? Or when Barbara finds out her Gotham-Con bestie is Harley Quinn?