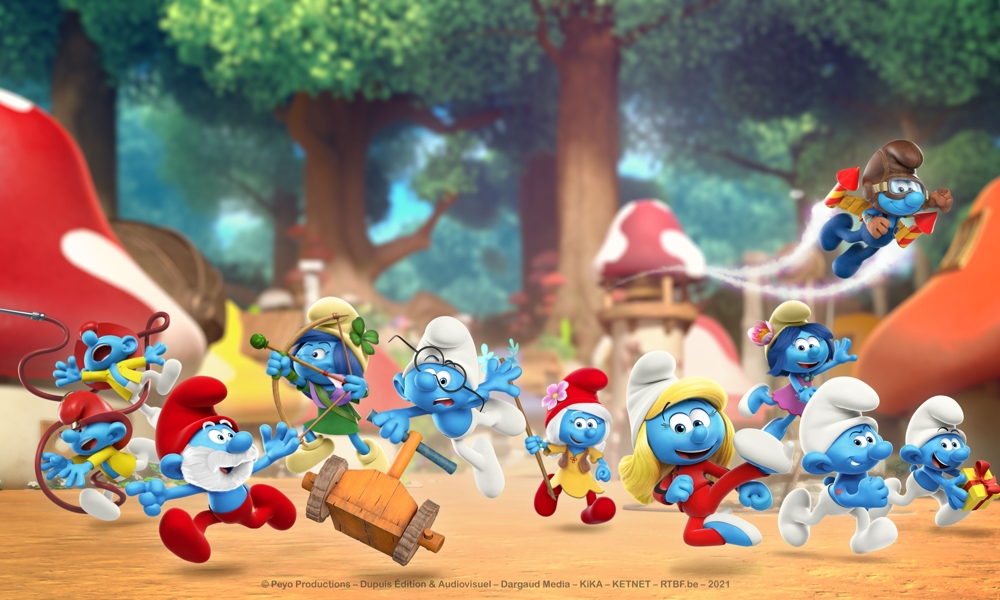 Presented in development at the 2018 Annecy International Animation Film Market (MIFA), The Smurfs, a new animated series produced by Dupuis Edition et Audiovisuel with Peyo Productions, for TF1 in France, heralds the revival of the famous little blue creatures on television. The series has been licensed globally by Nickelodeon, with a U.S. premiere slated for this year followed by international rollout.

Peyo’s beloved characters, created 1958, first made the transition from comics to the screen in 1959. The Smurfs began their animated adventures on TV, with Dupuis and then American studio Hanna-Barbera (Tom & Jerry, Scooby-Doo, The Flintstones, Wacky Races) and then the big screen, always with the same success. However, they have not been adapted for television since the late 1980s.

With Peyo Productions and Dupuis Edition et Audiovisuel, these small but scrappy stars will be back on the small screen starting May 9 in France on TFOU, in a brand new, totally updated 3D animated series: 52 original 11-minute stories directed by William Renaud (Calimero, A Kind of Magic…), featuring colorful characters (and not just because they’re nearly all blue) — including a whole team of daring and inventive girl Smurfs alongside Smurfette — and punchy dialogue. A joyful mixture for both girls and boys from six to 10 years old, which will also allow older children to enjoy rediscovering the essence of the comics.

“For Dupuis Édition et Audiovisuel, which was involved in the first animated adventures of the Smurfs back in the 1960s, it is extremely exciting to revisit this universe in this ambitious new series, alongside Peyo Productions and in collaboration with TF1,” said Caroline Duvochel, producer of the series. “This is a key project for our studio, in which all the teams have been particularly involved. We are very proud to be able to contribute to bringing today’s children these new 3D images showing the marvellous adventures of these characters, full of kindness, mischief and sparkle, things we need so much of in this day and age.”

“We are delighted to welcome the Smurfs to TFOU for new adventures, each one funnier than the last. This comedy/adventure series has its rightful place in our schedule as the world of these friendly little blue creatures and their very special language fits perfectly with TFOU’s mischievous yet caring tone,” said Yann Labasque, director of youth programming at TF1. “By giving the series consistent and powerful exposure on all its platforms, the TF1 group acts as a unique and strong sounding board for the franchise, whose licence is already managed by TF1 Licences.”

Véronique Culliford, founder and president of Peyo Productions and IMPS (distribution) and Peyo’s daughter, added that she was “very happy to be able to continue my father’s work once again by co-producing a new Smurfs TV series.” She added, “And this, almost 40 years after the world-famous original series. You will discover Smurfs in ‘3D’ effect, like in the last film Smurfs: The Lost Village [Sony Pictures Animation], with a lot of humor and lots of adventures full of twists and turns. This co-production has the best actors on the market and will enchant both young and old for decades to come!”

Distributed internationally by IMPS, the series made its world premiere on RTS in Switzerland and RTBF and VRT in Belgium in mid-April, and is now preparing to move into France and Germany before meeting the rest of the world.