Adult Swim has announced its programming plans for 2015-16, which includes 30 new original series, specials and pilots joining its slate of returning hits. “Adult Swim has always been known as a place for taking risks and for great talent trying interesting things,” said Christina Miller, president and general manager, Cartoon Network, Adult Swim, Boomerang. “Mike (Lazzo) and his team continue to raise the bar, always knowing what the Adult Swim fan wants; and this new slate of original programming adds to our growing line-up of successful primetime comedies.”

Animated highlights to look forward to include:

BAD GUYS (PILOT): Taste. Design. Marketing. Looking fresh to death. These are things that are lost on modern-day terrorists, but one man is going to change the game forever.  Bad Guys is a quarter-hour animated series about a bombastic, megalomaniac terrorist and his upstart terrorist organization; and their quest for global domination. World Governments and Fashionistas your days are numbered. Created by Paul Scheer (Fresh Off the Boat, The League) and Nick Giovannetti, produced by Bento Box.

MR. NEIGHBOR’S HOUSE (PILOT): Mr. Neighbor’s House is a children’s show hosted by Brian Huskey (Childrens Hospital, Veep). He’s like any other host of kids programming, except that he is barely able to contain the suppressed rage boiling underneath his quiet demeanor. From the safe confines of his home, he throws to various “educational” vignettes: puppets, animation, stop motion, spoken word and mixed medium elements that all blend together into one 15 minute show… that is NOT for kids.  Created by  Huskey, Jason Mantzoukas (Childrens Hospital, The League), and Jesse Falcon, who also serve as executive producers with Rob Corddry (Childrens Hospital, Hot Tub Time Machine).

BALLMASTRZ 9669 (PILOT): Thousands of years in the future no one cares about traditional sports anymore. The only game that matters is THE GAME, and the new breed of heroes that play it: BALLMASTRZ. Inside giant battle arenas the size of a small city, teams of Ballmastrz face off against each other using their own hyper-creative artificially intelligent combat weapons to attack, defend, and score. These are the BALLS. Obstacles and challenges test the physical, mental, and psychological limits of the players while entertaining the masses. The player or team that masters their Ball will master The Game in the most spectacular action sport ever played.  This quarter-hour animated series is created by Christy Karacas (Superjail!) and produced by Titmouse.

BUBBLEGOOSE AND JUICE (PILOT): Two best friends, a neurotic “Bubblegoose” and slacker “Juice” sharing a tiny no bedroom apartment as they try to maneuver through an unpredictable, supernatural, bizarro world, while still keeping up with the latest kicks. This quarter-hour animated pilot is created by Carl Jones (Black Dynamite).

CREATACEOUS CALIGULA (PILOT):  Los Angeles has been crushed by a title wave of radiated water. From the depths of the La Brea tar pits comes out a gang of dinosaur freaks led by a T-Rex Caligula. They want to take over mutant Gross Angeles and destroy anything in their way. This quarter-hour animated pilot is created by JJ Villard (King Star King) and produced by Titmouse.

DOBLE FRIED (PILOT): Doble Fried is a 6-pack of carnival freaks who run a low-rent amusement park smack drab on the border of Mexico and Not-Mexico. Whether it’s 4:20, beer-thirty, or crazy clown time, these dudes are constantly trying to scam money and score lady lizard honey. It’s a rickety roller coaster ride from the deep fried, clogged heartland of our failure. This quarter-hour animated pilot is created by Matt Furie and produced by PFFR.

FISTHEAD (PILOT): The relationship between two brothers is put to the test, as one, a loose-cannon action hero with a fist for a head, indiscriminately destroys not only villains, but his normal brother’s life as well. This quarter-hour animated series is created by Sean Glaze and Chris Prynoski, and produced by Titmouse.

OMG! EARTH (PILOT): OMG! Earth is a quarter-hour stop-motion animated comedy series featuring small plastic action figures going on larger-than-life adventures in the real world.  The show takes place against a backdrop of all the classic adventure environments, including the old west, the deep blue sea, and even the final frontier!  The pilot is created by John Harvatine IV and Eric Towner, Ashley Arechiga, and Bradley Schaffer, with Harvatine and Towner as executive producers with Seth Green and Matt Senreich (Robot Chicken), Arechiga, and Schaffer as co-executive producers. Produced by Stoopid Buddy Stoodios. 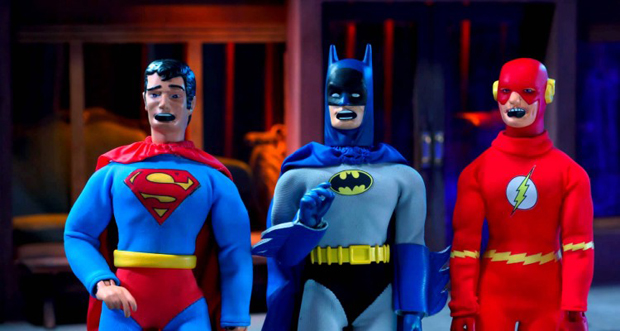