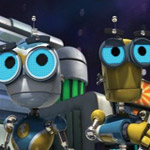 In advance of the MIPTV market in Cannes, ToonBox Entertainment and CJ Entertainment have secured international deals for the Redrover Co. Ltd. & ToonBox animated comedy series Bolts and Blip. The sales include a home entertainment deal with Nelvana and broadcast with Nickelodeon on Israel’s Ananey Network, set for July of this year.

The 26 x 22 3D high-def series previously sold to Canal + (France), ABC (Australia) and Teletoon (Canada) among others and will be one of the first stereoscopic 3D animated series to become available this summer, targeting the 7-11 audience.

The show, from director Peter Lepeniotis (Toy Story 2), follows two mischievous Civi-Bots named Bolts and Blip who desperately want to become Battle-Bots and compete in the Lunar League of Robotic Sports. When their wish comes true, they discover what they’re really made of as they battle enemy crews the Tread Heads, Blood-Bots, Galaxy All-Stars and the evil Dr. Blood.

For more info, check out www.boltsandblip.com.