February is off to a sweet start on Cartoon Network with a slew of new episodes for fan-favorite animated series The Amazing World of Gumball (starting Feb. 6), Steven Universe (Feb. 10), Mighty Magiswords and Valentine’s Day themed episodes of Clarence (Feb. 10) and Teen Titans Go! (Feb. 20). Scroll down for a full rundown and a clip from the half-hour TTG special, “BBRAE”!

Monday, Feb. 6 at 5 p.m. ET/PT: “The Potato” – When Darwin has lunch with Idaho, he decides to stop eating potatoes in solidarity with his brotato. However, he finds his obsession with his favorite food harder to kick than he ever imagined so Gumball decides to help his friend curb his carb cravings.

Tuesday, Feb. 7: “The Fuss” – Nicole tries, and fails, to hide her disappointment when Richard and the kids fail to remember her special day. Richard has to figure out what special day he has actually forgotten and then make it a day to remember or else!

Wednesday, Feb. 8: “The Sorcerer” – Gumball refuses to accept he is the only kid at school that doesn’t have special powers. He convinces Mrs. Jotunheim, Hector’s mom, to take him on as his apprentice but she soon learns leaving Gumball unsupervised around magic is a big mistake.

Thursday, Feb. 9: “The Outside” – The family goes to visit Richard’s dad, Frankie. Based on his basic living standards and extended absence from Richard’s life, they assume Frankie must have done a stretch in the slammer. When Frankie comes to stay with the Wattersons, they decide the way to make him comfortable is to make him uncomfortable and turn their house into a prison.

Monday, Feb. 13: “The Vase” – Sick of Granny Jojo’s ugly gifts, Nicole encourages the kids to take matters into their own hands and accidentally break her latest hideous vase. But when Gumball, Darwin and Anais try to destroy it, they discover it is more robust than it seems.

Tuesday, Feb. 14: “The Matchmaker” – Gumball catches Darwin gazing wistfully at a photo of Teri on Elmore Plus and secretly enlists Carrie to help bring them together. But when they can’t make Darwin and Teri’s love blossom naturally, they decide to make it happen supernaturally.

Wednesday, Feb. 15: “The Box” – The Watterson’s receive an unmarked package in the mail. To distract themselves from the urge to open it they all take turns to imagine what it might contain. To Mom it could mean financial freedom, to Gumball it could mean superpowers, to whoever it’s actually for, it means they’re not getting their package.

Thursday, Feb. 16: “The Console” – When Gumball is given a cursed videogame console, Elmore becomes trapped inside a fantasy RPG world. Gumball, Darwin and Anais have to battle their way through town, unraveling the secrets of their new virtual reality. But they’ll have to level up if they’re going to stand any chance against the mysterious final boss.

Monday, Feb. 20: “The Ollie” – When Darwin asks Gumball to teach him how to skate, Gumball makes sure he covers every aspect of the skating lifestyle from wearing the right gear, using the right terms and choosing the right board. But when Darwin finally gets his wheels rolling, he realizes there might be one important aspect of skating Gumball hasn’t taught him.

Tuesday, Feb. 21: “The Catfish” – When Gumball and Darwin realize Grandpa Louie has no friends on Elmore Plus, they feel bad so they create one called Muriel. However when Granny Jojo finds out Louie has been spending time online with another “woman,” Muriel not existing isn’t going to stop her from being destroyed.

Wednesday, Feb. 22: “The Cycle” – Gumball, Darwin and Anais discover that Mr. Wilson has been picking on their Dad for most of his life; ever since he humiliated Richard with a high school prank. The kids try to work Dad through it but when their efforts fail, they realize that getting back at Mr. Wilson is the only way to break the cycle.

Thursday, Feb. 23: “The Stars” – When Dad gives Larry’s hairdresser a bad review for saying he’s bald, he gets offered a free haircut. This inspires Gumball and Darwin to go on a reviewing spree across town, forcing Larry to give them stuff with the threat of a bad review. Just because the customer is always right doesn’t mean that what they’re doing isn’t wrong.

Monday, Feb. 27: “The Grades” – Miss Simian discovers a failed test from Gumball’s past that brings down his grade point average. This means he has to retake kindergarten all over again, much to her delight. But by demoting him, Miss Simian has inadvertently brought herself down, and they’re left with no choice but to team up if they want things back to normal.

Tuesday, Feb. 28: “The Diet” – Gumball and Darwin discover the reason Dad’s diet wasn’t working was that he was actually on 10 of them and eating a meal for each of them. They eventually manage to help him lose weight, but Richard’s newfound buffness also brings out his more obnoxious side.

Friday, Feb. 3: “Share and Dislike” at 6:15 p.m. ET/PT – Super Shooting Star Magisword is the coolest Magisword ever, but Vambre and Prohyas can’t seem to share it, and even a quest to reclaim the never-melting ice cube back from Frosteratu can’t shake their obsession.

Friday, Feb. 17: “Grup Jam” at 6:15 p.m. – Grup invents the “new” sport of basketball, but the stakes are too high for the Warriors to let him play the Galacton team, as the winner shall rule the Kingdom of Rhyboflaven.

Friday, Feb. 24: “Witchy Simone Ruins Everything!” at 6:30 p.m. – Witchy Simone joins Witch Way, but Gateaux is the odd cat out so he hires the Warriors to break up Witchy Simone and Morbidia and defeat a mission that has King Rexxtopher hopping mad!

Friday, Feb. 3: “Inner Beauty of a Cactus” at 6 p.m. ET/PT – The Titans play Spin The Bottle as Starfire tries to improve her vocabulary through kissing.

Friday, Feb. 10: “Movie Night” – It’s Movie Night and the Titans have a hard time deciding who gets to choose which movie they watch.

Monday, Feb. 20: “Teen Titans Go: BBRAE” (half-hour special) – Beast Boy writes a song to tell Raven how he feels about her. Beast Boy goes on tour with his song, but this upsets Raven.

Friday, Feb. 24: “Rocknaldo” at 7 p.m. – Ronaldo sets out to find all the rock people living in Beach City!

Friday, Feb. 3: “Pizza Hero” at 6:30 p.m. ET/PT – It’s the end of the school year and as is tradition at Aberdale Elementary, Papa Marianio is slated to dish out his famous pizza along with a spectacle of song and dance. As the kids wait in excitement, they share memories about times with Papa.

Friday, Feb. 10: “Valentimes” (back-to-back premieres) – When Clarence notices his teacher Ms. Baker is the only one in class left without a Valentine this year, he decides to enlist the help of Sumo to set her up with Sumo’s teacher, Mr. Mozer! Will sparks fly or will the boy’s naïve view of romance backfire?

Friday, Feb. 10: “Sumo Goes West” (back-to-back premieres) – Clarence learns his best friend Sumo may transfer to another school! It’s up to Clarence to protest, petition and rally to convince everyone to let Sumo stay – or face losing his closest school pal!

Friday, Feb. 17: “Clarence for President” – It’s school election time at Aberdale Elementary, and Jeff is once again determined to become Class President. However, like previous years, he’s unsuccessful in connecting with other kids – that is until he sees a shoe-in puppet President – the lovable Clarence.

Friday, Feb. 24: “Rock Show” – Chad’s band Dogmon, plays a show for the first time in years, giving Clarence and Mary a chance to really rock out. 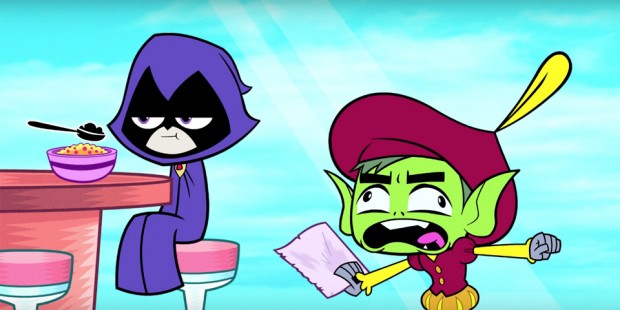