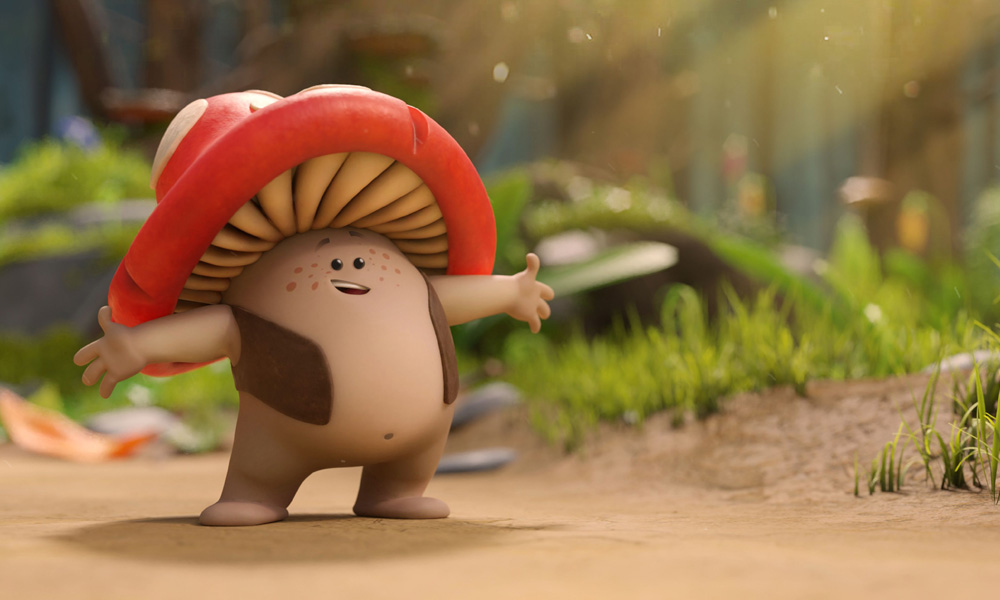 Anyone who has seen Disney’s 1940 classic Fantasia knows that animated mushrooms can be a lot of fun to watch. That’s why French studio La Cabane and Belgium’s Thuristar are hoping that young audiences will be drawn to their new CG-animated series, Mush-Mush and the Mushables. The  52 x 11-minute series, which targets 4- to 7-year-old viewers, follows the forest adventures of Mush-Mush, his best friends and the rest of the Mushable community, as they explore, grow and discover the joys of wildlife.

“Mush-Mush was created by Elfriede de Rooster (Belgium), a self-taught CG-sculpting artist (Zbrush) who grew a passion for 3D-printing,” says producer Perrine Gauthier, who founded La Cabane studio in 2015. “So the character of Mush-Mush was first born as a little figurine. About four years ago, in 2015, Elfriede contacted us to offer her CG modelling talents to our projects, but when we discovered that she had created this little world of Mushables, we proposed to develop a series and an IP together!”

Gauthier, a TeamTO alum whose other credits include series such as My Knight and Me, Angelo Rules and Plankton Invasion, then reached out to Thuristar founder Joeri Christiaen (Plankton Invasion, My Knight and Me) for art direction and to flesh out the graphic look for the characters and the detailed, semi-realistic backgrounds and lighting. “I think Mush-Mush is a rare blend of strong author’s vision and high commercial potential,” says Gauthier. “The graphic roots of the project give it an immediate and universal appeal. There’s really this feeling of wanting to be a part of that world … It’s different, but recognizable, like a ‘familiar fantasy’. The Mushables are a little bit like us, but they have their very peculiar way of life. They are relatable and unique!” 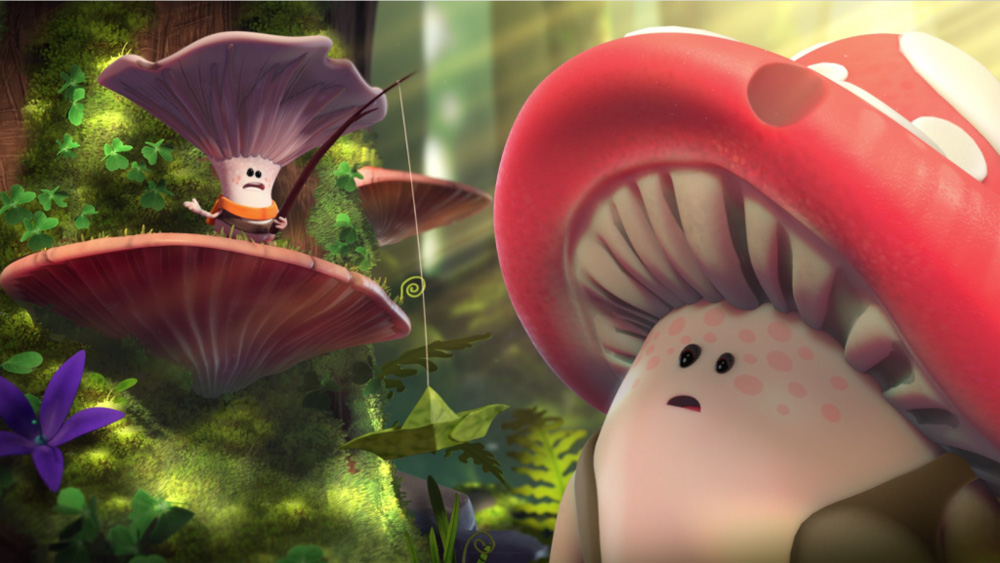 Gauthier believes that while there’s a warm and charming feel to this world, the writing and directing style is fast-paced and full of comedy and twists — and that’s why buyers have really responded to this combination. “Music is another essential element and part of our companies’ DNA,” the producer adds. “The composers (Frederik Segers and Jan Duthoy) have even built their own instruments (mostly made of bamboo) to create Mush-Mush’s very own musical identity, which also includes a few songs.”

Gauthier and Christiaen work with Cube Creative to produce the CG animation which is done in Blender, from CG pre-production to animation and rendering. Mush-Mush launches the new animation pipeline for Cube. The show also features 2D black-and-white segments produced in Toon Boom Harmony.

Overall, the producers believe that kids are going to be drawn to the appealing world of the Mushables. “Every Mushable has a special talent, and our heroes are discovering theirs while having fun and also making mistakes,” explains Gauthier. “The comedy element is key in these character-driven stories. The Mushables are a fun and imperfect community that you get attached to. The forest is also like a gigantic playground! Kids love building treehouses, tracking animal footprints or scouting for worms (and so did their parents when they were young!). Mush-Mush focuses on a macro-level that sparks the imagination of young ones even further and invites them to the fascinating world of moss, mushrooms and insects.”

The producer says it has been great to see Mush-Mush find a home with a wide variety of broadcasters at a time when there are so any reboots and adaptations in the market. “It was in Annecy that we started pitching the project three years ago,” recalls Gauthier. “Today we’re thrilled that the series is in production, scheduled to air in close to 150 countries starting next year — and that we’re now exploring more exciting opportunities for the IP, to hopefully turn Mush-Mush into a new, long-lasting brand… and ‘mush mush’ more!” 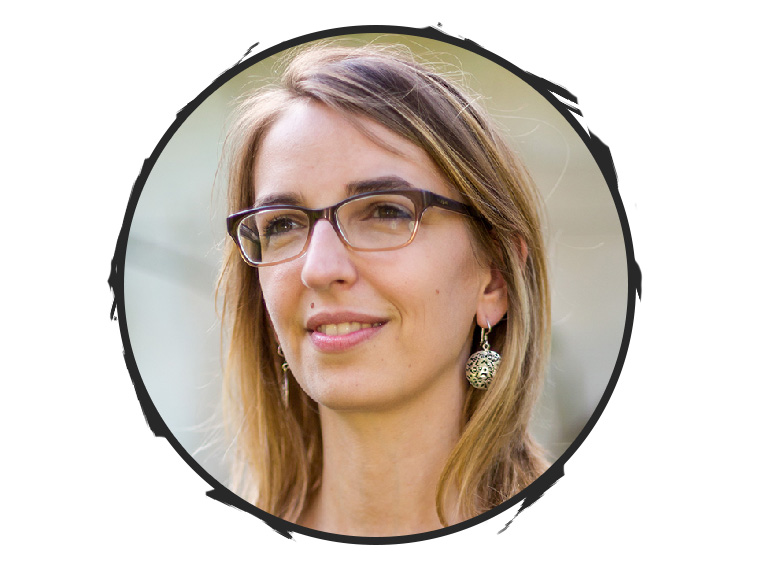 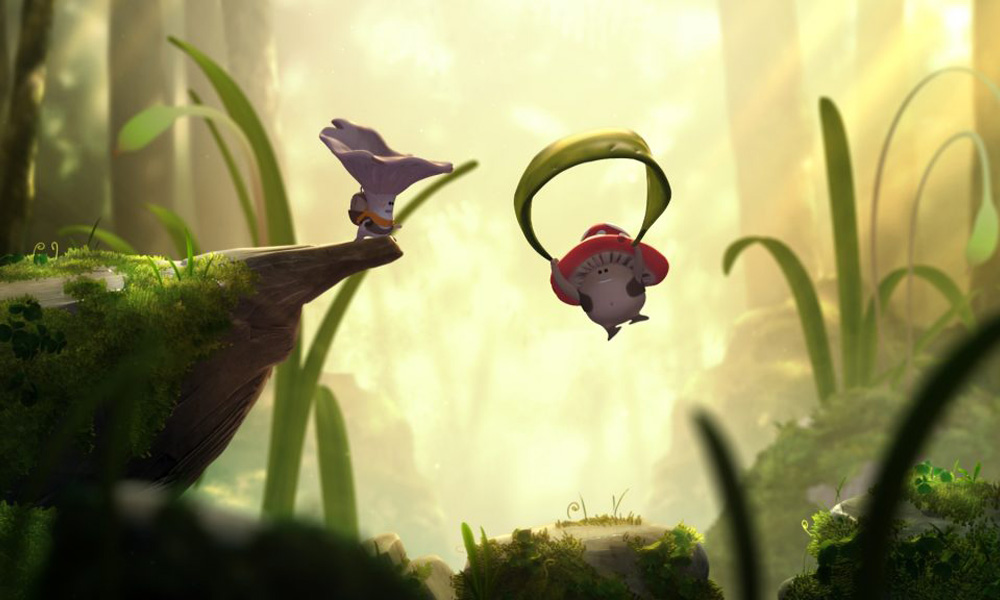