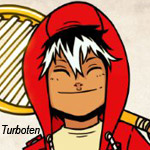 Moonscoop and I Can Fly announced plans to co-produce the animated series Turboten, in association with the  French Federation of Tennis and top-ranked tennis star Jo-Wilfried Tsonga.

The television series, aimed at kids ages 6 and up, is an adventure comedy featuring two students at secret tennis school called Turbo Centre, where they are developing the skills needed to take part in the global tournament Turboten.

Moonscoop and I Can Fly plan to grow Turboten into an innovative 360° propert and the French Federation of Tennis has a branded Turboten children’s space at Roland Garros for The French Open 2012 in the RG Lab 2050 Zone. In addition, Indeez is publishing a comic book to complement the series, and help grow awareness of the property in advance of the broadcast launch. The comic is a prequel to the television series.

“We a looking forward working with our partners on a project where sport, passion, challenges and team spirit will be bought together in an adventure for television and beyond,” said Christophe Di Sabatino, president of Moonscoop.

“We have significant partners supporting this project which will help to bring the brand to fruition, and create a unique transmedia experience for kids,” said Nicolas Fouillet, executive director of I Can Fly.