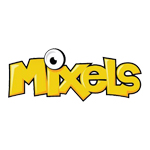 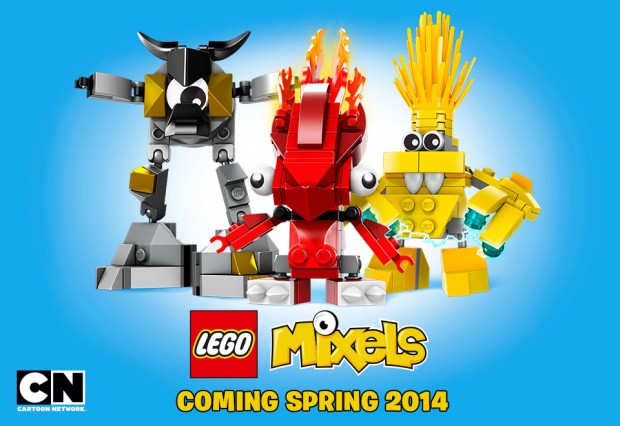 Last summer, right around Comic-Con, LEGO fans were thrilled to learn that Cartoon Network was planning a major new project with the Danish toy giant. In February, after months of anticipation, the property, which is called Mixels, makes its premiere on the toon cabler as well as launching its presence online and in toy stores.

So, what exactly is a Mixel? Well, this is what we know—they are cute, little (and of course, collectibles) monsters that can be mixed and matched in numerous combinations. The colorful first tribe, which arrives in February, is made up of three different kinds of Mixels—the Infernits which provide for the fire, the Cragsters which are builders and the Elecroids which fight darkness with electricity. Oh, and they will be battling some other set of crazy monsters called Nixels. There are three characters in each tribe, and they can all be combined with one another. Three tribes will be introduced in each release wave. But what really sets this franchise apart is how it really hits the ground running with well-laid plans for multimedia domination.

“We embarked on this plan to define new ways to develop content here which would take the strength of what we do at Cartoon Network—animation and animators and the ability to create new worlds and characters—and apply that to our partners who are in other businesses,” says Rob Sorcher, the cabler’s CCO. “We flew out to Denmark and saw various projects and zeroed in on these toys, these creatures that you can combine with each other and create new ones. What sets this apart is the way it really hits every touch point, from digital platforms, TV, toys.”

To help create the vision for the animated series, Sorcher tapped TV veterans John Fang and Dave Smith. “John had been more on the action side of the things, and Dave worked on the comedy shorts program at Cartoon Network. They didn’t know each other, and I secretly hoped that they would get along. Fortunately, they did, because we wanted Mixels to be a comedy but also have the play dynamic of an action property.”

Sorcher says not only did Fang and Smith get along personally and professionally, they also bonded over their love for LEGO. “Most animators tend to love LEGO, because it takes them back to their childhood, when they found the toys to be one of their first forms of creative expression,” he notes. “We told them we don’t want you to just design the show, we want you to create a complete world. It could become a TV show, a series of shorts, an app, a game. We wanted to put real animators at the core of this project, even if it didn’t end up being a series. We began to design this world and the key characters, and the LEGO team would also build their own building-block versions for the toys. There’s the digital animation team in Atlanta, as well as a team in Canada that produces the gaming version of Mixels.” (The animation for the 2D series is produced by Toronto-based Atomic Cartoons [Rocket Monkeys, Pirate Express] using Toon Boom’s popular Harmony software.)

Because there are so many different versions of the same characters, the creative teams had to work closely with each other to stay on the same page. “It was a complicated process, but it was made easy because there was very little friction between the teams, and everyone immediately understood the concept. It was a simple concept,” admits Sorcher. Surprisingly enough, it only took about 14 months from that first trip to Denmark to delivery date of the product and the series.

This month, CN will debut the first wave of Mixels as a collection of shorts, in various lengths, from 30 seconds to five minutes total. The shorts will then be formatted as a 22-minute special on the air and go into a series version. The characters are also being introduced online (at lego.com/mixels and mixels.com). There will be exclusive content online, on Cartoon Network and in the gaming version of the property. “If you like these characters, you can send them to a lot of places,” says Sorcher. “The toys will allow you to get special access to the website, where you can see more of the characters. We really wanted to proceed in a non-linear fashion here. We take our cue from the content—if it needs to be two minutes-long, then we have a short, if it needs to be a longer story, we have the series format. It’s all going to be anchored by the core of what we think we’re good at—animation and the creation of new characters and worlds that audiences will hopefully enjoy.”

“We know that kids want funny shows and fun games wherever they go,” says Chris Waldron, vice president, Cartoon Network Digital. “Mixels gives them both by letting them play the gorgeous Calling All Mixels mobile game and letting them watch the videos on mixels.com whenever and wherever they want. The result is a new brand that is fun, funny and feels entirely native to this digital generation.”

“What I love about the show is that we knew we had these great characters with fantastic combination possibilities, but we didn’t know what they would do, what they would sound like,” says Sorcher. “What really amuses me now is how these stories are playing visually. Both David and John are not really verbal guys, so they came up with this hilarious caveman-type language for them. They use basic words and telegraph their sentences. They grunt things like, ‘Taste good. Me go there!’ Of course, we also hired great voice actors like Tom Kenny, but the whole caveman-type language of the Mixels really makes me laugh.”

Mixels will premiere on Cartoon Network on February 12.

March 2014 Tech Reviews
In Pursuit of Art and Quality Content