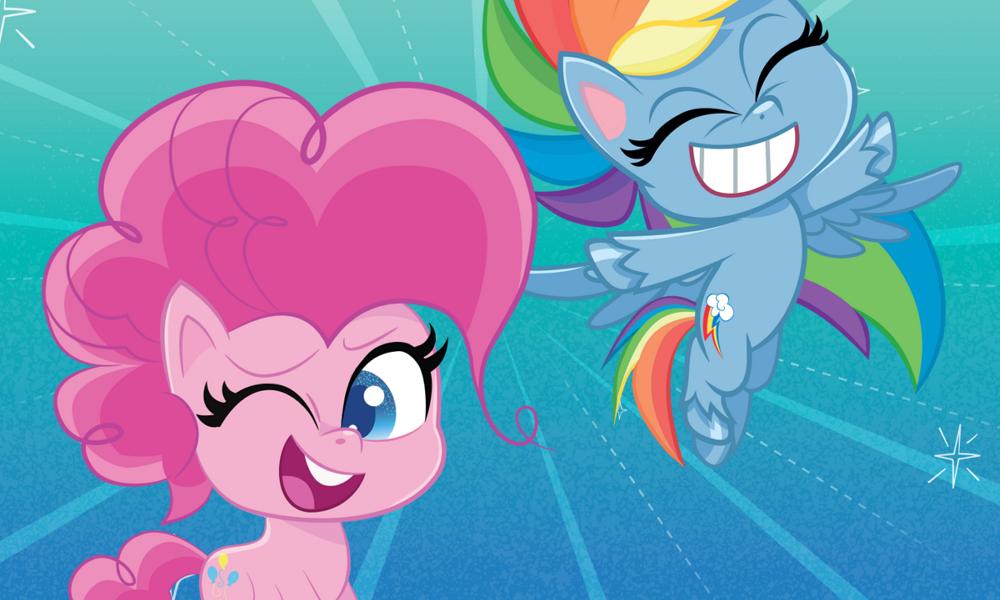 Hasbro’s global entertainment studio eOne has secured a strong line up of broadcast partners across most of the globe for My Little Pony: Pony Life, a brand-new 40 x 11′ series premiering in select territories this fall, with a larger roll-out running end of 2020 to spring 2021. The series explores the funny side of friendship, following the hilarious adventures of the ponies as they spend most of their time at Sugarcube Corner. The ‘Mane 6’ (Twilight Sparkle, Applejack, Rarity, Pinkie Pie, Rainbow Dash and Fluttershy) run into all sorts of cupcake conundrums, frosting fails and magical mishaps as Pinkie Pie serves up frosted cupcakes to the best customers in the world — her friends! 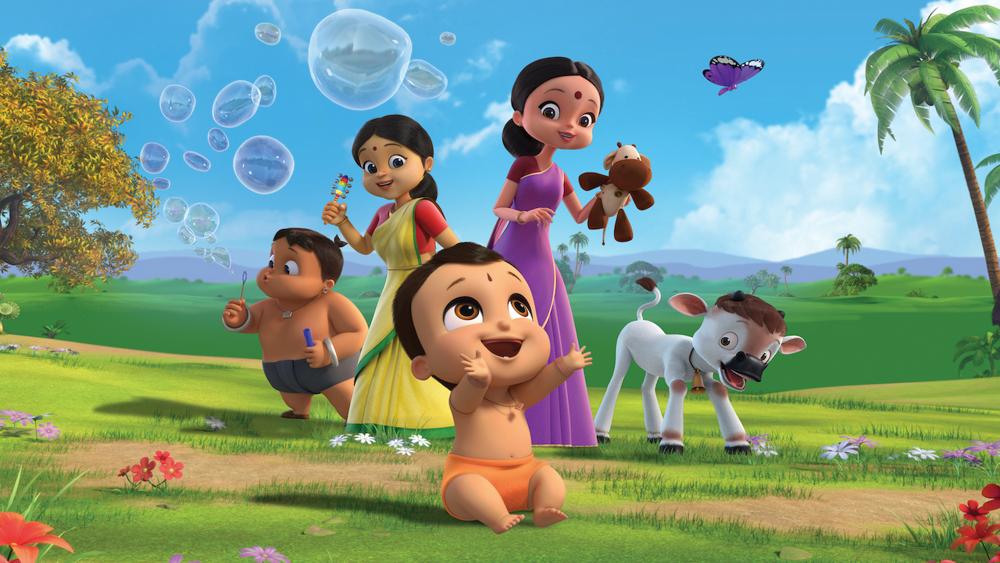 Jetpack Distribution has acquired worldwide rights for global hit Netflix original Mighty Little Bheem, produced by India’s Green Gold Animation. The quirky, non-dialog preschool series will be offered for pay TV, free-to-air, catch-up and in-flight at MIPCOM 2020. The series comprises Season 1 (21 x 5’30”), Season 2 (26 x 5’30”) and special episodes (3 x 6′). Netflix’s first original animation produced in India debuted in 190 countries in 2019, with more than 27 million households around the world streaming the series and helping it attain the streamer’s No. 1 pre-k spot in the U.S. The show also achieved a record-breaking 1.5 billion YouTube views and was the most-watched video on the official Netflix kids channel.

Mighty Little Bheem is the international spin off of India’s most beloved animated character, Chhota Bheem. It follows the adventures of toddler Bheem, whose boundless curiosity – and extraordinary might – lead to mischief and adventure in his Indian town Dholakpur. He travels across Dholakpur making friends with everyone he meets in search of his favorite treat, ladoos (an Indian sweet). 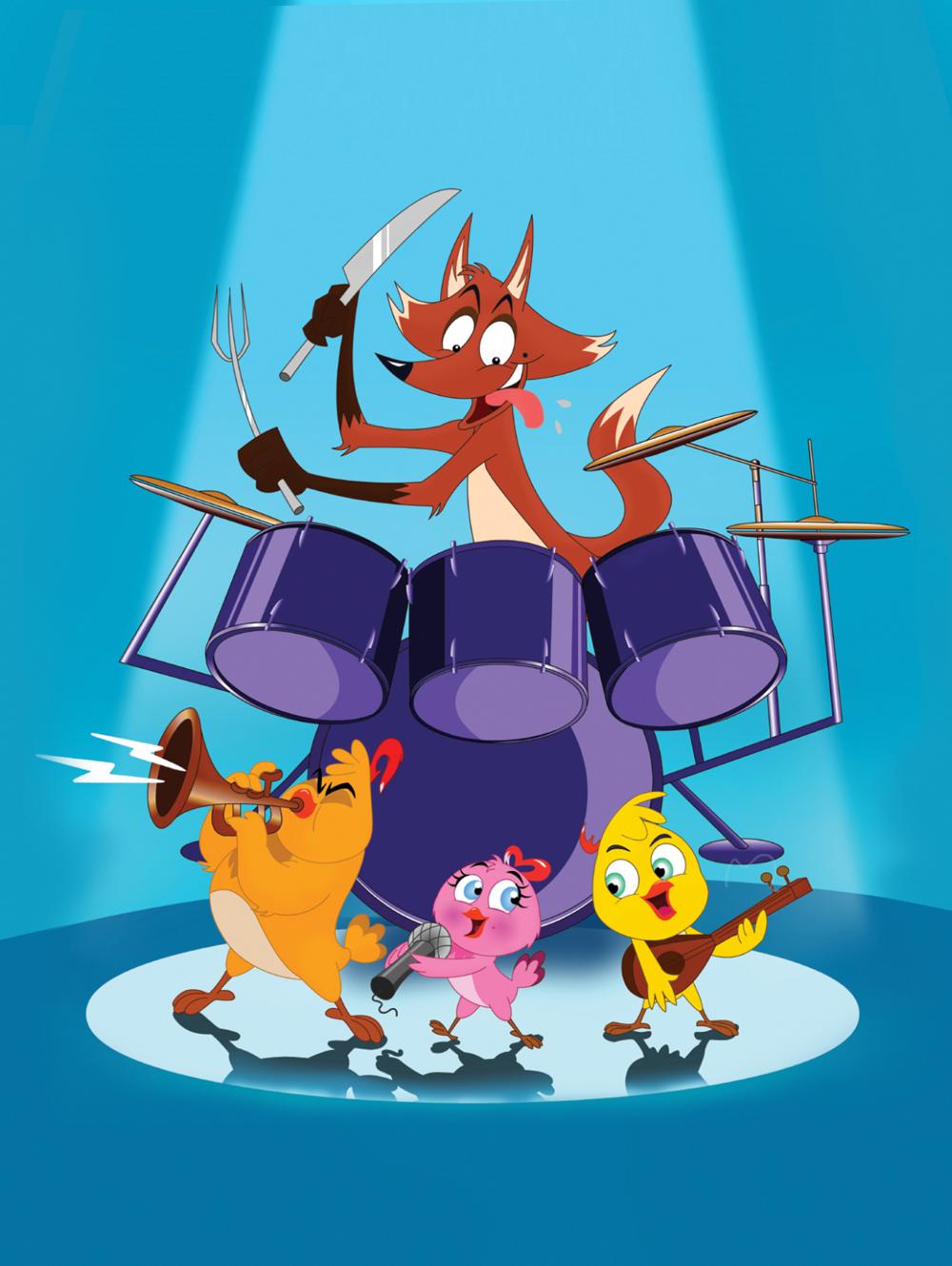 WildBrain Spark and Cosmos-Maya have joined forces to grow non-dialog comedy Eena Meena Deeka. The partners will co-finance Season 3 of the 2D-animated series, to be produced by Cosmos-Maya for delivery in Dec. 2020. The new season will roll out alongside S1 on a new exclusive YouTube channel, launched and managed by WildBrain Spark. Cosmos-Maya created the series and handled the production and distribution of the first two seasons worldwide, engaging audiences in over 100 countries. WildBrain Spark will hold AVOD and other distribution rights for S1 & S3 outside India and the Indian subcontinent, and will also spearhead ad sales for Eena Meena Deeka on AVOD platforms in the same territories. Cosmos-Maya retains global linear television rights for the series. Worldwide rights for season two are held by Netflix.

Eena Meena Deeka is a slapstick action comedy series full of gags, which tells the story of a constant chase between a cunning fox and three chicks – Eena, Meena and Deeka. The perennially hungry fox is forever on the prowl for these chicks who are always at the ready to foil his plan and out-fox him. Every failure goads the angry but determined fox to devise even more elaborate plans to outwit them in each passing episode, which usually ends up being a wild chick chase. 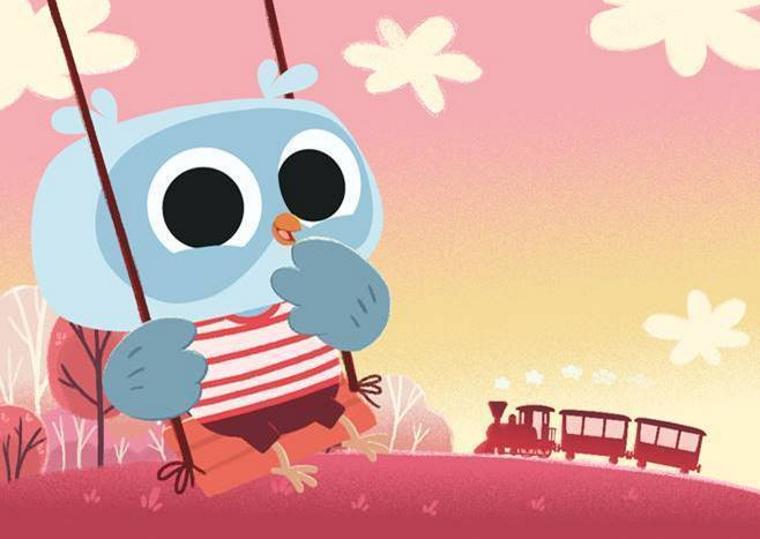 Meta Media Entertainment has been appointed as the worldwide distributor for Croatian 2D preschool series Who Who. The show, formerly known as Little Who Who, was the winner of last year’s MIP Junior Best Pitch when it was presented by ]Recircle (Nutz, Tree & Bee). The animation has been commissioned by Croatian pubcaster HRT. Simon Rolph (Wussywat the Clumsy Cat) is co-creator and head writer on the series. The project was supported by the Croatian Audiovisual Centre (HAVC), the city of Zagreb, and the MEDIA Sub-programme of Creative Europe.

The series is about exploring the world, diversity and social-emotional challenges through the eyes of a curious little owl called Who Who, as he discovers the world and meets new people. Who Who lives above the clock tower at Tiny Hill station at the heart of Big Forest with his mum, Mother Who, the station chief. Each episode, someone new alights at the station to await their next train. No matter who it is or where they are from, Who Who and friends welcome them into Tiny Hill with open arms, before involving them in an adventure where someone’s problem needs fixing or there’s a puzzle to solve. 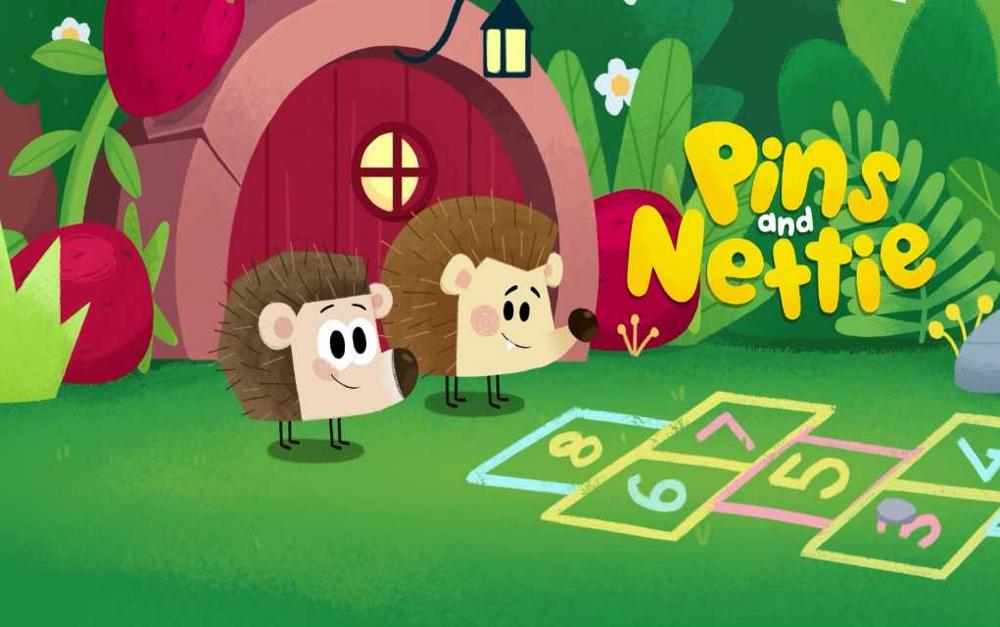 Monster Entertainment is launching Daily Madness’ new series Pins and Nettie at this year’s MIPJunior. A raft of sales have already been made across the globe, with deals recently being signed with RTÉ in Ireland, Showmax in South Africa, YLE in Finland and Hopster in the U.K. The 26 x 5′ series is aimed at a 2-5 year old audience and explores the very real issues of shyness and anxiety in preschoolers. First pitched at Cartoon Forum 2019, production is being completed at present.

Hedgehog best friends, Pins and Nettie, alongside their friend the narrator, explore the sometimes difficult feelings associated with shyness and anxiety. Co-creators Lindsey Adams and Shannon George teamed up with research expert and educational consultant Karen Leavitt to design a bespoke Shyness Curriculum that ensured that the series would hit the right note with its young audience. As a result, this series will empower the youngest of audiences by teaching them to recognise their feelings of shyness, and supplying them with all the tools they need to build both their self-esteem and their social skills. 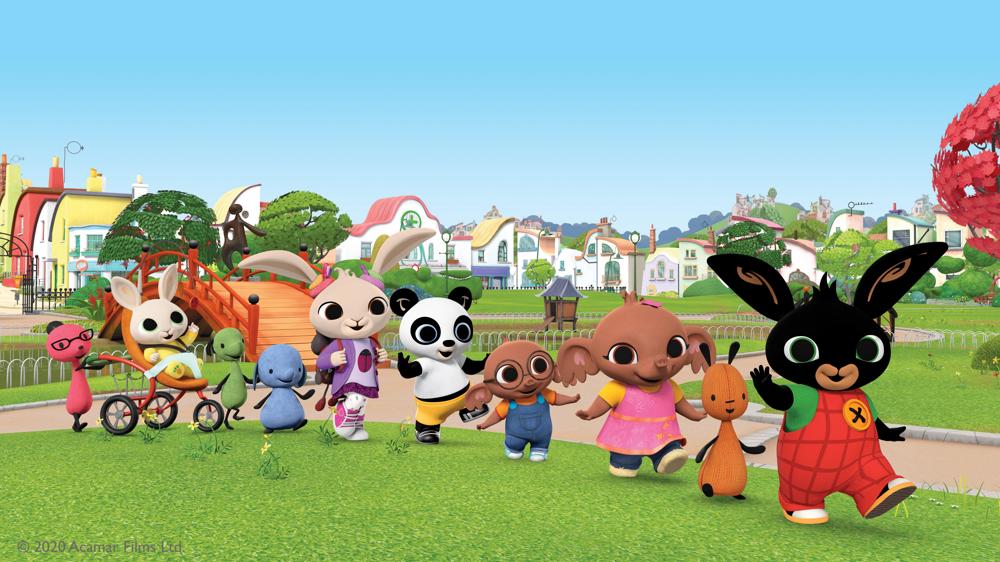 Acamar Films’ International Emmy Award-winning preschool series Bing continues to go from strength to strength, thanks to a significant new deal signed with Italian free TV broadcast partner Rai. Bing – currently rated currently #1 on the Rai YoYo app – has enjoyed huge commercial success in Italy following its launch in 2018. This new deal further strengthens the partnership with an extension of rights for S1-S3, and the acquisition of S4 (debuting by end of year).

Italian episodes are also available to stream and download (along with a suite of learning games and activities) via the recently launched app Bing: Guarda, Gioca, Impara, and Bing’s Italian language YouTube channel – which currently generates an average of around 30 million views each month. Bing will continue to be available via Italian VOD platform TIMVision (currently producing Bing’s first ever sign-language version) and on DeA Junior, where it is the #1 show on-air. Bing will make its Amazon Prime Video Italy debut in October. 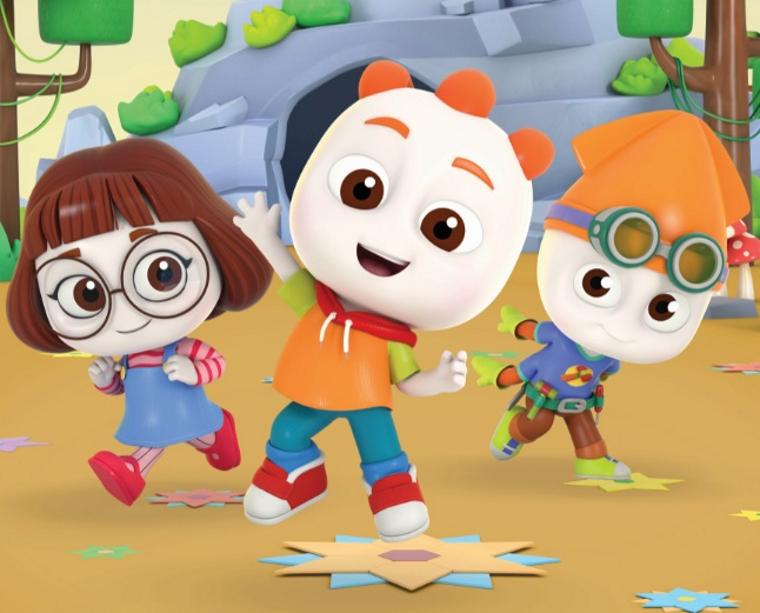 Distributor Planet Nemo by Ankama has sold two new preschool series to Discovery Kids in the Middle East and Northern Africa (MENA, both launching October 25. Super Builder is a 13 x 11’ preschool show produced by Benlai about a spirited team of young construction vehicles, called into action to lead the renovations in the town of Sunshine Bay. The 66 x 11’ series Ollie & Friends is produced by Infinite Studios and welcomes kids to Ollipolis, a fantastic world where shapes come to life. 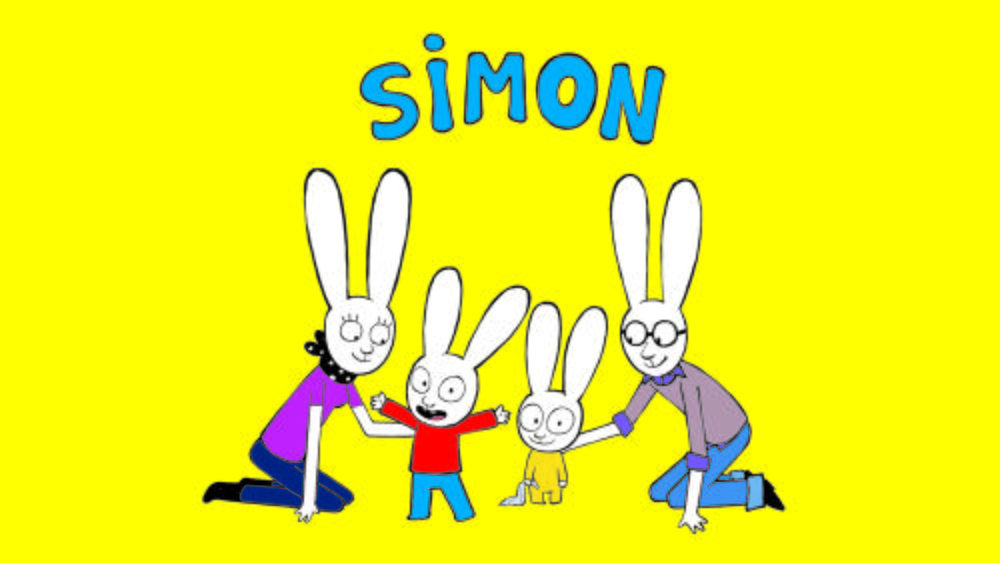 GO-N Productions continues to build upon the successful commercialization of global preschool hit Simon produced by GO-N in collaboration with France Televisions. The Paris-based producer/distributor has secured broadcast deals in additional territories with the completion of Season 3 and full delivery of 156 x 5’ episodes. New pick-ups include Tiny Pop (Sony Picture Television) in the U.K., Canal Panda (Dreamia) in Portugal, IVI.ru in Russia and TVNZ in New Zealand.

GO-N has also inked a new development deal with France Televisions for a fourth season of its iconic IP. The previous seasons were about children exploring everyday life, this new season will take young viewers into a world of superheroes! Production is due to start in 2021 for delivery by Summer 2022.