Episodes will also be available on the Disney Junior app and Disney Junior VOD beginning Jan. 15 and on iTunes Jan. 16. Starting Dec. 25 on the Disney Junior app, kids can unlock daily content including short videos and mini-games via a Hot Dog Hills interactive map counting down to the show’s premiere. A suite of games featuring each “Fabulous Five” character will arrive on the app Jan. 15.

Rolling out internationally throughout 2017, the series takes Mickey, Minnie, Pluto, Goofy, Daisy and Donald and their unique transforming vehicles on humorous, high-spirited races around the globe — as well as hometown capers in Hot Dog Hills. Off the track, Minnie and Daisy also run their successful Happy Helpers business, solving problems for anyone in need. Aimed at kids 2-7, Mickey and the Roadster Racers is designed to impart social and emotional lessons about friendship, teamworks, optimism and good sportsmanship.

The production team is headed by the Emmy-nominated creatives behind Mickey Mouse Clubhouse and Jake and the Never Land Pirates: EP Rob LaDuca, co-EP and supervising story editor Mark Seidenberg, and story editor Thomas Hard. Mickey and the Roadster Racers is a production of Disney Television Animation. 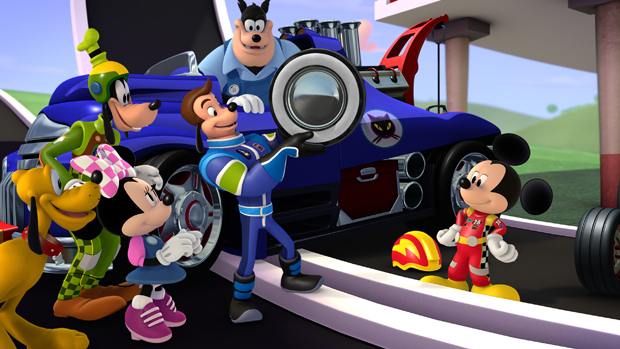 Mickey and the Roadster Race