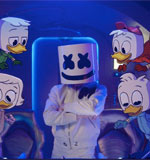 Popular music producer and DJ Marshmello is taking a quack at a new animated frontier with Uncle Scrooge, Donald and the rest of the gang from Disney Channel’s popular DuckTales. The new animation/live-action mix music video “Fly” is set to debut this Saturday (June 23)  during the airing of Disney/Pixar’s The Incredibles (6 to 8 p.m.), leading into the 2018 Radio Disney Music Awards (RDMA) (8:00-10:00 p.m.) on Disney Channel.

The music video, which will also be available in the DisneyNOW app, finds Scrooge, his nephew Donald, great-nephews Huey, Dewey and Louie and their friend Webby into a musical outer space adventure. When their spaceship unexpectedly crashes, they encounter an alien DJ on the remote Marshmello planet.

‪Marshmello will also perform at the 2018 RDMA and is a top nominee with four nominations. His music video “Fly” was released in March and has nearly 48.5 million views on his official YouTube channel.  His chart-topping singles – featuring collaborations with Selena Gomez, Khalid, Migos, Logic and more – have garnered more than 2 billion streams across Spotify alone and with more than 40 million monthly listeners, he is Spotify’s #4 Most-Streamed Artist in the World. 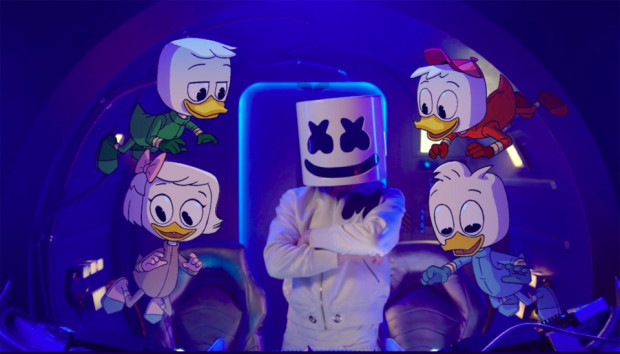