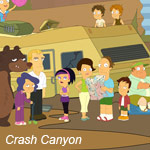 Just when you thought you’d seen every possible variation on the animated family sitcom, a new show comes along that manages to shake things up and deliver laughs along the way. Breakthrough’s new series Crash Canyon, which was conceived by Jam Filled Entertainment and developed by Joel Cohen, exec producer of The Simpsons, centers on the Wendells, a typical Canadian family who accidentally drive off a cliff during a vacation and end up at the bottom of a remote canyon. The crazy thing is that the canyon is home to many other people who have driven, skydived or cycled to the deserted area—and none of them seem to be able to leave! Think of it as a Canadian Gilligan’s Island in a canyon! 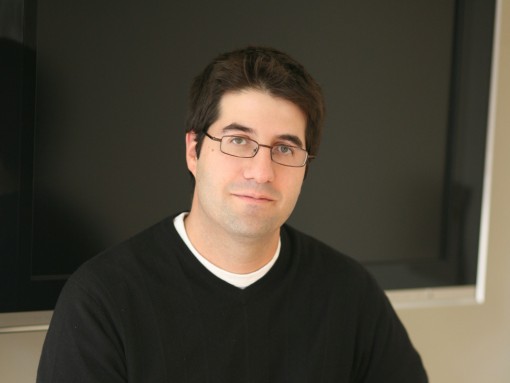 For Cohen, who also begins his 11th year of working on the grandfather of primetime animated shows The Simpsons this summer, the show provided a chance to work on a new idea and build a series from the ground up along with colleague Greg Lawrence.

“We are working with a limited budget, so we know that we can’t cut to all these different locations,” says Cohen. “Our characters are stuck in this canyon in Alberta, so we really have to be creative. It’s been a fun challenge, because I’ve been spoiled working on bigger projects, where you have a full writers’ room and expensive animation and the chance to change stuff if things don’t work. But I have to say that despite the challenges, when you watch the show, it looks terrific and you can’t tell that we work with a smaller budget. We can’t let Fox know what we were able to do without a huge budget.”

The Flash production on the series is handled by the talented team at Toronto’s creative studio Elliott Animation (Total Drama Island, Stoked), which brings more Canadian involvement to the production. “I don’t think we set out to bring an intentionally Canadian tone to the show, but it’s set in Canada and our family is Canadian,” notes Lawrence. “We never sat down and said, ‘Let’s make a Canadian show.’ For some reason, some people go out of their way to avoid following the standard American sitcom structure, but I think that’s a mistake. I believe that’s how a story should be told. From a visual standpoint, I also wanted the show to look and feel like a prime-time series you would find on Fox.” 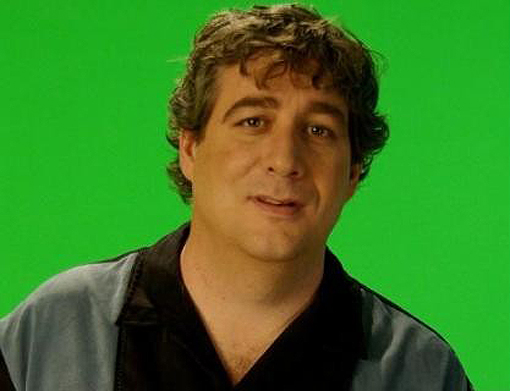 Nevertheless, Cohen also points out that there are lots of inside jokes throughout the show that Canuck viewers will get, but may get unnoticed by others. “If you watch it in the States, you can’t tell it’s Canada, but we have references to specific Canadian stores and such.” In addition, the voice cast is also mostly Canadian and works out of Toronto.

What Lawrence loves about the show is that it has a very clean and specific theme and concept.

“I really liked that fact that the premise was very clear—it was a ‘fish out of water’ comedy and the notion that there was no escape appealed to me as well.”

Joan Lambur, Breakthrough’s exec producer of animation and family programming, says she’d wanted to work with Cohen for many years and jumped at the opportunity when the creators at Jam Filled pitched. “I was thrilled that he shared my excitement and came on board right away,” notes Lambur. “Teletoon followed with equal enthusiasm, followed by Greg Lawrence. It’s become an amazing team working on a very funny show!” 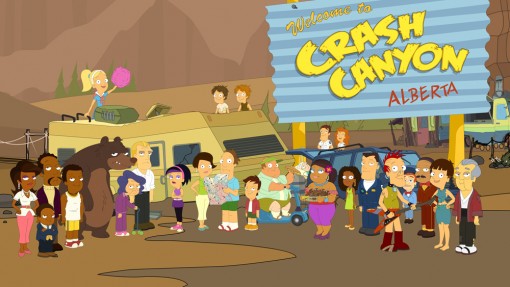 Oddly enough, neither Cohen nor Lawrence had a burning passion to work in animation when they were growing up. Cohen says he was more impressed by the idea of a joke and its execution, while Lawrence admits that he never gravitated to animation, although he is a fan of Looney Tunes (Foghorn Leghorn, to be specific). “My heroes were always writers,” says Lawrence. “Whether they worked in animation or not didn’t matter at all. I just loved a good joke!”

Hopefully, viewers will appreciate many of the jokes the team has packed in each one of the 26 episodes of Crash Canyon. The series will be right at home with co-producer Teletoon’s primetime adult block, along with shows such as Futurama, Archer and Robot Chicken. MTV will also distribute the show worldwide (except the U.S.) in 2012.

Breakthrough’s Crash Canyon premieres on Teletoon on September 18 at 9 p.m.