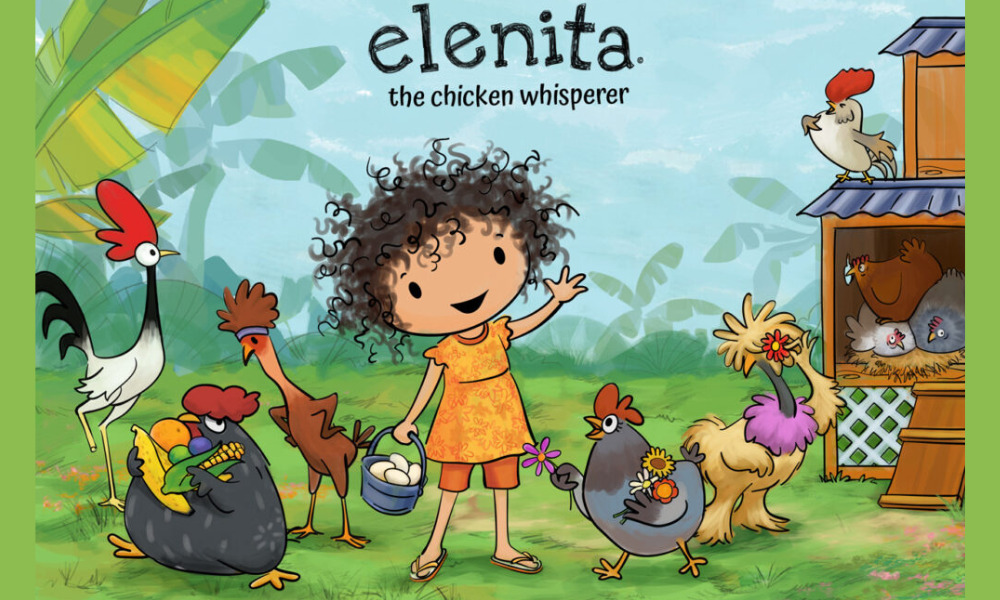 Puerto Rico-based production company Mana-T Studios has joined forces with Bernice Vanderlaan to take their original property concept Elenita the Chicken Whisperer to the next level. Announcement of the partnership was made jointly by David Wollos and Joan Luks for The ThinkTank Emporium.

Elenita the Chicken Whisperer (Elenita La Encantadora de Gallinas) centers on an imaginative girl growing up in the country with an incredible love and curiosity for animals and nature. Elenita also has an amazing ability: she can talk to chickens! Along with her best friend and hen, Nita, and a hilarious flock of eccentric chickens, Elenita will have fun and unusual adventures that teach her important life lessons while discovering a connection with nature. One of her dreams when she grows up is to have a bird sanctuary. The series targets a preschool audience.

Elena Montijo, creator and art director at Mana-T Studios, bases Elenita’s stories on real events from her childhood, which are full of humor and innocence.

The series brings award-winning wrter and story editor Vanderlaan back to her roots, as she too grew up on a farm and had two wacky pet chickens. Vanderlaan will further develop Elenita for presentation to perspective production partners and streaming platforms. “Elenita’s enormous heart and her playful flock of chickens sparked my imagination right away,”  the writer enthused. “I am thrilled to join such a creative group of Chicken Whisperers!”

Over her 25-year career, Vanderlaan has developed and story edited both live-action and animated programs, including Remy & Boo, Nina’s World, Angry Birds Stella and Blues, The Chica Show and Life with Derek. She has also written for hit series including Alma’s Way, The Magic School Bus Rides Again, The Cat in the Hat Knows A Lot About That and Max & Ruby.

“We are very excited to have Bernice as part of the Elenita team. Her writing style is so complimentary to our vision,” said Montijo.

Mana-T Studios is a 2D, 3D animation, comics, pre and post production company. Founded by Tommy González, the studio covers everything from conceptualization to postproduction, while offering a library of its own content and intellectual properties for exploitation across all platforms

The ThinkTank Emporium is an intellectual property consulting and representation agency founded by distribution executive David Wollos and licensing executive Joan Packard Luks. TTE works as a strategic partner and  advisor to your business to develop a strong brand foundation that grows property and takes it across multi-media/entertainment platforms and merchandising globally.