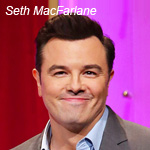 Before we bid farewell and godspeed to the beloved space-faring misfits of Matt Groening and David X. Cohen’s Futurama, toon fans will get to enjoy a special treat (and you don’t even have to beg for it!) as Family Guy creator Seth MacFarlane wags some voice talent tail in an upcoming episode on Comedy Central.

EW.com reports the multi-talented MacFarlane will appear in a brief cameo and give voice to Fry’s ever loyal canine, Seymour, who because a fan-favorite after the tearjerker 2002 episode “Jurassic Bark.” Cohen told the outlet that this will be the pooch’s first and only spoken dialogue. “Since Seth voices Family Guy‘s talking dog, Brian, we thought it would be funny to have him blatantly rip himself off for our benefit,” he continued. “As an added bonus, the only person he can sue is himself, so we’re off the hook.” MacFarlane is not a total stranger to the show: he lent his musical talents in 2009 for the DVD movie Wild Green Yonder‘s theme song.

The episode is set to air August 14 and will find the Planet Express crew journeying into Fry’s dreams to complete a mission in the year 1999. Sarah Silverman will also reprise her role as Fry’s 20th century girlfriend Michelle for this adventure. Other celebrity guests for the seventh and final season of the hit toon sitcom will include Emilia Clarke, Larry Bird, George Takei, Adam West, Burt Ward and Dan Castellaneta. Season 7 kicked off this week, new Futurama episodes air Wednesdays at 10 p.m. (9 p.m. Central) on Comedy Central. 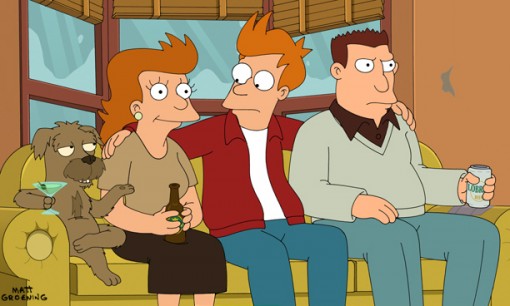 ‘Evangelion 3' Among U.S. Premieres at JFF
It’s Good to Be the ‘King’s’ New Guy