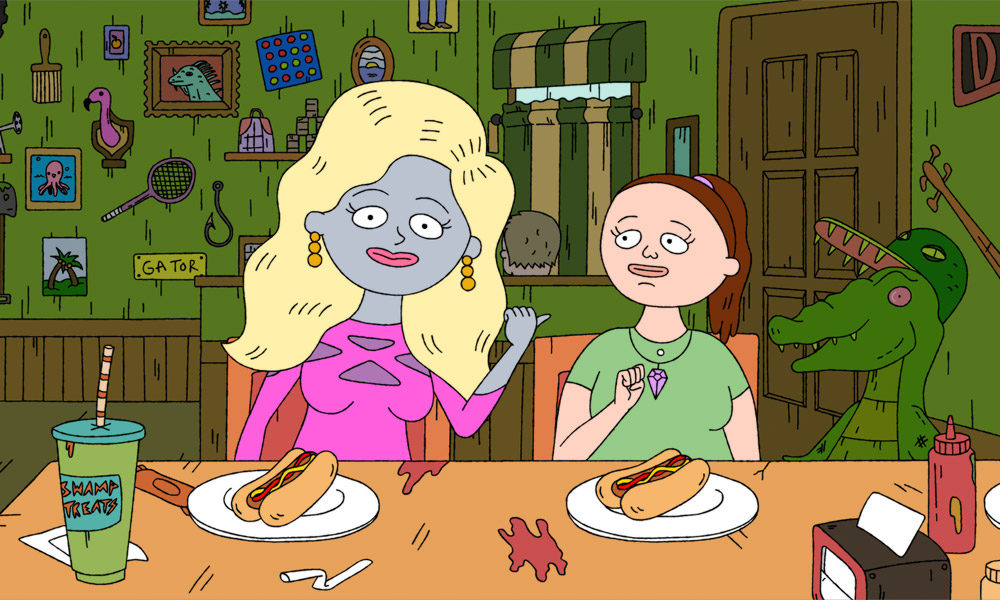 The fall of 2021 might be the best time for Teenage Euthanasia, an adult animated show described as a “dystopic coming-of-all-ages comedy about death, family and accidental resurrection!” Co-created by Alissa Nutting, author of the acclaimed book Made for Love, and Alyson Levy, the Emmy-nominated producer of shows such as The Shivering Truth, Wonder Showzen and The Heart, She Holler, the series feels like a warm hug from a long-lost, loving and totally insane relative. 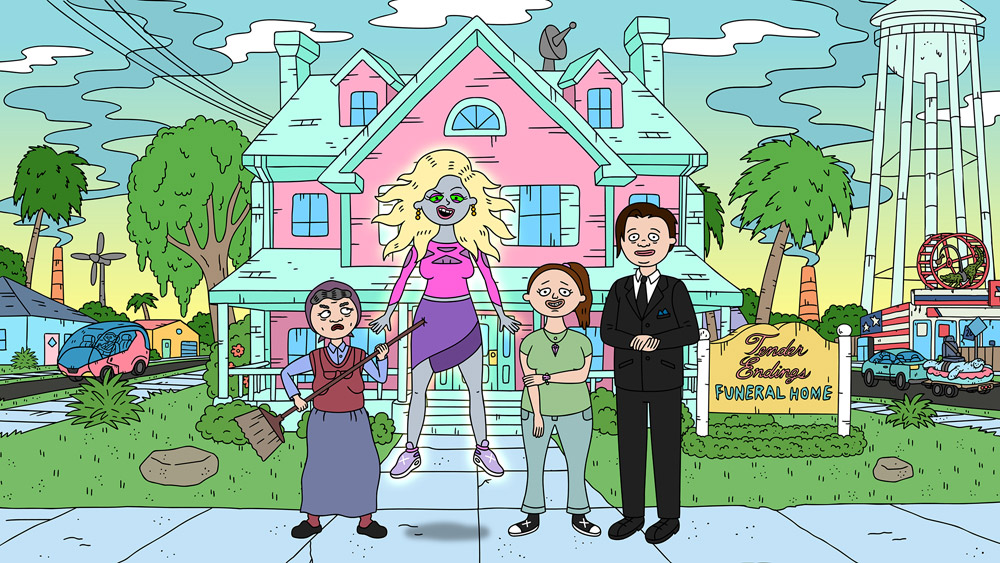 Animated by the talented team at Brooklyn’s own Augenblick Studios, the series follows the misadventures of the Fantasy family and their inland Florida funeral home, Tender Endings. The clan includes Trophy (voiced by Maria Bamford), who’s magically brought back by from the dead by a lightning bolt; her teen daughter Euthanasia, called “Annie” (Jo Firestone); Annie’s Uncle Pete (Tim Robinson) and “old country” grandma Baba (Bebe Neuwirth). We watch in horror and wonder as Trophy gets a second chance at being a better mother as a resurrected zombie!

We were fortunate enough to get a sneak peek as the dynamic duo of Levy and Nutting get ready to introduce their show to the world. Here’s what they told us: 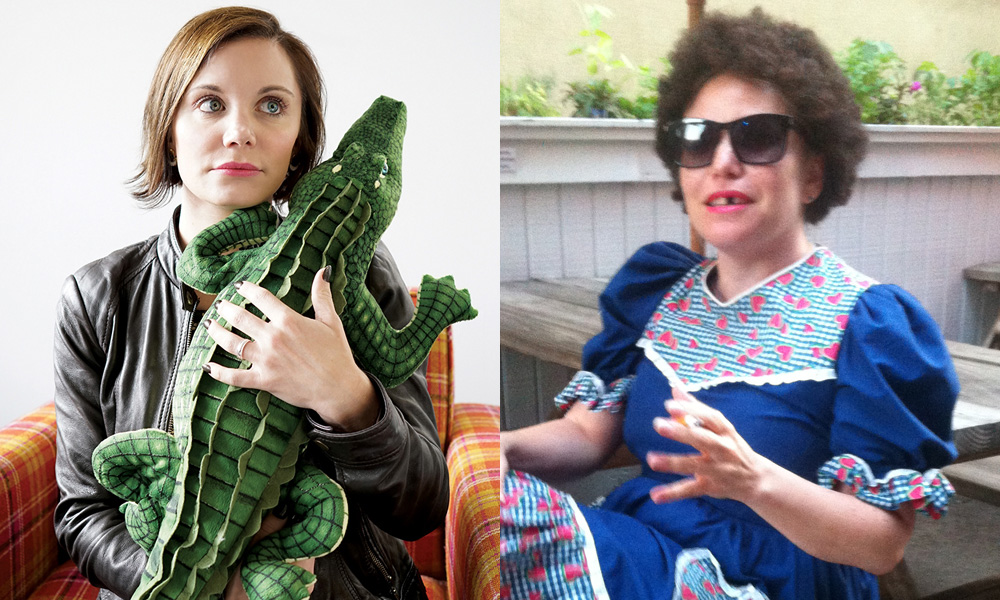 Animag: We know it took a few years to deliver your animated baby. Can you tell us a little bit about how you came to make the series?

Levy: I had been with Adult Swim for years and I had this two-pronged goal to, first, make a show with women, and to make a half-hour animated show, which was something that was never done. Then, I happened to read Alyssa’s short story collection, and I was super excited to find someone with a similar, weird sense of humor. I knew we would really connect. So, we decided to work on an idea for a show together. Well, it took years, because we started in 2016!

Nutting: The show went through many iterations. What was really important for us was to have female characters and a main teenage female front and center. We wanted it to be different and weird. I guess you can say a lot of exoskeletons were shed before we settled on this particular brand of weird!

Levy: We were leaning into the mother-daughter theme, as we were both mothers of daughters. I watched Gilmore Girls with my two daughters who are 12 and 15. I was thinking about what my version of the show would be like. So, we wrote a spec script of the pilot and in the summer of 2017, we gave it to Mike Lazzo [former exec VP of Adult Swim] and he loved it. So they wanted us to make an animation, and that’s when Augenblick Studios came in. 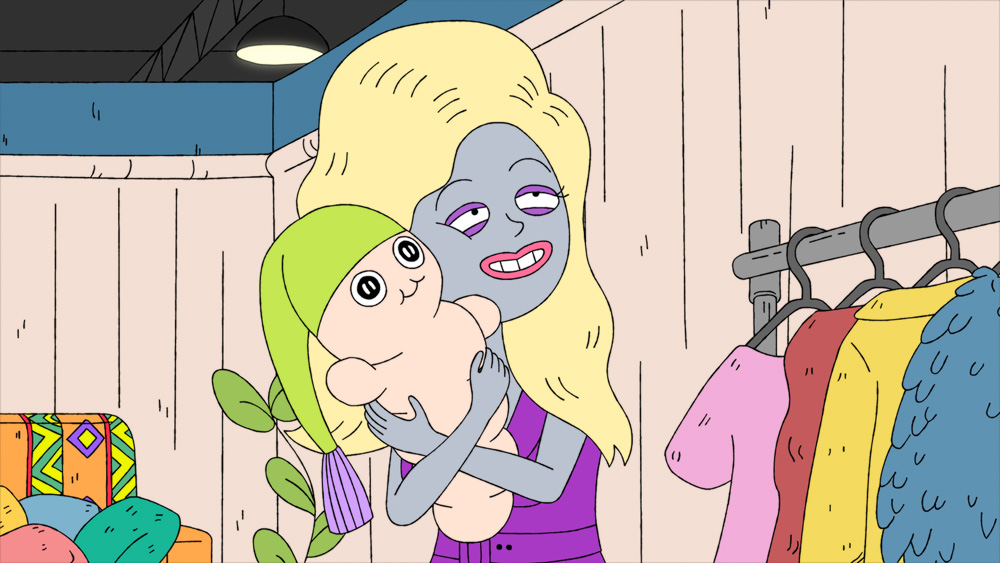 What about the name of the show? Did anyone ask you to change the name?

Levy: You know, when we were pitching the show we simply described it as a show about a teenager named Euthanasia, so it fit pretty well. Basically, a lot of the show is about Euthanasia’s relationship with her mother, and how we all carry a lot of baggage in life based on our family relationships. In no way did we consider the name to be gratuitous. Nobody told us to change it either and everyone seemed to agree with us and liked the title too!

Can you describe the show’s visual inspirations?

Levy: Neither I nor Alyssa are visual artists or [drawing] types. Very early in the process, I was trying to find the right visual inspiration for the show and I went to this Brooklyn comic-book festival, and there were hundreds of comic-book artists on display. That’s where I saw Abby Jame’s books (Heart Shaped Tears, The Teenage Condition), and I read her stuff and realized she was the perfect person for us. All three of us got together, and she did concept drawings. Her own stuff is a few degrees different from where the show’s look landed, but she became a vital part of the show and became the show’s art director. She’s super funny, as well.

What were some of the toughest aspects of getting the show made over the past four years?

Nutting: Of course, the pandemic created the same challenges for everyone. But this was one of my first work experiences of making an animated show — and to this day, because I live in Los Angeles, I have never met anyone at Augenblick Studios in person. Luckily, I met Abby prior to the pandemic. Getting to do a completely remote COVID show was something to get used to.

Levy: The challenges for us are never coming up with ideas for the show, but neither of us had made a half-hour animated show before. We were learning throughout the whole process. We are getting better and communicating. We found a great group of people to produce the show with. Nothing has been an overwhelming challenge. 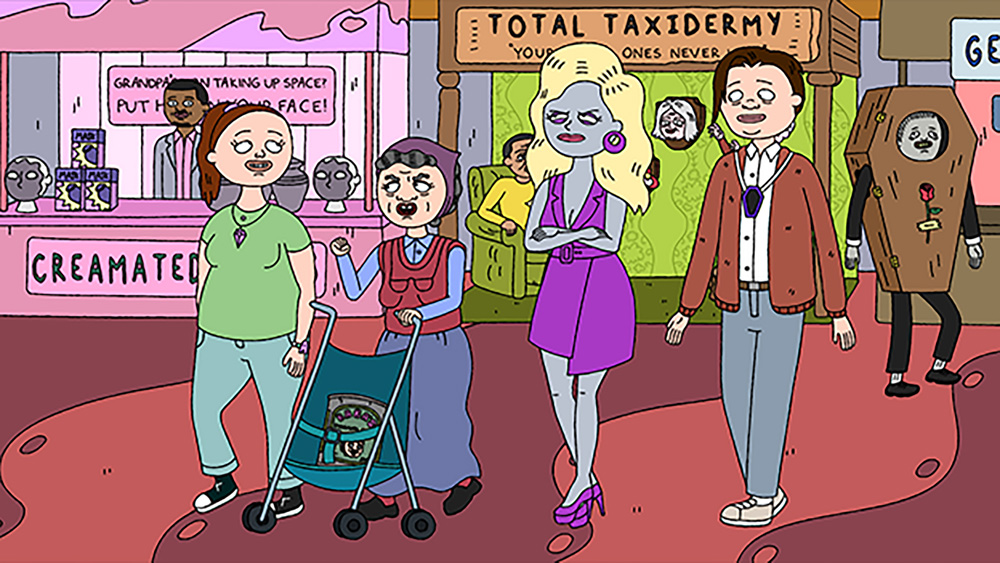 How did you end up with such a cool voice cast?

Levy: It helped that we had the pandemic and people wanted to work! I think it was a combination of that and the fact that people who read it seemed to like it. We didn’t get any nos. I had my own personal list of people I loved working with, and our casting person did a great job of getting a lot of fantastic voice actors that we had never thought of.

Nutting: I feel that we had a terrific cast, and our four main actors helped us nail the characters. It was a two-way process. Jo Firestone was also in the writer’s room, and she has been our inspiration for Annie. As we wrote the characters, we could hear Annie’s voice in our heads. The same thing happened when Maria, Tim and Bebe got into the studio. We tweaked the dialog to showcase everything that they brought to their characters.

Adult Swim used to be known as a late-night destination for young, white male audiences. But luckily, that has changed over the past few years. How do you think your show is helping usher in a new era?

Levy: This has been a real passion for me during my entire time at Adult Swim. As a deeply weird person, I appreciated that there was a place for me there. I always had male partners, though. But I felt that there was a place for weird women like me out in the universe, too. That’s why it’s super exciting for me that our show is finally going to be out there. There are so many stories and jokes that you couldn’t do. Sometimes, when I was on other shows, they wouldn’t do certain jokes because they figured it was too sexist to do. I wanted to give everyone the chance to tell their jokes and stories. Hey, women can be as boring and mediocre as men.

Nutting: I had this very false idea that doing animation was easier than doing live action — and boy, did I get relieved of that notion. I am so grateful that we have put such an incredible, female-driven team at Augenblick. I am really in awe of the process, of how painstaking it is and how much work goes into it. I had no idea it took hours of labor to produce a 10-second clip. It’s truly a phenomenal process. 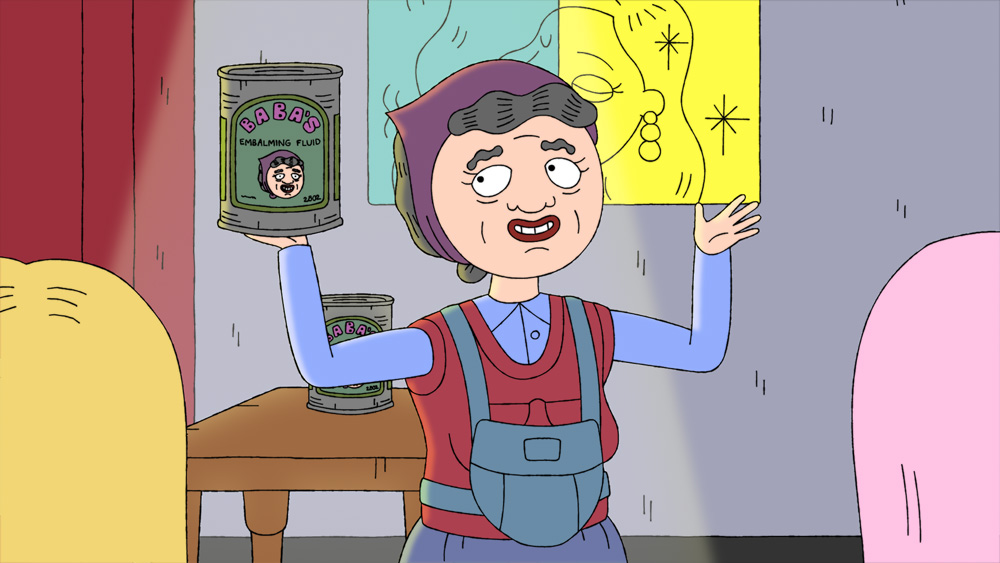 What do you hope your show brings to the entertainment landscape?

Levy: First of all, I hope people think it’s super funny. I really hoped to write the funniest show we could. I also hope that they connect with the characters and laugh with them.

Nutting: I have always looked at humor as an antidepressant. It’s about taking your own pains, joking about them and seeing the absurdity of it all. My favorite books, art and TV shows are the ones that make me laugh and feel comforted. I feel our show can make people feel less alone as they see what the characters go through and relate to their struggles and disappointments. I think our show is a very good pandemic show. Hopefully, it will make you happy and take you away from reality.

What are some of the animated shows that made a big impact on you?

Levy: I’ve been watching Bob’s Burgers with my kids. I think it’s a perfect animated show. Back when I was a kid, I used to really love watching The Flintstones — in a funny way, it figures in our show. You can see animal-driven vehicles pop up. That’s because of my Flintstones‘ upbringing. Interestingly enough, I never saw my own experience reflected on TV in any live-action or animated shows. It was revelatory for both me and Alyssa that we rarely saw anything that represented the two of us. That was a driving force for the show.

Nutting: It’s a cliché, but The Simpsons was so formative for me. I loved it as a kid and always wondered, why isn’t all of TV animated and why can’t everything be so good? Ren & Stimpy and South Park also expanded my mind about what a show could do. But that template is always from male creators. That’s why creating this show has been such a dream come true and such a victory, because I’m a lifelong fan, but I rarely saw my own experiences in those animated shows. 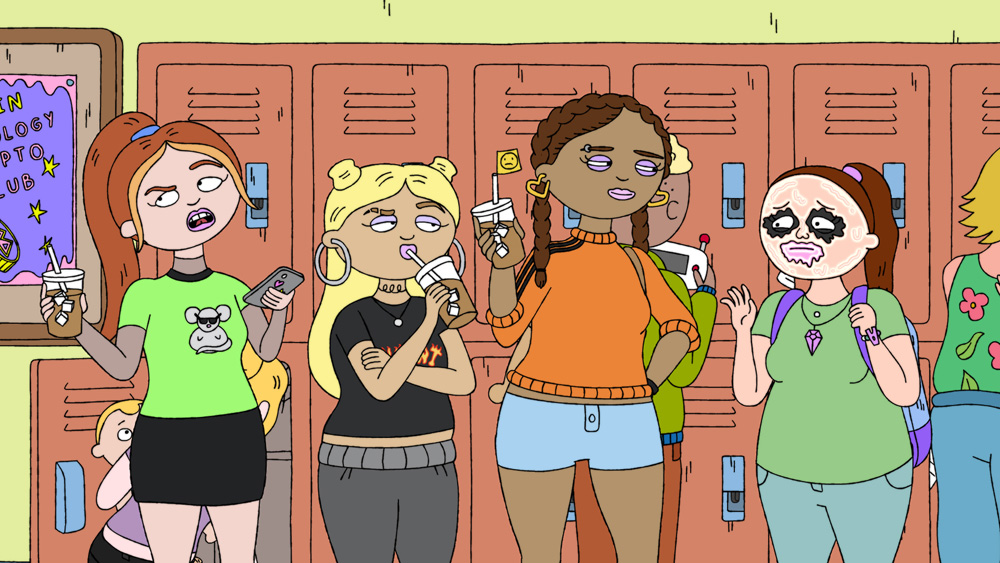 What was the biggest lesson you learned from Teenage Euthanasia experience?

Levy: There were many times when you think, forget it, it’s never going to happen and this project will never get to series. My kids and friends kept asking me, ‘Are you still working on that?’ But I had a good feeling that this time it would happen. If you have that feeling, you have to keep going. Our show was a perfect example. It really took four years. Hopefully that’s something that I don’t have to learn again!

Nutting: I can really say that working with Allyson was a huge part of why I kept going and why I wanted to continue the process. I was having so much fun, but even though I wanted the show to get picked up, I truly loved the process and enjoyed every minute of working on it. We were in that bubble for so long that it almost seems strange for other people to see it now. Having something that makes you so passionate in your life is the real gift.

Teenage Euthanasia premieres on Adult Swim on September 19 at midnight.