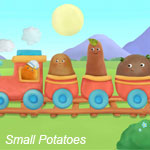 Small Potatoes, the newest short-form preschool series from Josh Selig and Little Airplane Productions, is set to premiere Sept. 6 in the United States and will air daily on Disney Channel’s Disney Junior programming block for kids 2-7 and their families.

The series premiered on CBeebies in the spring where it took three of the top five spots on the CBeebies iPlayer during its very first week, including the No. 1 spot. The series has also had successful launches on the ABC in Australia and Canal+ and Piwi in France.

Each episode contains one Small Potatoes music video and two comedy sketches. The members of the band are Ruby, the diva, Nate, the artist, Olaf, the caretaker, and Chip, a quirky little spud. The band’s songs cover every popular musical genre, from Motown to reggae and rock & roll. Composers and lyricists for Small Potatoes include such luminaries as Jerry Bock, Tony Award winner for Best Musical and Best Composer and Lyricist of the classic Fiddler On The Roof. All the music for “Small Potatoes” is produced by Little Airplane’s three-time Emmy Award-winning Musical Director, Jeffrey Lesser. The series was created, directed and executive produced by Josh Selig, Founder and President, Little Airplane Productions.

In conjunction with the U.S. launch, SiriusXM’s Kids Place Live will air a one-hour radio special. Titled Small Potatoes, Deep Roots, it introduces America to the band and covers their history. The radio show includes narration by the legendary British actor Malcolm McDowell who voices the role of the band’s manager, Lester “Loops” Koop. The special will be preceded by an interview with Josh Selig and Kids Place Live’s Absolutely Mindy host Mindy Thomas. The radio special will air five times leading up to the television show’s launch on Disney Junior, with the premiere radio broadcast on Sept. 2 at 9 p.m. (ET) and 6 p.m. (PT) on Kids Place Live, channel 78.

Although the show has yet to hit the airwaves in the U.S., Small Potatoes has already become a phenomenon on Facebook, with more than 1,000 new Facebook ‘likes” each week. Check out the Small Potatoes Facebook page at http://www.facebook.com/thesmallpotatoes.

“Fans all over the world are discovering the Small Potatoes both on-air and on-line,” said Selig, “And once Small Potatoes begins airing on Disney Junior in the U.S., we anticipate Potato-Mania will be sweeping the globe!”

Small Potatoes has already won a 2010 BAMmie award at the 12th annual BAMkids Film Festival for “Best Film for 2-5 Year Olds.” This award is given out each year by The Department of Education & Humanities at the Brooklyn Academy of Music.