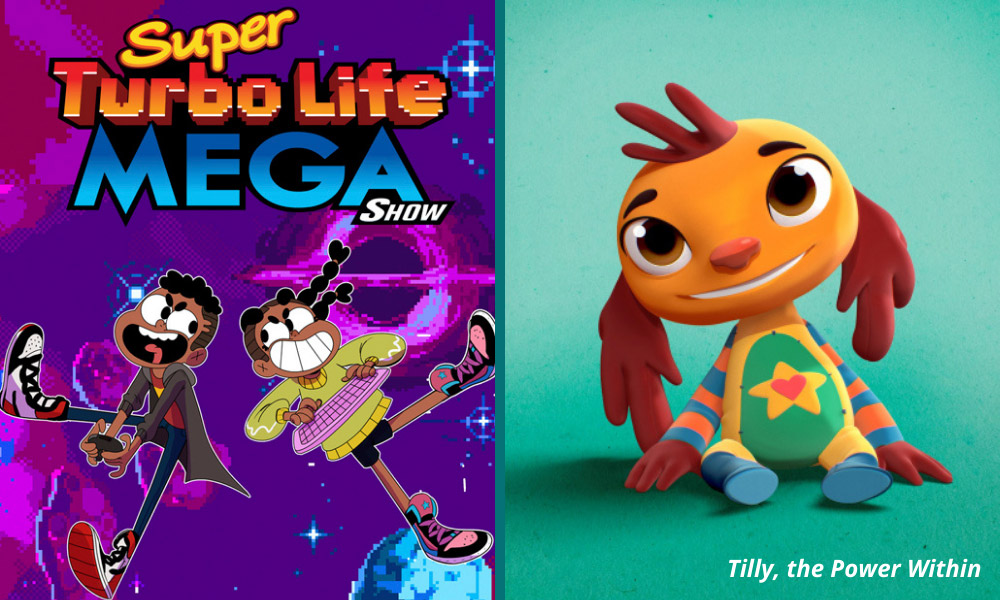 Leading European family entertainment company Planeta Junior and David Steward II’s Lion Forge Animation (Academy Award-winning Hair Love) are partnering to produce content that challenges expectations and conveys their shared values of diversity. The partnership kicks off with the joint production of two original kids’ series Tilly, the Power Within and SuperTurbo Mega Show, with a third to be announced soon.

Tilly, the Power Within is an animated series that will help children overcome their uncertainties. The show celebrates diversity through inclusive storytelling that embraces building new habits while celebrating customs and traditions. SuperTurbo Mega Show plays off the design of popular Twitch streams to deliver an innovative series that speaks to gamers and their lifestyles.

“We live in a time where children often feel isolated in real life and media. We want to tell stories where they feel represented and seen. I’m glad to say we found great partners in Lina Foti and Lion Forge Animation, extremely talented people who share our same values and mission,” said Paula Taborda dos Guaranys, Creative Executive Director at Planeta Junior.

Lion Forge Animation President Carl Reed said, “Authenticity is the hallmark of everything we do at Lion Forge and we take great pride in showcasing it through original, entertaining content that connects with kids in every part of the world. We’re happy and excited to be working alongside the like-minded team at Planeta Junior to introduce new series that are reflective of our mandate.”

Tilly, the Power Within (52 x 11′) gives four- to seven-year-old children the tools to explore the world and feel confident in unfamiliar situations. The series follows the adventures of stepsiblings Gem and Joe. When Gem and her father move from the countryside to the big New City, Joe is over the moon to show Gem around and learn from her. The show extols the virtues of diversity through inclusive narration that ranges from instilling new habits to celebrating new traditions — and Tilly is at the heart of it all. This soft toy comes to life to help the children find the inner confidence they need to achieve their goals. The story is created by executive producer and creator Lina Foti, based on a concept from children educators Pury Estalayo and Daniel Lovecchio.

SuperTurbo Mega Show (52 x 11′) is a 2D gamer comedy for kids six to 11 based on KoldKrush and PizzaBlade, a sister and brother team who run a popular livestream gaming channel from their adjoining bedrooms! Playing off the design of popular Twitch streams, SuperTurbo Mega Show follows this speedrunning pair as they compete head-to-head in video game challenges that speak to gamers and their lifestyle.

The production of these new animation series consolidates Planeta Junior’s position as a leading coproducer of original family entertainment, alongside projects like Milo, Superpigs, Power Players and Gormiti.

Lion Forge Animation is one of the only Black-owned animation studios in the world, and is unmatched in size and scale. It is the only Black-owned animation studio with an Oscar, having produced the culturally resonating short Hair Love, directed by Matthew A Cherry. The studio continues to expand its IP portfolio with the development and production of TV series and feature films. Upcoming projects include a Hair Love spinoff series (Young Love) for HBO Max; the animated series Heiress with BRON; Rise Up, Sing Out, executive produced by Grammy-winning artists Tariq “Black Thought” Trotter and Ahmir “Questlove” Thompson, for Disney; and multiple projects with Imagine Kids + Family including Chippy Hood, First Step and Bugtron.

Established over 20 years ago, Planeta Junior is a Grupo Planeta and De Agostini company which develops and produces entertainment content with leading international content creation companies, including ZAG Animation, On Animation, SuperProd, Kotoc, Cottonwood, Studio 100 and Animoka. Planeta Junior productions include hits like Gormiti, Power Players, That’s Joey, Mutant Busters, Heidi and Maya the Bee, in addition to a powerful line-up of projects in development.