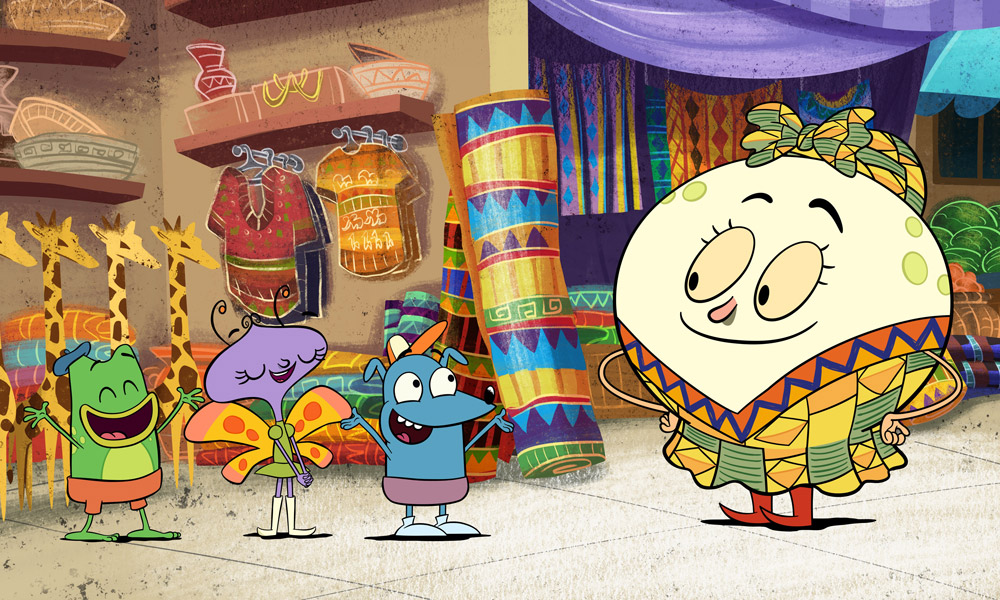 9 Story Media Group announces the Season 2 greenlight of their hit animated series Let’s Go Luna!. Premiering on PBS KIDS this month, the new season will follow Leo, Carmen and Andy around the globe as they travel to 16 destinations with Luna the Moon, voiced by Judy Greer (Archer, Ant-Man, Jurassic World).

Let’s Go Luna! (52 x 11′), produced by 9 Story’s award-winning animation studio Brown Bag Films, encourages kids ages 4-7 to explore and appreciate world cultures while developing social skills. Each episode consists of two 11-minute animated stories based in one country in order to help kids better understand the traditions and local customs associated with each destination. Working alongside a group of cultural anthropologists and experts to ensure each region is authentically and respectfully portrayed, storyboard artists create visually-driven narratives to highlight each city’s distinctive features.

“This new season gave us the opportunity to return to some of our favorite countries, but also to explore new cultures and cities around the globe,” said series creator Joe Murray (Rocko’s Modern Life, Camp Lazlo). “Now more than ever, we need to teach children about cultural traditions outside of their own household while we continue to promote the acceptance of others.”

Let’s Go Luna! follows the adventures of three animal friends — Leo, a wombat from Australia; Carmen, a butterfly from Mexico; and Andy, a frog from the United States — as they travel the globe with their parents’ traveling performance troupe, “Circo Fabuloso”. At each stop, Luna the Moon guides the trio as they learn about the local region, its people and traditions that make each place unique. Along their travels, the characters learn of a traditional folktale associated with each new location. From language and music, to food and art, each episode ends with a reminder that there’s always more to see, learn and experience with each place you visit.

In the Season 2 premiere (airing May 10 on PBS stations, the PBS KIDS 24/7 channel and PBS KIDS digital platforms), the trio sets out on adventures to Reykjavik, Iceland; Delhi, India; and Kumasi, Ghana.

For more Let’s Go Luna! resources, games and full episodes visit pbskids.org and the PBS KIDS Games app, including the new Luna’s Postcards Around the World game. Follow along on Facebook and Instagram for new announcements, clips and tips for parents (@LetsGoLunaHQ).

New ‘Pokémon Master Journeys: The Series’ Debuting This Year
‘Sponge on the Run’ Hits the Home Video Road in July