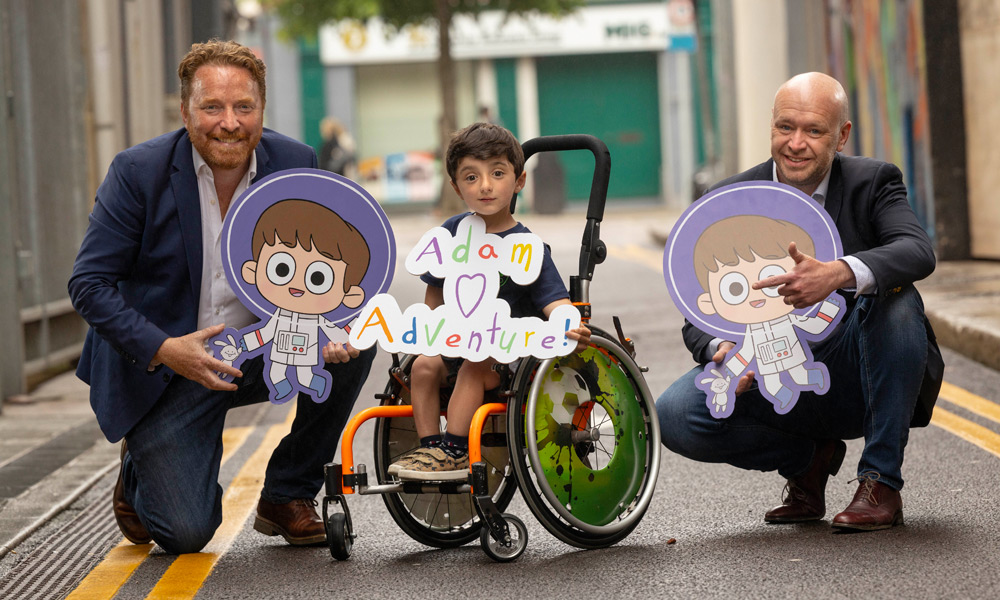 Award-winning Irish animation studio Kavaleer Productions have announced a collaboration with The Late Late Toy Show star Adam King to develop Adam ❤ Adventure!, a preschool adventure-comedy series set in space, but with an environmental slant. Inspired by and starring Adam himself, the show aims to promote his message of empathy and friendship (exemplified by his ‘Virtual Hug’) a truly universal phenomenon.

The series kicked off development in April and has been selected for inclusion at the 2021 edition of the prestigious Cartoon Forum in Toulouse, France this coming September.

Adam ❤ Adventure! breaks new ground for young audiences in a number of significant ways: It will be the first Irish children’s program to feature a wheelchair-user as protagonist. With 150 million children living with additional needs worldwide, the show will introduce much needed on screen representation. In Ireland, one in seven people identify as having additional needs, but there is only around 2% on-screen representation.

Andrew Kavanagh, CEO of Kavaleer and the show’s creator, said “Adam stole the hearts of the nation when he appeared on The Late Late Toy Show last year. His message of following your dreams, no matter what challenges you face, inspired me to create this show. With Adam as our CapCom, we’re excited and thrilled to be embarking on our latest mission!”

“Our ethos at Kavaleer is to create innovative, ground-breaking shows that celebrate uniqueness and diversity in every child and support young hearts and minds to thrive. Adam ❤ Adventure! will be the latest hit from the creative team that created Kiva Can Do!, and co-produced household favourites such as Boy Girl Dog Cat Mouse Cheese and Pablo,” added Gary Timpson, MD and executive producer for the show. “We can’t wait to share the development with the world at Cartoon Forum in a couple of months’ time.”

Adam’s Father, David King, said, “Our family are delighted to share this exciting news with the world! We believe in the importance and power of representation of difference in the stories we tell our children. That is why we are thrilled that Adam, our beloved son and a child with additional needs, is going to be the star of this wonderful cartoon. Not only this, but his trusty friends Speedy (his wheelchair) and Bubby (his toy rabbit) will travel on all his adventures with him. Through this cartoon, we hope other children and families will benefit from the power of seeing difference represented in the wonderful stories and characters of Adam ❤ Adventure! Our deepest thanks to Andrew and all the team at Kavaleer. From the moment we first connected, we knew Kavaleer were the right fit for our family as we share the same values. We can’t wait to go on this adventure together!”

Kavaleer have enlisted Citizen Scientist Astronaut trainee and Global Faculty Member of the International Space University, Dr. Norah Patten as the show’s chief space advisor. As an ambassador for the Environmental Protection Agency (EPA), Norah is uniquely qualified to advise across the show’s space and environmental themes.

“Space provides such a truly unique lens for understanding more about our own planet and it gives us a perspective on humanity’s place in the universe,” Dr. Patten said. “I am thrilled to have this opportunity to be involved on the show with Adam; a little boy with big ambitions and big dreams and an inspiration to so many.”

The 2D animated series (52 x 11′) features comedy-themed quests, in which our eponymous hero and his crew are on a mission to help aliens around the galaxy solve problems (usually of their own making) using his space-smarts and altruistic personality. The prime-directive for the audience is to learn about how best to protect the most important planet of all — our own — through humor and empathy for the world around us. Key to the show’s messaging will be that through empathy and understanding, we can all make the world a better place for future generations.

Eimear O’Mahony, Executive Producer, Children’s and Young People’s Programming for RTÉjr, added, “RTÉjr are delighted to support Adam ❤ Adventure! for Cartoon Forum this year. Adam is such an inspirational boy and puts a smile on the faces of children and adults alike. I’m sure Adam ❤ Adventure! will be one of the star shows this year at Cartoon Forum.”