Those of us who can recall the early 1990s will always treasure the memory of MTV’s Liquid TV, the animated anthology series that launched cult shows such as Aeon Flux and Beavis and Butt-Head (1991-1994). Now that Mike Judge’s wise-cracking duo are set for their MTV comeback, it’s good to know that they cabler is also re-launching Liquid Television online (at, where else, LiquidTelevision.com)!

The first new offering on the revamped site is an awesome new animated music video, directed by Superjail! co-creator Christy Karacas. The toon celebrates Wallpaper’s party song “F****** Best Song Everrr.” We can’t get enough of the festive weekend party mood, the hot-sauce-in-boss’s-coffee –mug-scene and the super-cool dancing lizards. You can check it out for yourself at www.liquidtelevision.com 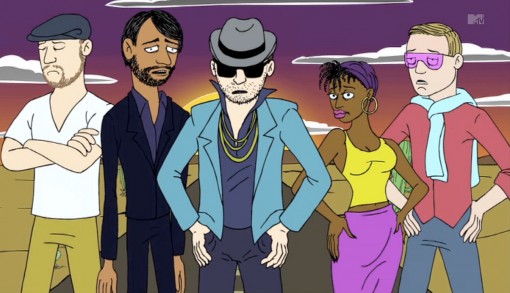 Disney Swims with Season 2 of ‘Fish Hooks’ in Nov.
Argentina’s Expotoons Ready to Roll in November