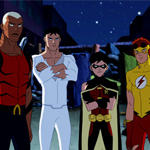 What is it about superheroes that keeps us coming back for more? Whether it’s escapist fantasy, the clean-cut morality of good vs. evil or simply butt-kicking appeal, the continuous surge of comic-book inspired projects never fail to find an audience. Fans of the DC Universe can catch the latest wave as Warner Bros. Animation’s Young Justice officially surfs onto Cartoon Network this month after its highly lauded one-hour premiere last fall. 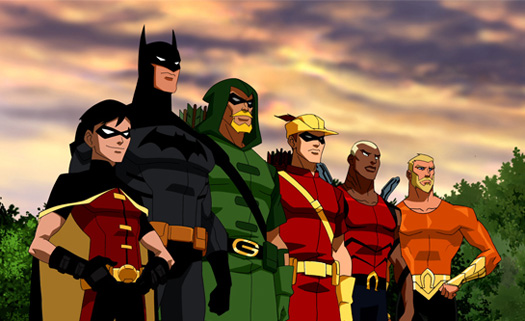 “One of the things that struck us about the Justice League is that you’ve got these guys like Batman, Superman and Flash who literally have these big-a** targets on their chests,” says producer Greg Weisman (The Spectacular Spider-Man, Gargoyles, W.I.T.C.H.), who writing career spans comic-books, animation, features and series. “…They’re too well known, too tracked; not just by bad guys but by the public and the press. That sort of dovetailed with the notion of young heroes looking to make a name for themselves.”

Weisman and fellow producer Brandon Vietti, a WBA veteran whose credits include Batman: Under the Red Hood, Superman Doomsday and The Batman, brainstormed this new take back in 2009 when executive producer Sam Register was looking for a Justice League project. “Register was very general in that first conversation about what became Young Justice. I believe his words were, ‘We kinda want to do something with the Justice League,’” Weisman laughs.

“When Sam brought up that he’d like us to try working with DC superheroes again, we looked at all the great DC shows; Justice League, The Brave and the Bold,” notes Vietti, “So many great DC shows have been done [at Warner Bros.] and our first concern was, how do we do another show in a way that’s not like what came before?” The duo became very interested in the idea of a covert-ops take on the classic characters, citing Batman and the Outsiders and military genre projects as inspiration for their new spin. 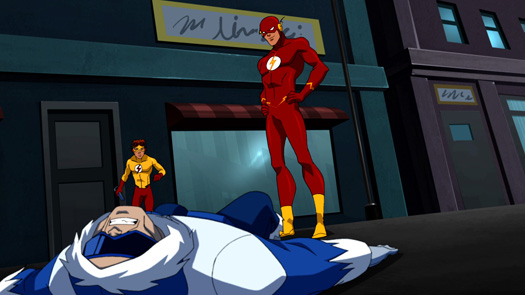 With such a vast assortment of supers to choose from, how could two self-confessed comic geeks like Vietti and Weisman ever hope to narrow down their core squad of exceptional teens? Especially when Weisman’s preliminary list had about 60 names on it.

“We picked from all different eras,” he elaborates, “I listed four different Robins, a couple of Wonder Girls, a couple of Kid Flashes—all sort of versions of all sorts of characters.” Under the guidelines that their world would be a relatively “young” universe, with the Justice League only in operation for about three to four years, the team narrowed down a chronologically sound and complementary group that “had the right group dynamics, the right grouping of powers, and each is a dynamic character.”

The supporting characters include the young squad’s “general” Batman and the youths’ mentors: Aquaman, Flash, Green Arrow, Martian Manhunter and Superman. Not to mention Black Canary, Red Tornado, Captain Marvel and the rest of the 16-member League.  The show already seems fully populated before you realize that heroes need villains, so enter Mr. Freeze, Queen Bee and a squadron of baddies to keep you on your toes. Even still, it’s a little shocking when the producers reveal they’ve already written about 170 named characters into the show, voiced by over 100 actors. 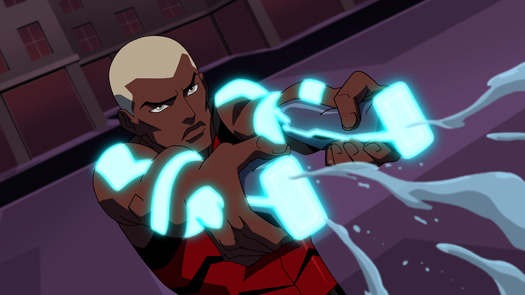 “If there’s a frustration on this show, it’s that I’d really love to do more with this or that character, but there’s no room for it,” Weisman laments, “We have to focus on core characters, so by the time you get to someone like Captain Atom, we just haven’t had room for him—I wish that wasn’t true, because he’s one of my favorites!”

Luckily for Vietti, there’s been plenty of time for some of his favorites in the first season. “As we started working with Superboy I got really into his character. Remembering back on story meetings, I would have the most ideas for him. I just really liked him and he’s really interesting to work with,” he shares, “I also like Aqualad because he’s a new character, and it’s really fun working him out.”

Neither producer-slash-aficionado can resist hinting that being picked up for further seasons would give fans a chance to see even more of their favorite DC characters, from the notorious to the somewhat obscure. But they’re crafty enough not to give any plans away … yet.

Suiting Up for Superheroics

As with any adaptation involving well known characters, there is ample opportunity for fans to get antsy about what has been done to their favorite heroes. Die-hards themselves, Weisman and Vietti had faith in their ability to bring their audience something new and exciting without sacrificing the familiar—and this was hammered home by the warm reception a sneak peak at Comic-Con 2010 and the one-hour premiere on Cartoon Network received.

“We have a great affection and love for these characters. It starts from that standpoint; we’re fans first and foremost,” says Weisman. “We have tremendous respect. We want to do justice by them … no pun intended.” 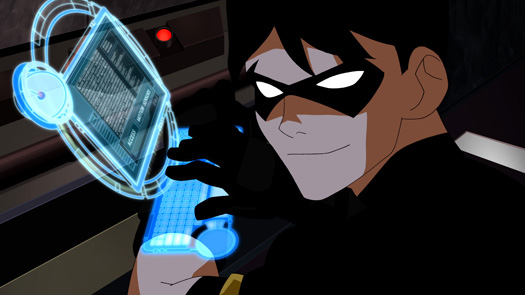 The producer notes that most fan-boy grumbling usually happens far in advance of anyone seeing the finished product—rumors get started, online forums blow up with outrage—but the key is to just be true to your super guys and gals. “A character who may have been around 75 years, or even just 20 … has had multiple, multiple writers and artists at DC. Lots of stuff, some great, some baggage … To appeal not just to hardcore geeks like myself but also to fans who’ve never heard of these characters before, it’s important to get down to the core of the character and respect that—the fundamental truth of the character.”

Vietti agrees, “I love the spirit here at Warner. It’s conducive to reinventing these characters with every new show that we do—as Greg said, we stick to the spirit of every character. We’re always trying to come up with new ways to tell these stories … My love for the genre and the characters is a given, but the storytelling aspect is what keeps me coming back.”

Part of what brings these characters to life is the focus on creating a realistic world for the series. “From a very early stage we wanted that to be one of the signatures of our show, to make it more grounded in reality than anything we’ve attempted in a series before,” Vietti explains. Each episode is dated and time-tracked to keep viewers committed to the story arcs as they unfold. Another reflection of this tact is the character design: “[We paid] more attention to the tailoring of the superhero costumes, so you get an impression of seams and padding and armor, and applying all this tailoring to the different heroes as it applies to their needs.” 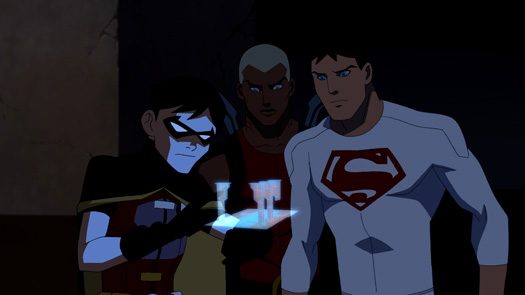 Charged with this custom tailoring job was lead character designer Phil Bourassa (Justice League: Crisis on Two Earths), who was instrumental in developing the look Young Justice. “The art is the keystone of the whole series,” Vietti insists, “The first thing people respond to is how it looks. It was really important that we find somebody who could draw in a realistic manner, but still friendly for animation. Phil kind of does that in his sleep!”

The carefully crafted series of 26 20-minute episodes is a large-scale labor of love. The producers rely on 20-25 artists, boarders, backgrounders, designers and color stylists to keep the show’s distinct aesthetic on track. Weisman, Vietti and writer Kevin Hopps work with a slew of freelancers to craft the pre-plotted story arcs across the season. The WB team pours blood, sweat and tears into each episode for roughly eight months before it’s sent to Korea to finish up the graphic 2D animation—a process of about four months.

“As each episode comes across my desk and we start to focus on it more—write, record, board, etc.—I get very excited at every stage,” Weisman shares, “Phil Bourassa walked in today with a design for one of the villains and I was like, that is so cool!” 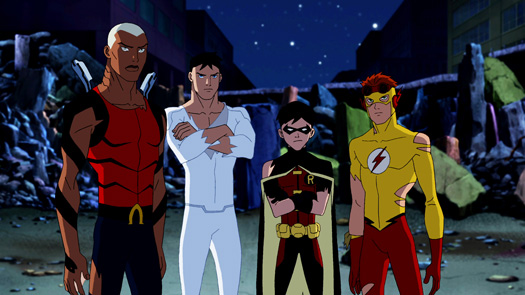 And according to Vietti, the entire crew has quite the geek pedigree—which is a boon to the show, although it can also be tough. “They’ve seen a lot of animation and they’ve read a lot of comics, and it can be a harsh crowd if you pitch a story in the office if it’s something they’ve seen before,” he reveals. But that all goes toward pushing Young Justice closer to the next frontier of comic-inspired shows.

When asked what powers they would choose if they were teenage superheroes, the duo recall youthful hours spent daydreaming about  super strength and power beams. These days they’re a little more practical; Vietti would like to soar over traffic (as would we all).