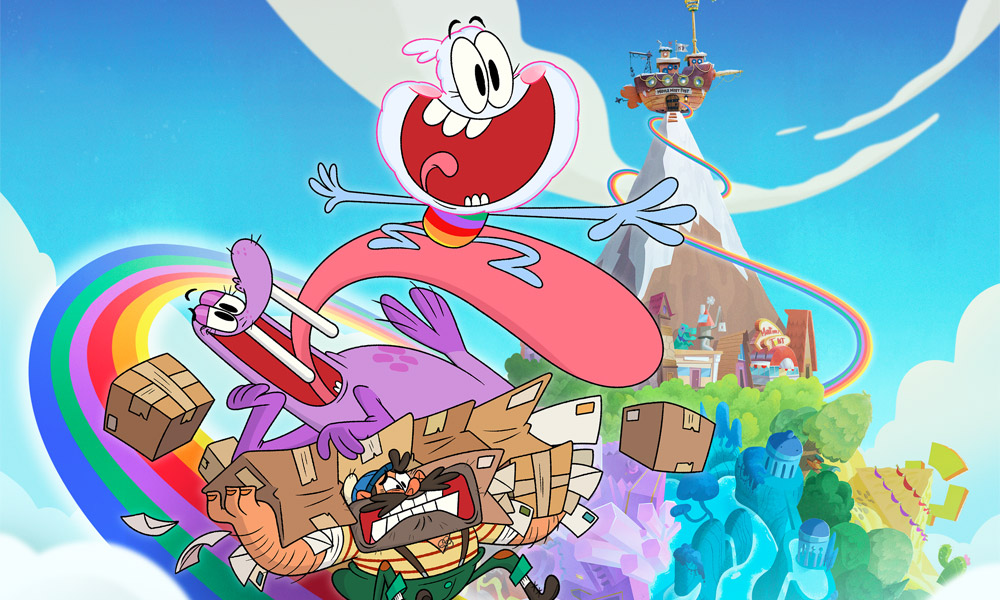 John Trabbic III, the creator of Middlemost Post, can’t wait for audiences to discover the wild, optimistic world of his new Nickelodeon show. “My own backstory is that of a troubled youth, who went down the wrong path, got into a bunch of trouble and then, hit rock bottom,” he says. “Then, I got sober and decided to turn my life around. That’s why the main character of the show is Parker J. Cloud, an exuberant character that used to rain on people’s parades. But he also decided to transform and shine.”

As Trabbic mentions, Middlemost Post, which is billed as Nickelodeon’s first original animated series in five years, centers on a dynamic rain cloud who lives and works in the Middlemost post office with Angus, a rule-abiding mailman, and Russell, their magical pet walrus whose stomach is so huge that it also serves as a storage room. The three unusual characters travel through Mount Middlemost and the “six territories of Somewhere” to deliver packages, meeting quirky people and having terrific adventures along the way.

The show creator’s partner in crime is exec producer and writer Dave Johnson. “I was brought in to help on the development side to work with show creators at Nick to get them ready for the greenlight process,” he recalls. “Middlemost Post was one of about half a dozen shows on the block, and it was the newest one. I loved the show concept, because it was weird and very character driven. John and I worked on the bible and wrote the pilot, and put it together in about nine months all the way to the pilot and presentation to the studio. It was the one show that really stood out and was greenlit in February of 2020.” 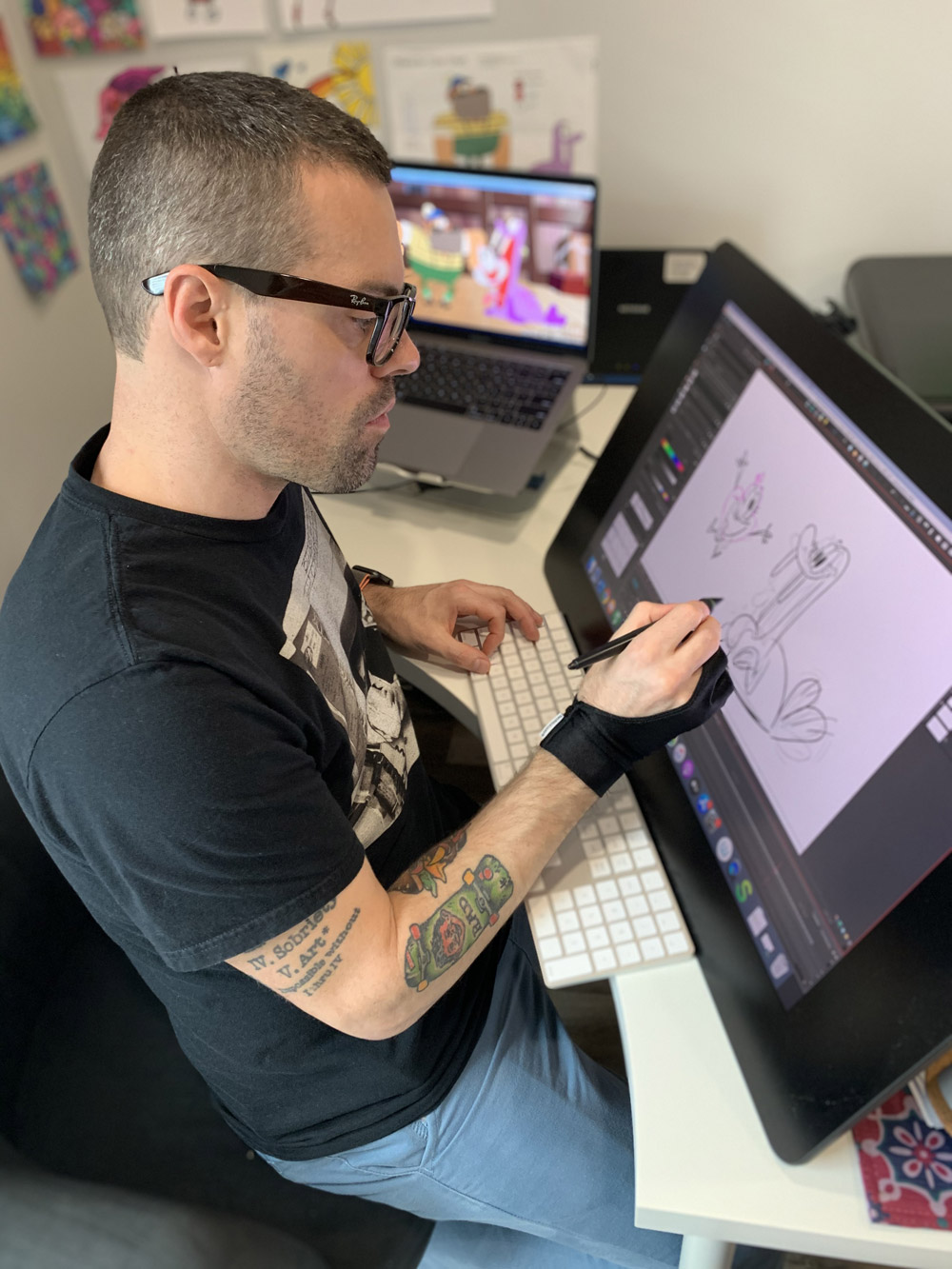 Trabbic and Johnson were excited about their new show and looked forward to putting their team together and to move to the new space for the production at the Nick studio in Burbank. Of course, that’s when the first wave of the COVID pandemic happened, and the studio had to shut down. “We were all sent home, so we ended up doing the show entirely from our homes, without even meeting our staff in person, and I think it has actually helped the show,” notes Trabbic, who worked as an Illustrator on the FX show Archer and moved on to be a storyboard artist for shows such as Pig Goat Banana Cricket and SpongeBob SquarePants.

“I guess you can say it was a blessing and a curse,” he adds. “We were so stoked to have our own offices, but then, I ended up doing the show in my garage! But as Dave mentioned, the whole working-from-home factor ended up being one of our strengths. We were presented with this challenge and didn’t let it get us down. We rose to the occasion and we’re proud of that!”

Johnson agrees. He points out that they had to change the rules to adapt. “People who know us, know that we like to go rogue once in a while,” he admits. “We’re always looking for a better way to do things. We learned quickly that having a writers’ room via Zoom is not ideal because only one person can talk at any given moment. So, we had to modify it to make it work for us. We learned to work more efficiently. We had three writers, a script coordinator and myself in the room, and ended up using more freelancers on the show. Both John and I did some of the voices on the show because we had to keep the number of the voices on the show smaller than usual, because not everybody had the equipment in their homes.” 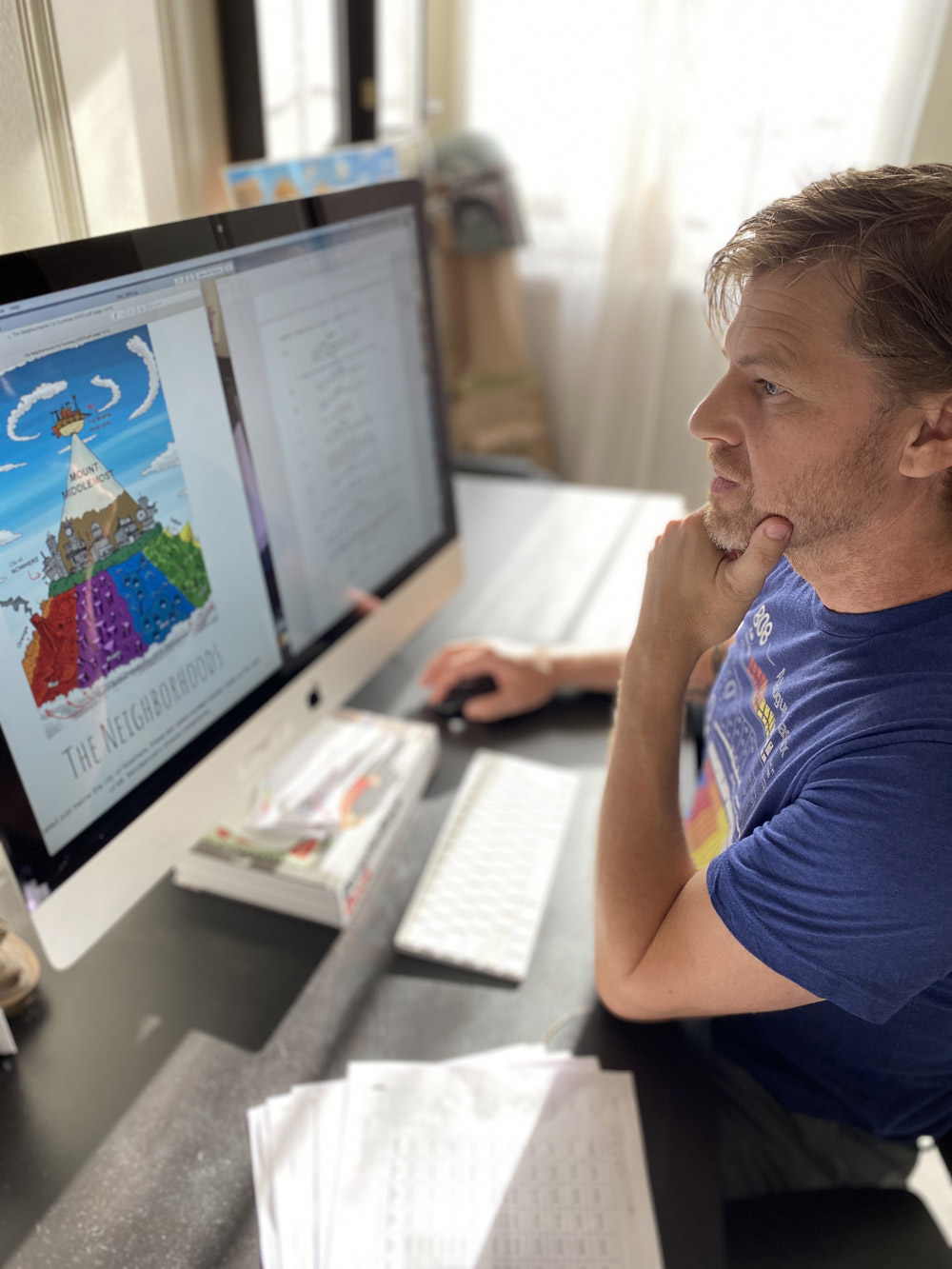 The show’s animation production is handled by a team of 200-plus at Toronto’s Yowza! Animation, which uses Toon Boom Harmony to create its 2D animation. Middlemost Post also incorporates some mixed-media animation. “A local Burbank stop-motion studio called Apartment D Films helps us with that,” says Trabbic. “We also use a lot of freelancers on some of the specialty projects, so there is some TVPaint, some Flash, and most of the show is done with Harmony.”

“I’m very proud of the work John does on the show,” says Johnson. “He’s one of the most creative people I know. He would just go to the craft store and buy the material and build it all in his garage. I’m a big fan of things like Pee-wee’s Playhouse and Mister Rogers’ Neighborhood, and we wanted the show to have the same kind of do-it-yourself feel.”

Trabbic says he has always been inspired by animated shows that are wacky, imaginative and that trigger wonders. “I love things like Tex Avery and Looney Tunes cartoons, Pee-wee’s Playhouse and even the California Raisins, because they were so wild and surreal,” he mentions. “I wanted the same things in my own show!” 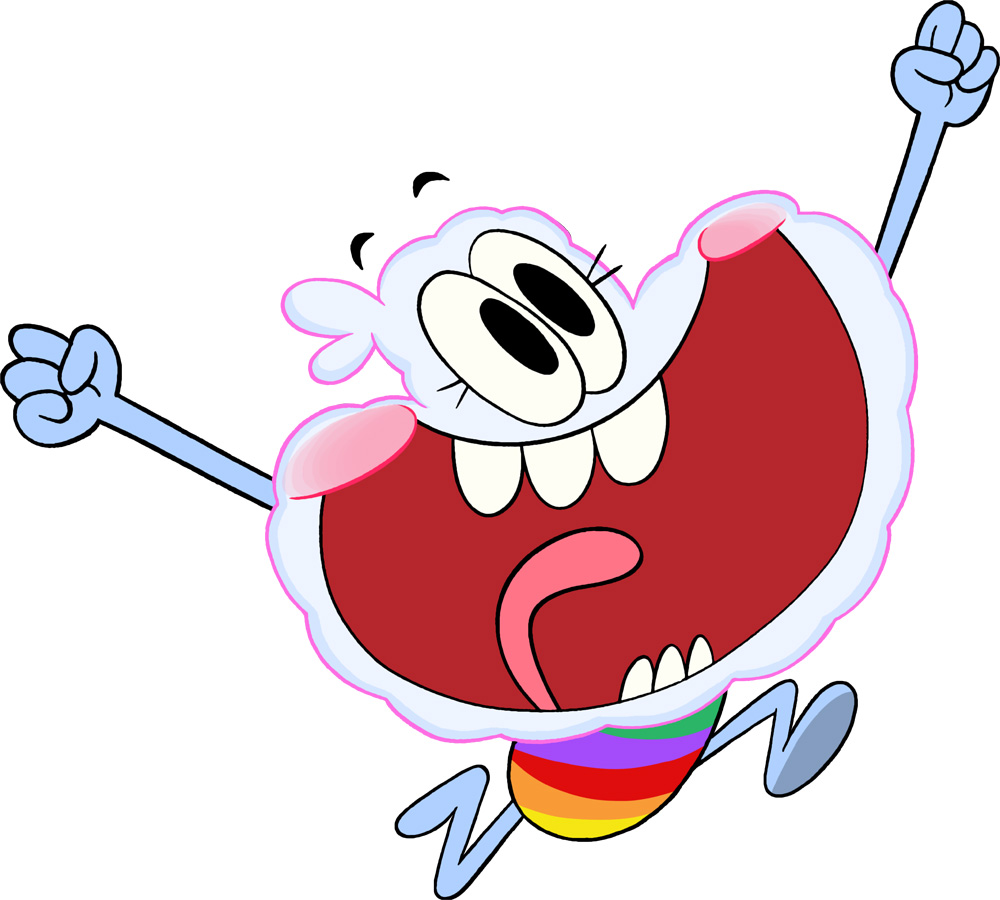 Going for the Dream

Trabbic remembers a time in his life when he had given up on his dreams and was working as a journeyman carpenter back in Michigan. “I was about 27 or 28, and my son was just one year old,” he says. “My wife and I had just bought our house, and I had the American dream, but I wasn’t fulfilled. One day, I came home from work and told my wife that I felt unsettled and wished that I could do art for a living. My wife said, ‘We can move in with my parents and you can go to school!’ So, that’s what I did. I quit my job, sold my house and went to art school.”

So, Trabbic studied art for three semesters, and before long, he was hired as an illustrator on the FX show Archer, which then led to storyboard artist positions on Pig Goat Banana Cricket and SpongeBob SquarePants. “I got this bug to be a show creator,” he adds. “The dream is to have your own show, because then you can hire all the people you admire and you put together a team that is better than you!”

Both Trabbic and Johnson hope that their show will bring some much-needed light and humor into everyone’s lives. “Looking back, our show was built through a dark, unprecedented time, during COVID and the whole election year landscape,” says Johnson. “This show kept me out of the real world. John and I laughed so much because we are actually 10 years old in our brains. But we’re not pandering to our audience. It’s a very layered comedy. We’re OK if it gets sad or emotional, too. Because you know what? You can’t lie to kids after these past two years!”

Adds Trabbic, “Our show was spawned during a dark, difficult time, and we didn’t know what the future was going to look like. This show brought us all together and gave us something to look forward to every day. You will see a lot of love on this show. It wasn’t all blood, sweat and tears. It’s also a lot of joy, fun and laughs. We want our viewers to forget about the dark stuff and feel the same joy from our cloud and his friends.”

Middlemost Post premieres on Nickelodeon on Friday, July 9 at 7:30 p.m.