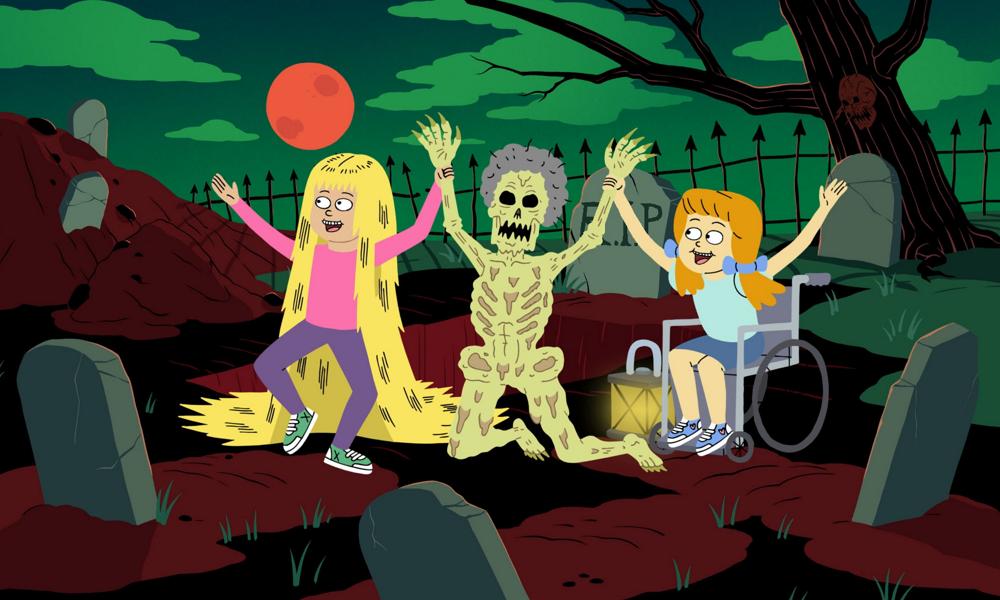 ***An excerpt of this interview, edited for space, originally appeared in the May ’20 issue of Animation Magazine (No. 300)***

JJ Villard has been making wild and idiosyncratic animation since he burst onto the scene with his award-winning shorts Son of Satan (2003) and Chestnut Icelolly (2004). After receiving an Emmy for his 2013 Adult Swim series, King Star King, the L.A.-based toonster is back this year with JJ Villard’s Fairy Tales, a wild and twisted take on classic Brothers Grimm stories like Cinderella and Snow White. We caught up with JJ on a wild Friday morning just as everything was about to shut down in Los Angeles due to coronavirus restrictions. He was happy to give us his unfiltered thoughts on the making of the new show and working in the animation business in general: 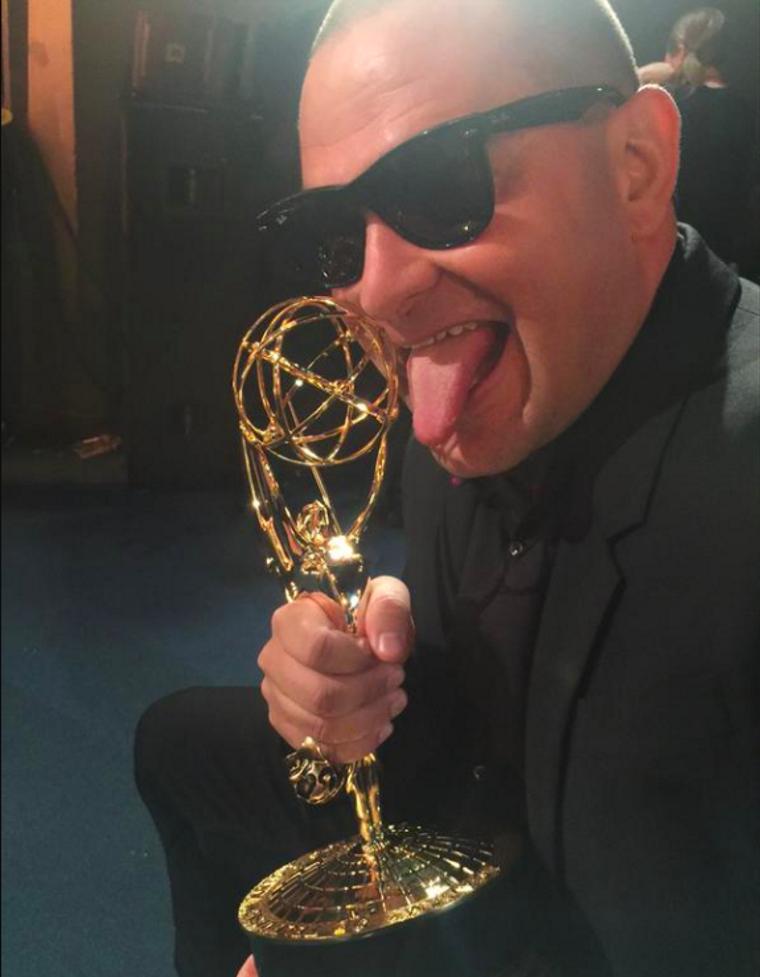 Animag: Allright, Mr. JJ, congrats on getting another wild and surreal show off the ground. Maybe we can start by you telling us about the origins of your Fairy Tales?

JJ Villard: Before we get going, I wanted to say congratulations to drugs during these tough times, because they won the war. I am not a drug taker myself, but nonetheless, a lot of my friends are, and they all helped make this show.

OK! So now, you can tell us about how the show came to be!

I always say, “If you are able to get your foot in the door just a tiny bit, you’ve got to kick that door down in the name of Satan.” And that’s what I did. I got through the door of Adult Swim. Anyway, Mike Lazzo [Adult Swim exec producer] came to the Cartoon Network studio in L.A. from Atlanta to talk about my previous show King Star King for a meeting, and I managed to give him this zine of my sketchbook. Meanwhile, the other executive in the room (who shall remain nameless) said, “Why are you doing this? Mike Lazzo is a busy guy! He doesn’t want to see your stupid sketchbook!”

Little did the other exec know that years later, Mike Lazzo would remember that sketchbook and a specific page where I had drawn Snow White with a rabbit and a Voltron character. He thought that was insane, so he associated me with fairy tales because of that. So years later he came back to me and said, “I want you to do a show about fairy tales, based on that sketchbook page.” Of course, I said, “Fine, I’ll friggin’ do a show on scary fairy tales.” I was in development for less than a year, and I can’t believe how fast it moved. That’s extremely fast for a friggin’ TV show! We started making the show in December of 2018. That’s when I got my first employee, our layout artist Matt Taylor. 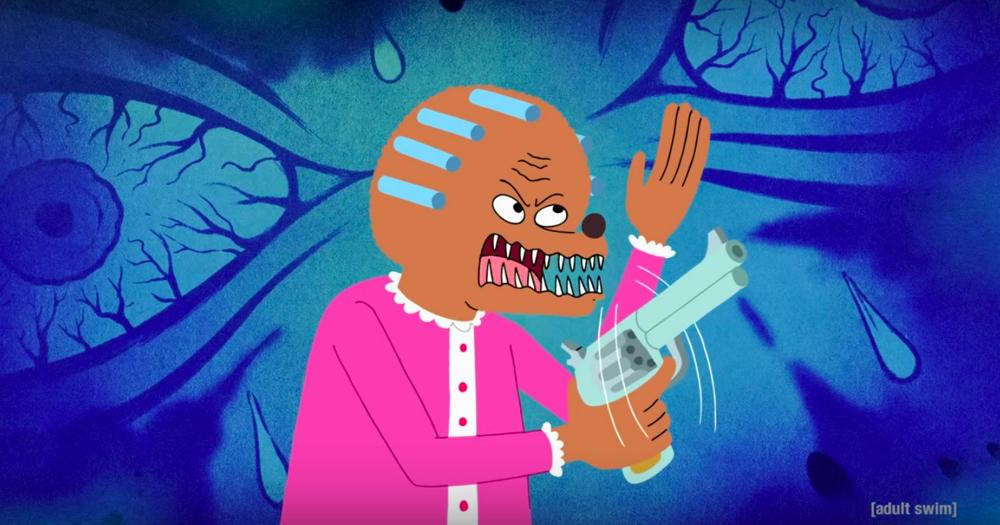 Now, how many people worked on the show and where was the animation done?

I would say about 70 people overall, including the animators at Saerom Animation studios in Korea. They are the same people who do Dora the Explorer [as well as Amphibia, We Bare Bears, Craig of the Creek and many others] — that’s what sold the studio to me.

So, what was it like to be in development for this crazy show?

Before the show started going, I was working freelance on whatever project that came my way. Surviving in California requires two jobs and some fraud on the side. Thank God for social media and Instagram! Luckily I get a lot of random inquiries, and sometimes, when you’re down and out, you just have to take those crappy jobs. I mean I was doing a friggin’ t-shirt line for Kanye West!

“Dude,” I said to myself, “If I make these storyboards so insanely good, maybe I can skip the animation process for the pilot.” That’s what I did. I friggin’ did 2,000 storyboards for an 11-minute show. Shipping takes almost six months, so that would have been another six months of hard living. So, I wanted to cut through that, and I storyboarded the hell out of it so the animators could really understand how the characters move. 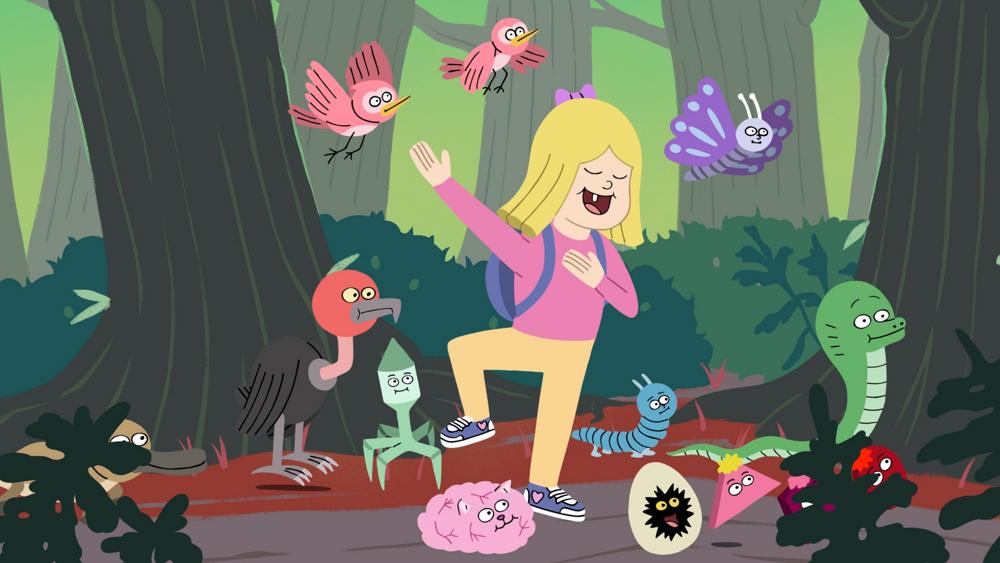 Can you tell us a little bit about the visual look of the show?

The show’s aesthetic was inspired by fairy tales, so I looked at those Little Golden Books. I wanted to come up with something that was timeless. I slipped in a little Mary Blair, I mean her style is so charming and cute — something I would never do, but I said f— it, I’m gonna slip in Mary Blair. People are going to say, “Hey, what happened to the King Star King look?” I am gonna do a children’s storybook look, but the stories are going to be friggin’ weird. The key is going to be simplicity, simplicity, simplicity.

Did you ever get in trouble for being too wild and crazy for Adult Swim?

Of course, there were restrictions at Adult Swim. I got into a lot of trouble for how sexual and perverted King Star King was … but it was funny. In this cartoon, there are no sex jokes. I deserve a pat on my back for that. Sure, there are some gross-out jokes, but that really pushed the writers’ room — which was just me and Johnny Ryan and James Merrill. My writers understand my sense of humor and I understand theirs. We laugh at the same type of shit. Picking the right writer is so important for the show.

The first season of the show is six 15-minute episodes. Are you going to do more?

We have done six 15-minute episodes. Season two is likely coming out. At the same time, We are living in a time of streaming wars, along with the coronavirus, there’s a lot of insanity going on. I have a lot of offers coming my way and a lot of them are appealing. I am also working on another special project at the studio, but I can’t tell you more about it right now. 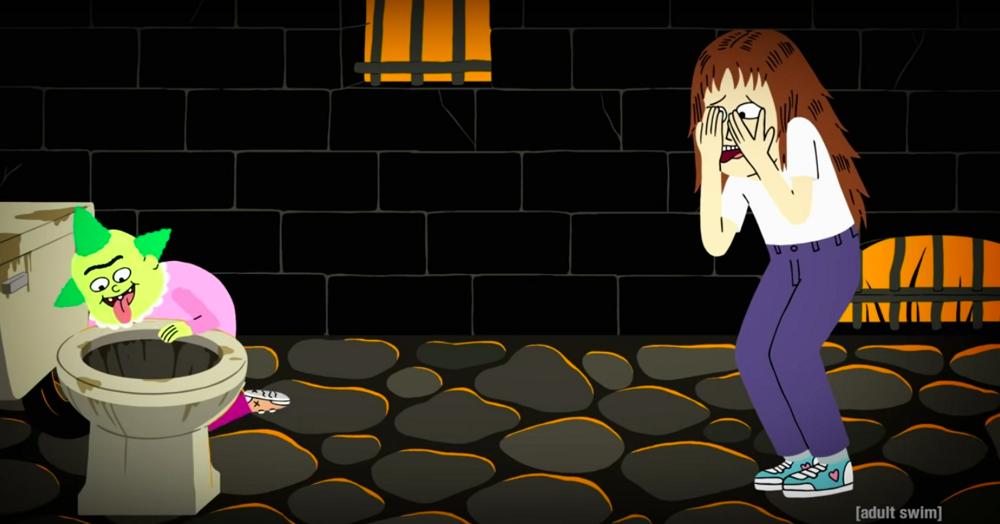 What would you say was the toughest part of getting the show off the ground?

I guess the toughest part, as with many projects, was I am a new creator here at Cartoon Network, and every creator has their own method and way of working, so It’s difficult for people to understand how different creators work. That’s all I can say about that.

I am a workaholic. I get here at 8:30 every day and I don’t leave until 9 or 10. That’s a life of a creator. I need my good night’s sleep to be creative for the next day, and that cycle continues for a year. You have to be very disciplined as a creator. Everything matters when you’re creating. This is a friggin’ train with no brakes and it just keeps going. The train is on fire, too, and there are passengers in the back, so you can’t mess up your due dates … you can’t f— up the schedule … I am proud that I came in under budget. There were no recurring characters in the series, and each episode had its own stories … Cartoon Network loved working with me because I know how important the production side of things is.

It’s all traditionally animated. Pencil and paper, no shit. Saerom is old school. They are so old school, they don’t even remember how old “old school” is. I boarded every episode. I did the character designs for the episode with Matt Taylor. You are pretty much your own animation director and you have to approve all the animation and the art. You have to wear a lot of hats. Because their budgets are a lot lower than the Cartoon Network shows … You pretty much work seven days a week. 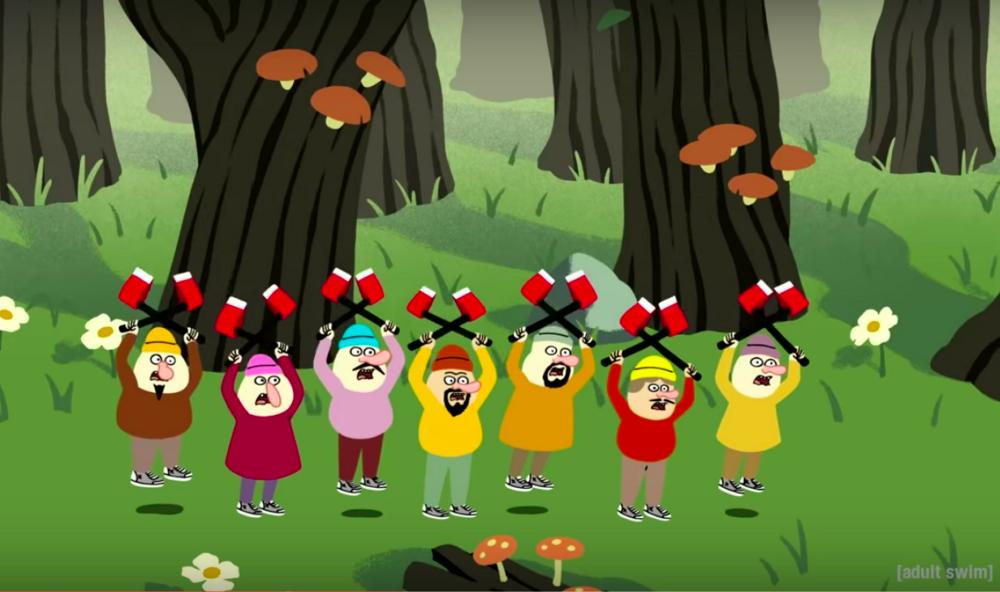 We need to talk about the awesome cast: You have a crazy list of horror movie stars, B-movie legends, a really eclectic mix that includes Linda Blair, Corey Feldman, Jennifer Tilly, Finn Wolfhard Cassandra Peterson, Peter Weller, Warwick Davis, Catherine Hicks, David Patrick Kelly, Sheryl Lee, Alan Oppenheimer… How the heck did you get them all signed up?

Everything you do has to do with your work ethic. I wrote this on my wall: “A dream written down becomes a goal. A goal broken down to steps becomes a plan. And a plan backed by action makes your dream come true.” I have always been about supporting professional cartoon voice actors and wanted to support the animation industry. But that wasn’t getting me work. So, I thought, OK, I am going to work with celebrities that I want to work with — I don’t want to work with friggin’ Christina Aguilera or Billie Eilish or friggin’ Tyler, the Creator. So, I figured out my favorite movie of all time is The Exorcist.

I said, f— it, let’s call up Linda Blair. She said the only way she was going to accept it was to interview the show creator! She said, “If I like the creator I will say yes.” So, she interviewed me! She didn’t let me audition her. She called me up. I was f—ing nervous, dude. She straight up asked, “Why do you want to work with me?” and I said, “Because to me, you are the greatest living female actress.” And I meant that with every fiber in my body. She said, “You brought a tear to my eye.” She was so good that I hired her for two of the episodes. She is so natural. I have never seen anything like her.

Peter Weller said, “Don’t you ever tell me how to read my lines!” I said, “Dude, you’re Robocop. You can do whatever you want.” The whole thing blew my mind. I didn’t have one bad experience. It literally was just me sitting back on my bed, thinking how can I make this fun for me, so I made a list of all the best movies ever made and tried to get all the actors! 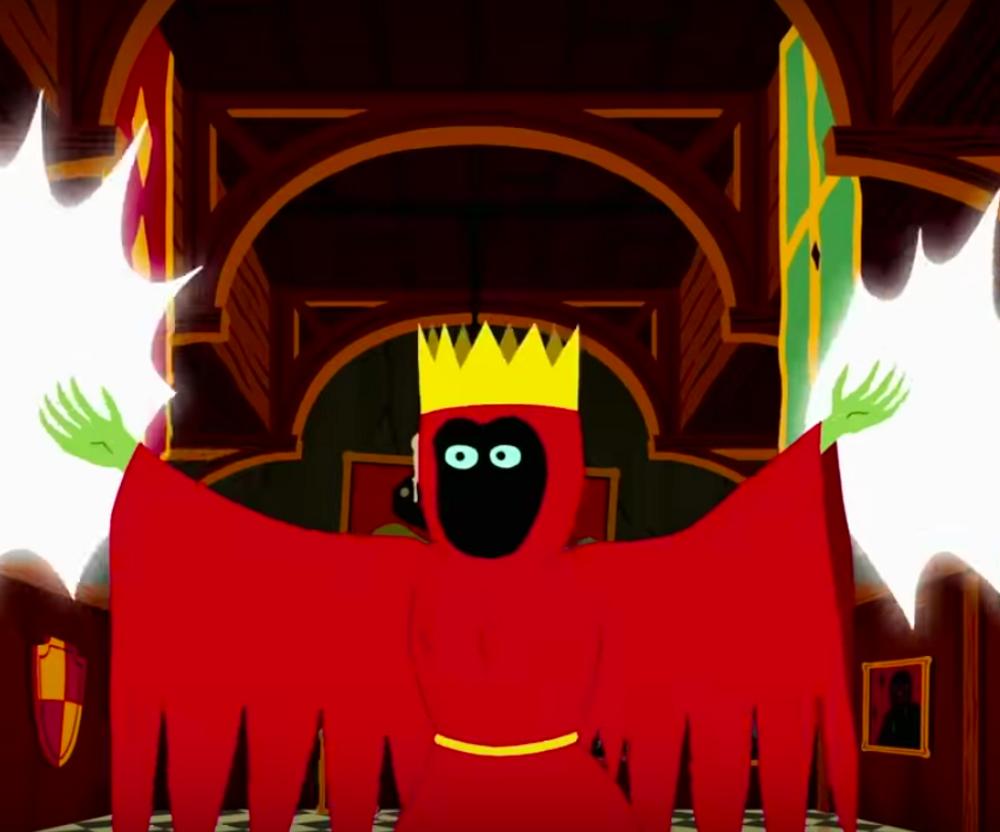 What do you want audiences to take away from your show?

People need to ask themselves, “Who checked in on you today?” If nobody checked in on you, then you have to say, focus on yourself. That’s what it’s all about. Nobody is going to check on you to see if you’re doing good. I had this stupid dream that I can make the fairy tale cartoon in this time of chaos, and I think it worked. It was all of that and a little bit of bitchcraft … not witchcraft; I am a strong believer of bitchcraft!

What is your take on the crazy, busy state of animation today?

My advice is to never reply when you are angry, when all these people are headhunting you. Never make a promise when you’re happy, and never make a decision when you’re sad. If you can take any emails and phone with those three things in mind, you’ll be fine.

The state of animation has never been better. All these streaming services don’t know what they want. They haven’t landed their big hit yet. There is still no South Park or The Simpsons, so they are searching. I am a victim of these streaming wars. I am a little tunnel rat digging my hole, checking out the scene trying to figure out the best path. But in the end, I’m gonna be Cobra Commander, dude, and take over the world, and nothing else! [Laughs] Lastly, there are too many artists out there. It gets filtered out.