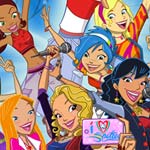 The third season of internationally known Italian sports animation Spike Team, created by world volleyball champion Andrea “Lucky” Lucchetta, has made its national premiere on Rai Gulp as of May 8. Produced by Lucchetta’s Lucky Dreams Production in co-production with Rai Ragazzi and NYC-based AudioWorks Producers Group, the show airs every morning at 7 a.m.

Subtitled “Olympically Spikes,” season 3 (26 x 26’) takes place entirely in Italy. After the team’s return from England, Susan relates the latest events and introduces a new teammate: Francy! Who, off the volleyball court, finds the mythical Temple of Olympian Zeus. The girls will go through many challenges as they prepare for the Olympic and Paralympic games under the wise leadership of coach Lucky. After the opening ceremony at Stadio dei Marmi in Rome all the matches will take place in the most beautiful and famous Italian’s squares such as Piazza San Marco in Venice, Piazza del Plebiscito in Naples and many others, brought to animated life by the Lucky Dreams creative team (Alessandro Belli, Marco Storani and Andrea Fazzini).

This new journey will close with the discovery of the Olympic Torch, woven into stories of courage, power, disability, teamwork, and the power of sports to unite people and inspire them to overcome all challenges.

The new season will also feature animated cameos by Italian Paralympic Gold Medalist, Bebe Vio, and pop duo High Diamond, whose songs will play in various episodes and whose LP will debut this week through Universal Music.