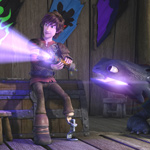 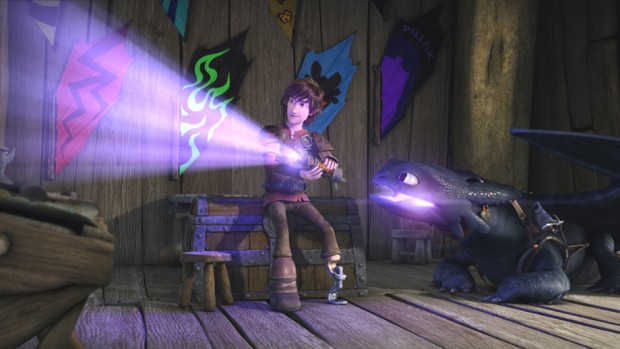 DreamWorks Animation has hardly sat still with what is arguably its most successful franchise to date, upping the storytelling ante yet again with a new series titled Dragons: Race to the Edge, which premiered its first 13 episodes June 26 on Netflix.

This is the third series based on the hit How to Train Your Dragon movie franchise, but the first to be part of DreamWorks Animation Television’s overall content deal with Netflix. The first two series — Dragons: Riders of Berk and Dragons: Defenders of Berk — each ran 20 episodes and aired on Cartoon Network.

Much of the same creative team is in place for the new series, most notably showrunners and executive producers Art Brown and Douglas Sloan. The duo says Race to the Edge is a very different series, picking up some of the characters from the previous series but finding a new premise in the form of the Dragon Eye: a special codex-like device with lenses that reveals information about new islands and — most importantly — new dragons.

That information leads Hiccup and his dragon-riding pals — Astrid, Fishlegs, Snotlout and the twins Tuffnut and Ruffnut — on a quest to explore the areas around Berk, and it’s part of a storyline that will eventually meet up with the start of the feature film How to Train Your Dragon 2, which was released in 2014.

Sloan and Brown say the fun in doing a series based on a feature is it offers a chance to explore the characters in much more depth. “We get to really dive in to all this stuff you don’t get to do in a 90-minute movie,” says Brown.

That gives the characters a destination to reach, but leaves the path they take wide open for all kinds of stories.

“Hiccup is still trying to figure out what it is he wants to do and what that is, is he wants to explore, he wants to push the boundaries,” says Brown. “When the second movie picks up, he’s already at that place, he’s already exploring, he’s got this huge map and he’s been all over the place. But we are able to tell the genesis of that desire and we also are able to tell you things like how Stoick got his dragon, how Gobber got his dragon and Hiccup’s flight suit, we’re going to show you how that came to be.”

The show follows an idea from Netflix best described as “propulsive serialization.” That means the show does have an overall storyline and continuity — but also has the freedom to do stand-alone, self-contained episodes that Brown says are usually about finding new species of dragons.

“With binge watching, the best shows that do it — I have found — don’t dwell on one story for episode after episode,” says Sloan. “They wrap stories up quickly and move on to other ones. … I think that’s what we try to do as well, is bring in new villains, bring in new characters, bring in new dragons and switch it up as much as we can.”

Inspired by the codes in The Da Vinci Code, the Dragon Eye is the key for the series. When a dragon shines his dragon fire through the Eye’s lenses, it projects unique data key to the riders’ quests.

The series gets a serious upgrade in the visual department from the previous series and takes advantage of technologies that were simply unavailable to a series production before. Among the new tricks the series learned was creating better crowds of different types of dragons, improved water interaction, visual effects and particle-based effects for things like sand and snow.

The main animation obstacle for the series remains the time and expense required to animate multiple characters in a single shot, something that’s hard to avoid when your main cast consists of five riders and five dragons — one of which has two heads.

“If you have them all in one shot, that gets expensive to animate and to render,” says Brown. “We try to keep those shots to a minimum.”

Releasing 13 episodes at a time definitely changes the storytelling approach of the show, Brown says, allowing more serialization and less re-capping or exposition.

“Kids remember everything and they know the shows better than we do,” says Brown. “ So we would always fight for (the idea that) we don’t have to re-explain something in a show.”

Elaine Bogan, who directed the two-part premiere episode, says there is a definite difference producing the show for Netflix. “There was a lot of exploration we were able to do and I feel because, now we’re with Netflix, the limitations on the show have expanded a little bit and we’re able to play a little more with very broad story arcs that will last throughout an entire season,” says Bogan.

Production on the series still follows a tight schedule not too different from a TV series. Work on the series has been continuous since the next batch of episodes will need to be ready to go when Netflix decides it’s time to release them.

Bogan, a director on the show who oversaw the two-part premiere, says she handles seven to nine episodes in different stages of production at any given time. Making sure those episodes progress smoothly, and that they are consistent with other directors’ episodes, is a constant challenge.

“We’re fortunately all very willing to collaborate, and so it might mean one or two meetings a month where we all sit down and talk about what we’re up to,” she says. “I like showing other directors my works in progress, my animatics, just to keep them up to date on what’s happening throughout the series. And I think it’s important for a ncie consistent feel throughout the season.”

The showrunners say the relationship with Netflix has been satisfying and helped make Race to the Edge as good as it can be.

“You can tell by the quality (of original shows) on Netflix that they really do allow their producers and their writers to achieve their visions,” says Sloan. “We definitely have a vision for this show that we wanted to achieve and they let us go for it. They trusted us and I think it came out exactly how we wanted it to come out.”

“It’s interesting because when they give you that trust, when someone instills trust in you, it makes you more trustworthy,” says Brown. “You feel a higher responsibility to make a great program for them. So it works both ways.” u

Bear Necessities
Head of the Pack