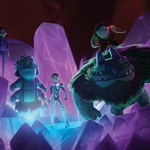 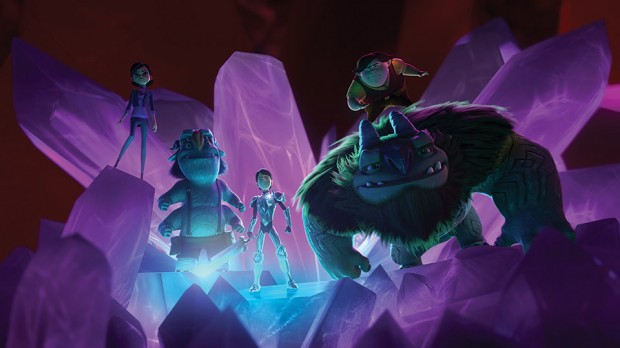 One of the reasons Guillermo del Toro is one of this generation’s brightest filmmakers is that every project he tackles has plenty of ambition, and DreamWorks Trollhunters, the new animated series he created and is executive producer on, is no exception.

Originally developed as a feature film, Trollhunters debuts Dec. 23 as a series with 26 episodes going live on Netflix, a format that proved a perfect match for the material, says executive producer Christina Steinberg. “Guillermo had said to us, if I do this, if we make this commitment to TV, this is going to be Game of Thrones for children or House of Cards for children, and it will redefine that genre,” she says.

On the surface, the premise of Trollhunters looks simple. The series follows the adventures of young Jim Lake Jr. (voiced by the late Anton Yelchin), an ordinary kid who explores the neighborhood of his hometown Arcadia via bicycle with his best friend Toby. When he discovers a strange amulet, Jim is bestowed with the power of the Trollhunter, who protects both humans and a community of trolls who live under the bridges of Arcadia from trolls and other threats that threaten them. There are trolls who help Jim — Blinky (Kelsey Grammer) and AAARRRGGHH!!! (Fred Tatasciore) — and plenty of creatures who don’t, mainly Bular (Ron Perlman), a troll angry at having been passed over as Trollhunter and therefore becomes Jim’s nemesis.

Executive producer Rodrigo Blaas says del Toro has given the show a deep mythology full of monsters that also is kid-friendly in the mold of the popular 1980s films from Amblin Entertainment, such as E.T.: The Extraterrestrial, Back to the Future and, of course, The Goonies.

But there’s a lot more to the story than meets the eye, much of it owing to the show’s long journey to the streaming screen. Del Toro conceived the project as an animated film he would direct and brought aboard collaborators such as Blaas, whose animated short Alma caught his eye; Steinberg, who worked with del Toro as producer on the 2012 feature Rise of the Guardians; DC Comics superstar showrunner Marc Guggenheim (Arrow, Legends of Tomorrow, the Green Lantern movie), originally slated to script the movie and now also an executive producer; and writer and co-executive producer Dan Hageman of The LEGO Movie fame. The movie went through several iterations — del Toro wrote a novel version with Daniel Kraus that’s due out in conjunction with the series’ debut — before landing at DreamWorks Animation Television as a series under the company’s overall deal with Netflix.

“With the movie, when you know Guillermo’s stories, they have this mythology and this really deep well of knowledge and references that he’s using,” says Blaas. More than any other DreamWorks series to date, Trollhunters pushes the envelope on serialization; there are no Scooby-Doo-like “bottle episodes” you can watch out of order and have everything still make sense. That helped put focus on character and their arcs throughout the series. “We really wanted to show a long story that felt like a really long, serialized movie almost,” he says.

While a series allows episodes that focus on secondary characters, such as Jim’s friends Toby (Charlie Saxton) or Claire (Lexi Medrano), the overall story is firmly focused on Jim. “It’s really Jim’s story and we are sort of watching a young boy grow from a boy into an adult and having to take on responsibility,” says Steinberg. “But also I think — we’re all parents — it’s about being able to let go of your child and accept that they’re growing up and accept that they’re going to get into danger and you can’t control them.”

Blaas says while they more than enough stories to take the show way beyond the initial batch of 26 episodes, they decided to hold back nothing. “We were thinking, if we’re going to go make 26, we’re going to take all the great ideas we’ve had from our movie scripts and put them into the story we’re going to tell,” he says.

That said, Steinberg says they do have an ending planned for the series. “It was really wonderful to have that,” she says. “We knew where we needed to go with the character, what their fates were going to be, where all the other characters were going to end up, so it was really helpful to work toward that and to craft the 26 episodes toward that.”

Having been developed as a feature, del Toro and his team strived for a look that is more cinematic and deeper than typically found on an animated series. With creatures such as gnomes and changelings coming into the picture, and a darker race of trolls banished to another dimension that travel via special tunnels, and the everytown look of Arcadia, the series has a very wide scope.

“One of the fun things for me was finding out what the troll worlds look like and what the trolls are made of,” says Blaas. “Going back to what the mythology of trolls are, we use a lot of that — when they are hit by sunlight, they turn into stone statues, etc.”

The trolls also had to look different from other versions of trolls (including those appearing in a recent feature film also under the DreamWorks banner). Blaas says the look crystalized for him during a visit with his young daughter to the Natural History Museum in Los Angeles, which included dinosaur fossils, dioramas of ancient animals and exhibits focused on geology. The latter particularly enamored his daughter, who chose a box of various types of rock as her one treat from the gift shop.

“This is something visceral to us as human beings,” he says. “We are connected to the ground and we really connected to these minerals and gems. And that was what triggered this idea of, because these trolls live in caves, they are rock experts; they harvest and they use these rocks in ways that we don’t even know.”

Maintaining feature quality in the animation was another challenge, made easier by the specificity that del Toro was able to bring to every aspect of his vision from color to composition.

With five studios doing the animation, preparation was key, says Blaas. Animatics were held to a high standard of storytelling, while a color script and feature-style cinematic lighting was used to give the show a uniform look.

On the animation front, Blaas says it was a big help to develop rigs that were detailed enough to deliver high-quality character and facial animation worthy of the work turned in by the big-name voice cast. “These are amazing performances that these actors have given you and you want to make these shots something that you really want to animate,” says Blaas.

An element del Toro impressed early on for the animation was “finding the mistakes,” says Blaas. That means finding the moments where, say, a character closes the microwave door and it doesn’t quite shut, or a can tossed toward the trash bin just misses. “They tell you a lot about a character, that lack of perfection,” says Steinberg.

In addition to serving as executive producer, del Toro directed the first two episodes of the season with Blaas and remains heavily involved in the production, Steinberg says. “It really helped to set the tone and to really establish so many aspects of the show that we can then follow through,” she says.

With a second set of 26 episodes in the works and plenty of creative freedom and support from Netflix, producers expect viewers will be as drawn to del Toro’s continuing vision as they have been.

“It’s definitely a passion project for him,” she says. “We’ve always had his glorious, wonderful vision shining above us, that we have to all look up to, and we feel that pressure daily.”

A Head Trip for the Heart
Completing the Circle