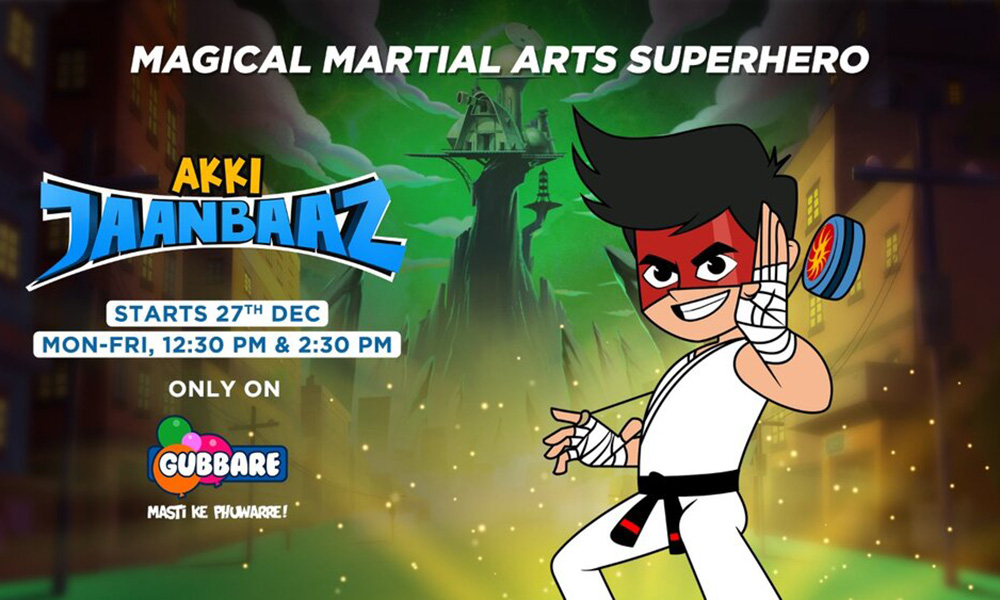 The IN10 Media Network’s Gubbare, is ready to take on the competition in children’s entertainment with its original content debut. After immense research and understanding of the viewer’s television consumption behaviour, the kids’ channel will bring the magical martial arts superhero Akki Jaanbaaz to screens on December 27.

Aiming to create a role model for young viewers with a unique storyline, the show will feature classic martial arts moves and playful characters that resonate with kids across the country. The series centers on nine-year-old Akki as he juggles his normal life and his superhero persona, powered by a magical belt. Akki Jaanbaaz is produced by local animation powerhouse Toonz Media Group. ( Teaser )

“Since its launch in 2020, Gubbare has kept kids at the core – be it the characters or stories/ The launch of the IPs is a significant milestone for us as we move towards garnering a larger share of the viewership pie,” said  said Brian D’Costa, AVP – Content & Strategy for the channel. “With local, relevant, and entertaining narratives, we will further strengthen our original programming in multiple languages as we want to connect with kids across regions. Kids today want differentiated content and our new line-up will fulfill that need-gap in the genre.”

To engage with the audience, the channel will launch a high-intensity marketing plan for Akki Jaanbaaz, including Instagram filters, AR/VR characterization and a dance challenge, offering kids the chance to win interesting merchandise.

In the pipeline are two more original titles” Roro aur Hero – Bhoot mast! Zabardast and Akul aur Nakul – The Asuras. Both the shows, catering to different genres, explore the themes of friendship, family and good vs. evil but marry them with comedy with the help of the lovable characters.

Catering to the young audience, the channel aims to be a one-stop entertainment destination for kids in the country. Staying true to the channel’s tagline – “Masti Ke Phuwarre” (Fountains of Fun) – the new IPs will celebrate magic, action and high-quality animation and extend Gubbare’s library to build affinity with its loyal audience. The efforts are also being made to keep the content relevant globally.

Akki Jaanbaaz will premiere at 12:30 p.m. and 2:30 p.m. on December 27 in Hindi, English, Tamil and Telugu. The new and upcoming shows will also be available on the network’s OTT platform EPIC ON.