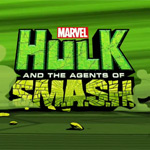 Expect lots of larger-than-life dilemmas, plenty of action and dysfunctional family jokes in Marvel’s new series Hulk and the Agents of S.M.A.S.H., premiering this month on Disney XD.

Those of us who thought the Incredible Hulk was the best thing about The Avengers movie will definitely get a kick out of the new animated series coming to Disney XD in August. Hulk and the Agents of S.M.A.S.H. multiplies the angry superhero’s appeal by five, serving up a world where Hulk, his cousin She-Hulk, A-Bomb, Red Hulk and Skaar all learn to live together under one roof. Oh, and they save our planet from a few unpleasant accidents and evildoers while they sort out their crazy dysfunctional family issues!

When the show’s prolific exec producer and head of Marvel’s TV division Jeph Loeb came on board three years ago, his team was looking for popular Marvel franchises that would work well in animation.

“I’m a huge Hulk fan myself,” says the Eisner-winning comic-book writer and award-winning TV writer/producer (Heroes, Lost). “We realized that before The Avengers movie, Hulk never had the chance to be perceived as a superhero. He was looked at as a monster, which was one of the great Marvel conflicts. The popularity of Joss Whedon’s movie gave us the perfect opportunity to feature Hulk as a hero in his own animated series.” 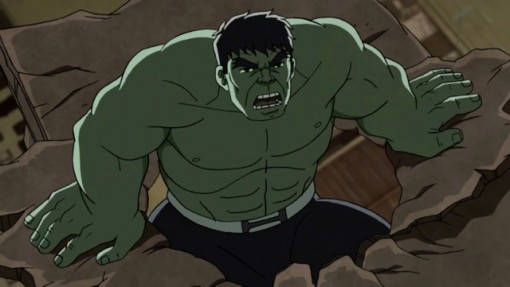 Loeb, who is also exec producing this fall’s ABC live-action series Agents of S.H.I.E.L.D. and 2014’s The Punisher, says then the creative team decided to go back to the vaults and take advantage of decades’ worth of Marvel material.

“We thought, it might sound crazy, but we’re Marvel! We’re crazy,” he says. “The idea was, what would be more fun than one Hulk? What about five Hulks? We knew that these characters existed in the Marvel publishing universe, so we invited characters that had never been animated before.”

One of the main goals of the new show was to put new aspects of the Hulk “family” under the microscope, while dealing with issues like another planet being on a collision course with Earth. 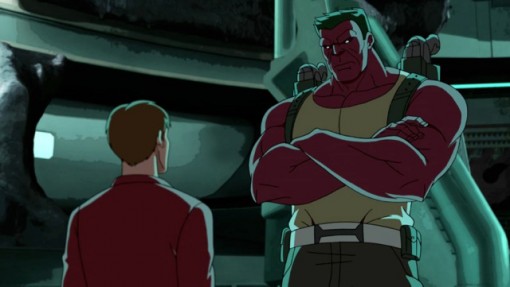 “This wasn’t just going to be about the usual outside forces threatening the lone superhero,” says Loeb. “Just like the old Bill Bixby show [1978-1982], which is some people’s favorite Hulk series, we wanted this project to be about family and our heroes’ journey to be accepted as a person as they help other people. Each episode has a big giant conflict or a problem, but it also deals with the personal problems of this Hulk family—what we like to refer to as four brothers and a sister.”

“Hulk was a natural choice because he was one of the breakout characters after The Avengers, and it allows us to go bigger and more over the top,” says Dini. “In a strange way, it also allows us to explore the humorous aspects of this family of misfits who are thrown together.” 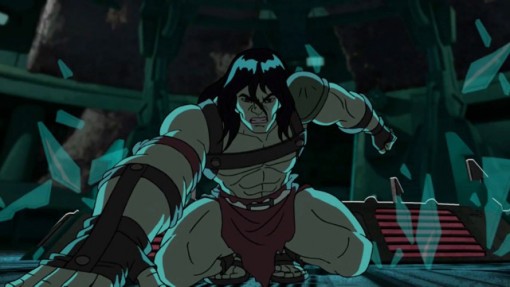 Dini and Loeb point out that action plays a big part since the emotion comes out of the Hulks’ different personalities. The Green Hulk’s aim is to show the world that the Hulks can be heroes, but he has to keep his own temper in check. Red Hulk is a gung-ho, ex-military archetypical American army man, the type who blasts first and asks questions later, while She-Hulk fights for a place for herself in a world of men. A-Bomb was a former sidekick who accidentally gets “Hulked,” while Skaar is from another world, with a mysterious backstory. Viewers will have to keep a close eye on him, as he may or may not be a double agent.

“They are definitely larger than life,” says Dini. “They’re going to punch each other, snark together and The Green Hulk will have to knock their heads together to get them to cooperate and face the common enemy. I have a couple of brothers, and they remind me of the things you do as a kid with your brothers, get into fights, knock your heads around, etc.”

To create the appropriate look for this rambunctious gang, Marvel relied on veteran designer Eric Radomski, who is well known for his instantly recognizable work on toons such as Batman, Xiaolin Showdown and Ultimate Spider-Man. 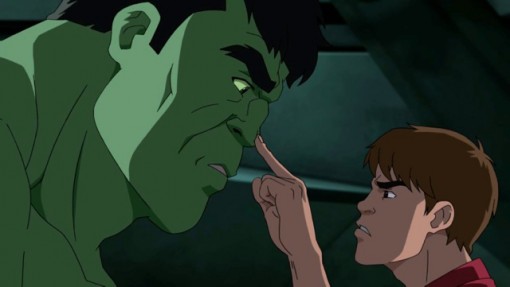 “We wanted to have a show that bursts right through your TV screen,” says Loeb. “When you think of artists like Jack Kirby or Ed McGuinness, their work really explodes off the page. They can’t be contained within the panels of the storyboard. Eric brought the same visual language to the show. We wanted to feel as if the camera wasn’t able to hold everything—you only get part of the Hulk because he’s so huge. There are even times when we make it seem like the action is shattering the camera, right through the TV sets at home!”

Radomski and his team of artists strove to deliver striking visuals depicting giants in their everyday world. “We play up their out-of-place feeling in the human world,” explains Dini.

“They can only relax in their own world since they are giants in the ordinary world. When they go to the small towns, we show them from people’s perspectives. We also had a lot of fun coming up with the way the folks who live in Vista Verde, the small town that was close to the Gamma Ray experiments that transformed Bruce, treat The Hulk as a beloved mascot. You see his image on souvenirs and stands. The Green Hulk is treated better here than anywhere else. He occasionally gets mad and wrecks the town, but they give a lot of leeway. We show him towering over the regular citizens here. Even when we have the big vistas of the Southwest, a regular person would barely register, but the Hulks loom over everything else as huge presence.” 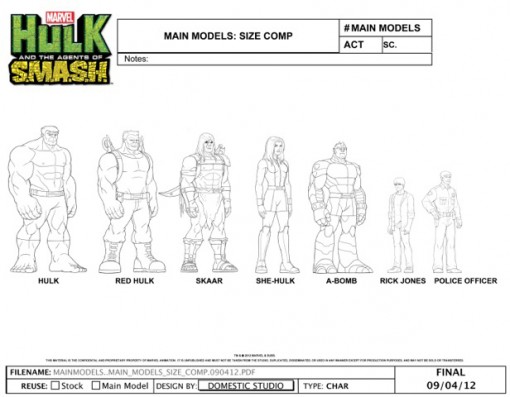 Of course, when you have such magnificent larger-than-life heroes, you need remarkable villains to be worthy of their attention—enemies with great names such as Dr. Doom, Colossus, Galactus, Abomination and Zzzax.

“You can’t have rank and file bad guys in the Hulk universe,” notes Dini. “They have to be giant freaks and anomalies that could be considered a challenge by the Hulks. These aren’t your regular robbers and thieves.”

However, no matter how unbeatable the nemesis or impossible the threat seems to be in each episode, the heart of the matter is the universal relatability of the main characters. 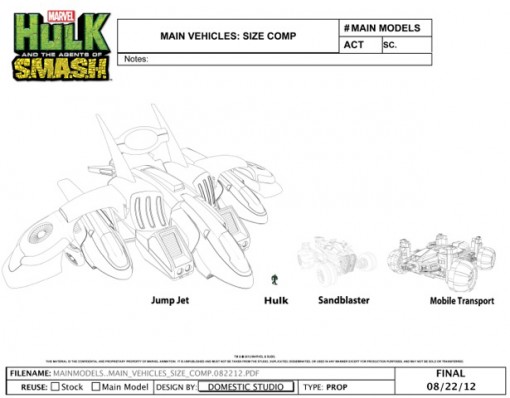 “Our Hulk heroes are still very sympathetic,” concludes Loeb. “The final message of the show is that no matter how big you are, you still have the small problems everybody else has to deal with. Especially when kids watch the show, they are going to relate to these characters because they have to deal with issues in their own lives. As we like to say all the time at the studio, ‘It’s all Marvel!’ It’s all about epic adventures and the human spirit.”

In other words, things that puny humans really enjoy! 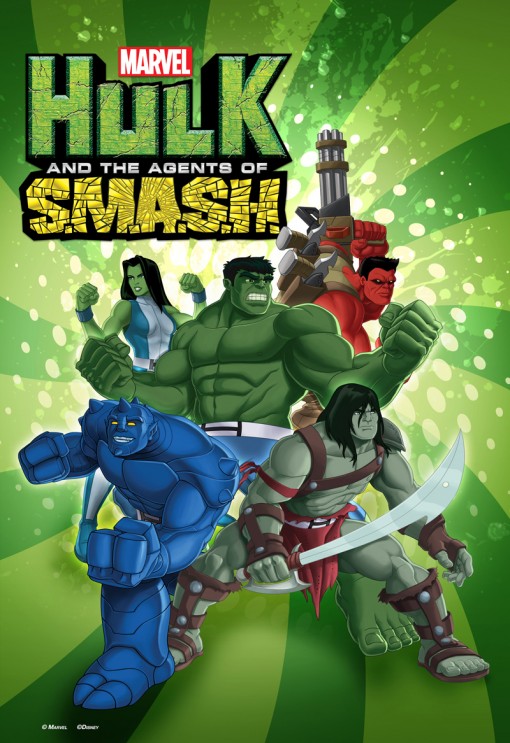