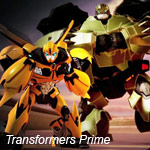 Transformers fans better mark their calendars: Feb. 18 will see the debut on The Hub of the second season of Transformers Prime and the series debut of the all-new Transformers Rescue Bots.

Transformers Rescue Bots will premiere with two back-to-back episodes at 11:30 a.m. and noon ET. The season premiere of Tranformers Prime is set for 8:30 p.m. ET and will be followed by the network debut of 1986’s Transformers: The Animated Movie at 9 p.m. ET.

The second season of the Transformers Prime digs deeper into the mythology as both the Autobots and Decepticons uncover clues relating to secret artifacts of Iacon, Cybertron’s capital city.

Transformers: The Animated Movie was released theatrically in 1986 and depicts the epic battle between the Autobots, Decepticons and a mysterious new villain Unicron for peace on Cybertron. It features the voices of Peter Cullen, Frank Welker, Leonard Nimoy, Eric Idle and, in his final film role, Orson Welles.