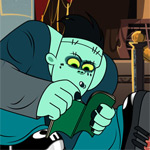 It’s official: Hotel Transylvania: The Series has set its Disney Channel premiere for Sunday, June 25 at 8 p.m.ET/PT. The 26 x 22 min. series is based on the blockbuster film franchise from Sony Pictures Animation, ad is produced in Toronto by Corus Entertainment’s Nelvana studio.

The series centers on Dracula’s teenage daughter, Mavis, and her three closest friends: Hank N Stein, Pedro and Wendy Blob. With Dracula away on “Official Vampire Business,” Mavis finally sees her chance to show her father what she can do. With the help of her friends, she decides to put her brilliant ideas of how to run the Hotel into motion, but Aunt Lydia, Dracula’s older and much meaner sister, will have none of it. While Mavis and friends are ready to let loose and have fun, Aunt Lydia pushes for even more order and tradition at the Hotel.

New episodes will debut every night at 8 p.m. from the premiere til June 29, with Hotel Transylvania checking in to its regular timeslot beginning Sunday, July 9 at 8:30 p.m. The first episode will launch on the Disney Channel app, YouTube and VOD outlets on Tuesday, June 20. Ahead of the series premiere, three new animated shorts following Mavis as daddy Drac prepares to join the prestigious Vampire Council will air starting June 4, and will be available on the app and YouTube channel.

“We are thrilled to be teaming up with Disney Channel to share the visual and epic storytelling of Hotel Transylvania: The Series with audiences worldwide,” said Scott Dyer, President, Nelvana. “Working with our partners at Sony Pictures Animation, we are excited to build on the incredible global success of the franchise and bring the world of Hotel Transylvania to the small screen and family-friendly digital platforms.”

SPA’s Hotel Transylvania first took a bite out of the box office in 2012 in a feature outing directed by Samurai Jack creator Genndy Tartakovsky — it made $358.4 million worldwide after setting a September opening record in the US, and was nominated for a Golden Globe, two VES awards and seven Annie Awards. A sequel, also directed by Tartakovsky, debuted in 2015, breaking the September opening record and marking SPA’s biggest opening. The third feature is due out July 13, 2018.

“We are so excited to expand the Hotel Transylvania franchise into television,” said Rick Mischel, Executive Producer at Sony Pictures Animation. “We look forward to bringing the prequel to audiences worldwide and to sharing the hilarious adventures of a younger Mavis and her monster pals. As we look to the upcoming launch of the original short Puppy! in theaters this summer and Hotel Transylvania 3 in 2018, the television series will keep the franchise fresh and the characters will become a part of families’ everyday lives.”

Hotel Transylvania: The Series is distributed in the US by Sony Pictures Television, while Nelvana Enterprises handles distribution outside the country. 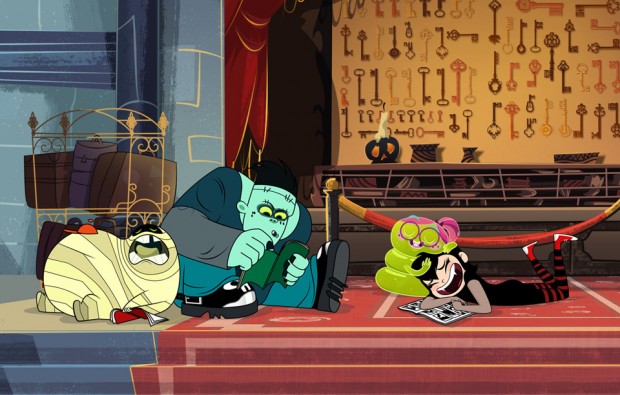