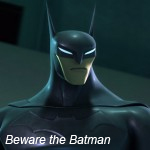 Glen Murakami and Mitch Watson chat with us about Beware the Batman, their highly anticipated animated series on Cartoon Network.

While Superman’s new incarnation is packing theaters this summer, his fellow crime-fighting pal from the DC universe is getting ready to entertain fans on the small screen. Beware the Batman, which premieres this month on Cartoon Network’s DC Nation block, promises to deliver eye-popping CG-animation, brilliant new designs and a colorful roster of criminals that includes Anarky, Magpie, Ra’s al Ghul, Tobias Whale, Professor Pyg, Mr. Toad, and yes, even, Humpty Dumpty!

As series writer and producer Mitch Watson tells us, plans for this new take on the Caped Crusader began about three years ago.

“While the last TV animated iteration of Batman had been great, we set out to go back to the character’s roots,” says Watson, whose many animated TV credits include Scooby-Doo! Mystery Incoprorated, Ben 10: Race Against Time and Mucha Lucha! “The project went through several different versions, some were very dark. But we really got the right tone when [producer] Glen Murakami came on board. He brought the notion that it would be a great idea to go back to some of the classic villains that had never been used in animation before. We’d use some of the older ones and mix them with newer ones that never got their day in the sun.” 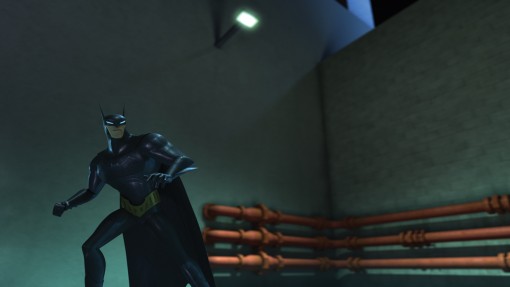 Picking the right villains put the producers on the right track to set just the right tone say producer Murakami, who has been behind some of the most acclaimed and important superhero projects of the past 15 years, including Batman Beyond, The Batman, Superman, Justice League and Teen Titans.

“We felt like we were really taking this familiar character in a new direction because we were not relying on the same core group of villains that have been seen in recent adaptations.”

Another winning aspect of the show is its spectacular use of CG technology, which has rarely been explored as much on a weekly TV show. 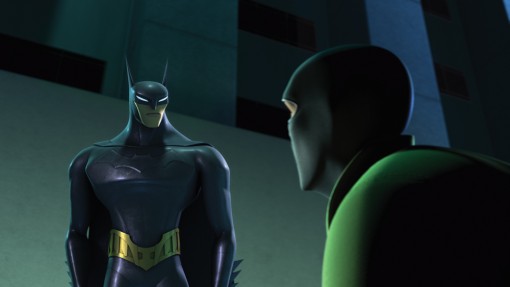 “I know this is a word that everyone uses these days, but the CG really made the show feel more cinematic,” notes Murakami. “We didn’t want to have a photorealistic CG look, and were aiming for a more stylized approach. However, there’s a danger when it becomes too stylized that you lose the reality of your world. With Batman, you want everything to have real consequences. When someone falls off a building, you need to make sure they are in real danger of getting hurt. Since our show is a detective or procedural show, it’s important to have that certain level of realism in your animation.”

Watson points out that the origins of the character goes back to Bob Kane and Bill Finger’s May 1939 issue of Detective Comics.

“He was dressing up as a bat, but the core of the character was a detective,” he says. “He was following clues and solving mysteries, it wasn’t all about gadgets and cars.” 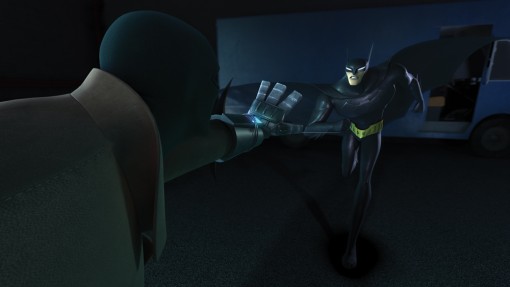 Also playing an important role in this new offering is Batman’s faithful butler Alfred Pennyworth, who is perhaps immortalized by Michael Caine’s portrayal in the Chris Nolan movies.

“We were fortunate to have DC allow us freedom to explore all the characters within the Batman universe, so we went back to the comics and did some research on Alfred’s past,” Watson explains. “He was actually a former MI6 agent and was more of a badass than we realized. We kind of based him on that Sean Connery character [Jim Malone] in Brian De Palma’s The Untouchables movie.”

As the producers point out, one of the most appealing aspects of the Batman universe is the collection of oddball villains, psychotic freaks and misfits that come out of the woodworks to challenge him week after week. Watson says Professor Pyg and Mr. Toad provide the series with two of its more fascinating characters. 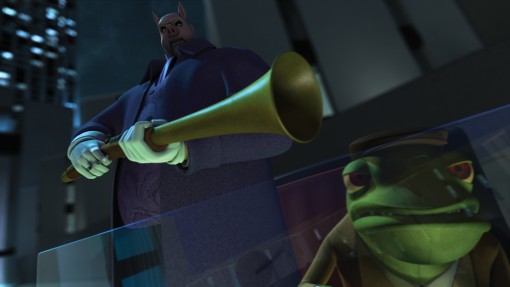 “We found these awesome villains in the comic books, but we had to tone them down because we are targeting a younger audience with our show,” he explains. “They play off of each other very well, they wear Victorian clothing and drive around steampunk cars and have a comedic edge even when they’re doing horrible things. You can definitely see echoes of The Wind in the Willows in this duo.”

Magpie is another one of the show’s interesting new players. In the comics, this one-time Poison Ivy girlfriend was the first villain who was defeated by Superman and Batman working together. The creators of the new show have developed some new details for her.

“She is a mirror image for what Batman could become,” says Watson. “We use her as an interesting foil for the hero.” 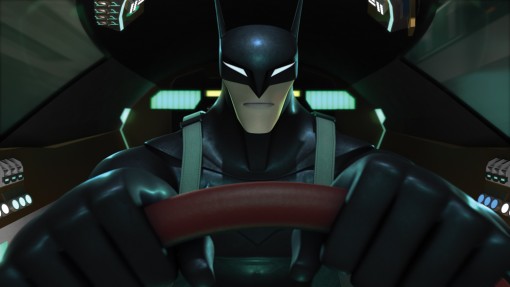 Then, of course, there’s Anarky, a Batman antagonist created by Alan Grant and Norm Breyfogle, who was featured heavily in the comics during the 1990s.

“We really enjoyed playing with this character, who is very intelligent and a real threat to Batman,” says Watson. “Glen was thinking about creating a chessboard motif, and Anarky would be all in white versus Batman’s black outfit. You can think of her as Batman’s Moriarty, because you are never sure where and how she’s going to appear. Her plans almost always come in a disguised form.”

For Murakami, who has created some of the most memorable visual worlds in modern superhero animation, planning a new version of Batman’s universe had its own set of challenges. 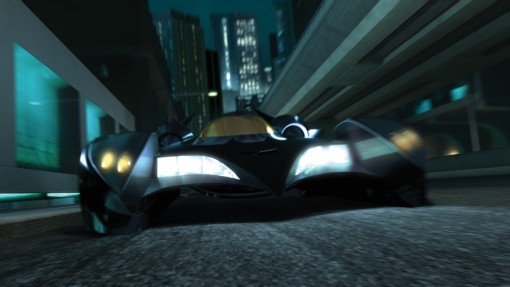 “We wanted to skew a little more contemporary with this show,” he says. “Gothic style would be too complicated in CG, and Art Deco style had already been used for Batman shows. We ended up going with a more modern feeling Gotham City. We wanted the viewer to be concerned and to increase the level of believability and relatability to our characters.”

According to Watson, it took over five months for the CG animation team (which is divided between Burbank’s Warner Bros. Animation studio and the Xentrix Studios in Bangalore, India) to build their version of Gotham for the show. (www.xentrixstudios.com)

“They had to build freeways and roads and a subway system and piping for this city,” he notes. “I have worked on CG shows before, but I hadn’t seen anything like this before. The process is much more involved and costly than 2D. When you work on a 2D show and the sequence is set in a supermarket you just draw the storyboard. For a CG show, you have to build the whole supermarket. Maybe you can use it as a warehouse in another episode, so you got to have the foresight to know how you’re going to use in in the future.” 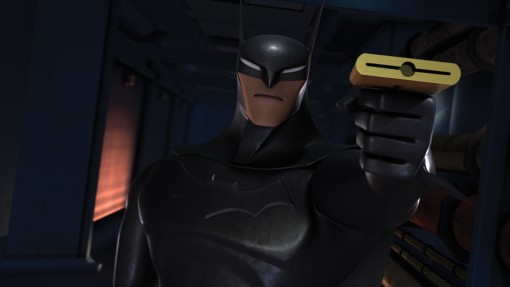 Murakami says it’s surprising to discover how things that seemed quite straightforward in 2D animation become challenging and literal in a CG pipeline.

“I knew that I didn’t want to work on a bland, ordinary CG-animated show,” says the producer. “Because the features have raised the bar over the past few years, fans are a little jaded by some of it and their expectations are set very high. So we had to step up our game as well. I think our show is bigger than what people expect to see on TV.”

Both Murakami and Watson says viewers may never know how difficult it has been to depict Batman’s black suit and cape and the darker hue of this universe in CG. 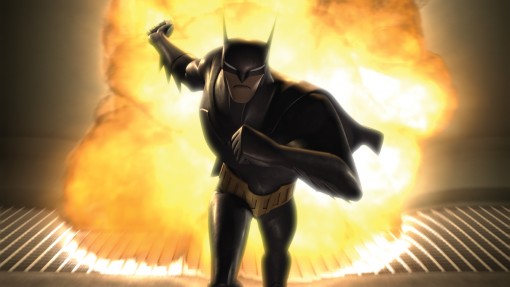 “The cape was really tough,” Murakami admits. “Cloth is still quite difficult to do in CG, especially on TV budgets and time limitations. Batman also runs around a lot at night. It’s even hard in live action to have a character in a black suit against a black background. We learned that the hard way. But it’s Batman, and it has to feel like Batman—it can’t look like a guy in a brightly lit room. It’s all about the mood, the tone and the mystery.”

In the end, the creative team wanted to deliver a show that appealed to both die-hard DC Comics fans and a new generation of TV viewers.

“The thing about the show is that it’s an adventure show that I can watch with my little girl at home,” says Watson. “Some of these shows, they are not geared towards family viewing. Even as adults, you watch them and you want to throw yourself off a bridge. On our show, we have no overt violence—yes, you have the usual Batman tropes of cars, gadgets, villains and explosions, but it’s going to appeal to both kids and adults.” 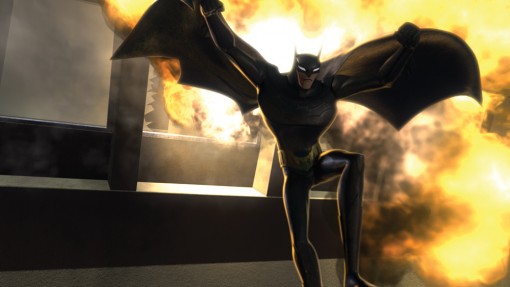 “This is not a dark, brooding, moping version of Batman,” adds Murakami. “He is a bit more aware of himself and trying to fix the bad things that have happened to him. He doesn’t want bad things to happen to anyone else. You can think of it as a modern, animated version of the Adam West show.” He pauses for a bit and quickly adds, “But it’s not as campy, of course.”

Beware the Batman will premiere on Cartoon Network on July 13.

The Dream Team Is Back
ABP Perspective: Music Hall of Williamsburg