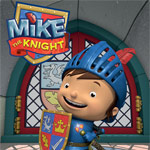 The series has been sold to Super RTL in Germany, and the broadcaster has also been appointed as the property’s licensing agent in the territory.

This brings the total number of international broadcast sales for the medieval preschool property to 17.

Mike the Knight’s international expansion also continues with the appointment of CPLG Benelux and TF1 Licenses as licensing agents in their respective territories.

“Having secured this strong raft of TV sales we can now roll out our international licensing programmes in these key territories,” said Jon Owen, senior VP, HIT Brands Global. “We are thrilled to have such high profile agents on board and look forward to working with them to help achieve our mission of making Mike an international sensation.”

These latest deals follow the successful launch of the series on TF1 (France), CBeebies (UK), Treehouse (Canada) Nick Jr US, and ABC (Australia).