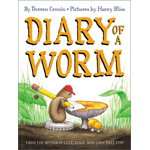 HIT Entertainment has acquired the rights to children’s books Diary of a Worm, Diary of a Fly and Diary of a Spider by Doreen Cronin and Harry Bliss and is developing them into an animated series for kids ages 3-5.

The series has a working title of Diary of a Worm, Spider, and Fly and will encourage children to explore the world through the adventures of the three unlikely best friends. A science curriculum focused on earth schienes will developed to accompany the animated TV show.

The books have all been New York Times bestsellers, and Cronin and Bliss are both award-winning creators of children’s books. They will serve as consultants on the series.

“The best-selling books have captured children’s imaginations and teach science concepts with humor and simple sophistication,” says Karen Barnes, executive VP of development and production for HIT. “Kids can easily relate to the characters, and stories and the format will lend itself well to the small screen.”

“I love that Worm, Spider and Fly are getting these opportunities to really showcase their personalities,” says Cronin. “It’s like watching them grow!”

You may also like...
Related Topics:Diary of a Fly, Diary of a Spider, Diary of a Worm, Doreen Cronin, Harry Bliss, HIT Entertainment