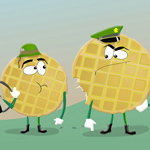 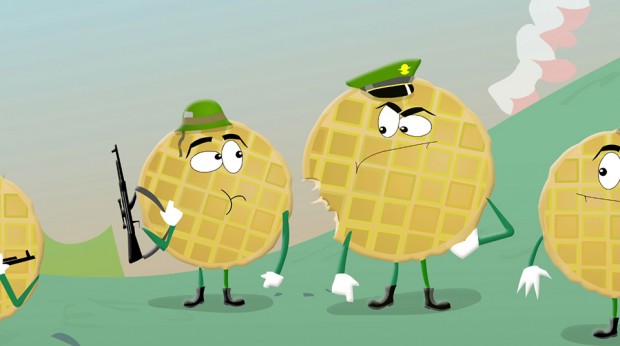 For passionate animators who’ve always wanted to create their own show but have never had the opportunity to do so, DreamWorksTV is a match made in heaven.

“We don’t mess around; we just make stuff,” says Birk Rawlings, head of animation for the channel.

And make stuff, it does. Based on YouTube, DreamWorksTV produces anywhere from 1,000 to 1,500 shorts a year — about half of which are animated, Rawlings says. Among the animated content are shows featuring characters from established DreamWorks franchises, such as Shrek, Puss in Boots and Kung Fu Panda.

But that still leaves a lot of room for original content and original visions. Among the hit series DreamWorksTV has launched: Jimmy Blue Shorts, a sketch comedy series about a pair of talking shorts; Gorillaville, about a trio of primates who cause trouble in a peaceful wildlife preserve; News That Doesn’t Stink, featuring a kid-oriented, The Onion-style take on the news; the ensemble comedy series Public Pool; and the hit Fifi: Cat Therapist.

“When you’re dealing with much bigger budgets and much bigger bets, it’s hard to take risks on things that are unproven,” says Rawlings. “We can do a silly show using cardboard characters and stop motion that bigger operations would never bet on.”

For animators with an appropriate idea and the resources to pull it off, it’s the best of both worlds to have creative control and DreamWorks branding.

“We feel like we’re in control,” says Chris Hamilton, president of animation studio Oddbot and producer on several DreamWorksTV shows, including Zach Aufdemberg’s Jimmy Blue Shorts; and Dennis Messner’s upcoming Fishstick and Honeybear show. “(Rawlings) definitely gave us a lot of creative freedom and we came up with some really wacky ideas and he definitely supported Zach and our direction.”

DreamWorksTV had its origins in a company called AwesomenessTV, which DreamWorks Animation and minority partner Hearst Corp. acquired in 2013. Rawlings says DreamWorks was drawn to the company, founded in 2012 by Brian Robbins, because of its success reaching teenage viewers. DreamWorks wanted to do the same thing with children and bring to that audience the studio’s brands.

“It is a daunting thing to create something from scratch, but doing so in this really exciting playpen that is digital distribution and the Internet has actually been really fun and rewarding so far,” says Rawlings.

But so much demand means the channel is wide open for new, original content from animators of all types.

“We’re finding them from all over,” says Rawlings. “It’s a mix of creators and artists with a lot of experience in traditional television or movies, in some cases that have developed a lot of things or worked on other people’s shows but haven’t had a lot of opportunity to get their own voice out there.”

The relationships often originated over many years, but the studio is willing to work with talented newcomers who show they can produce the content with limited resources and under tight deadlines.

Animators supplying content for the channel work in any number of ways, from one-person shops to creators subcontracting with a third-party studio for some of the work to the channel working directly with a full-service studio, Rawlings says.

The studio buys the rights to the shows it picks up for DreamWorksTV and “we try to arrange the deals in such a way that we all participate in its success,” Rawlings says.

The speedy approach and lack of a network oversight infrastructure means animators have a lot of creative freedom and a much less formal review process.

“I’m basically a one-man team. I have my actors and my composer, but I do all the writing, storyboarding, animation, sound design — all that kind of stuff,” says Stephen Leonard, creator of Dueling Kapowskis. “They give me parameters that I need to work in and they just say, stay within these, this is our target group, and then they give me some notes along the way. But I have 95 percent control of the show, and that’s been great because as a creator that’s what I want.”

“We’ll check in at all the major phases — premise, script, storyboard and animation — but it’s a very different creative interaction than you would have at a traditional studio or network,” says Rawlings. “While there are some hard lines in terms of what’s appropriate for our audience, beyond that it’s more of a conversation and guidance rather than directives.”