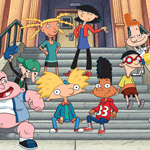 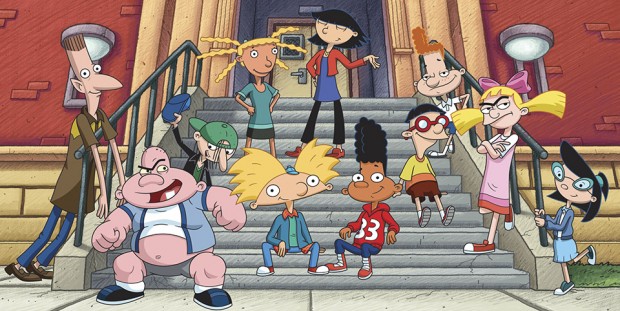 Thirteen years after the show went off the air, Craig Bartlett’s beloved animated character returns in a wonderful new movie on Nickelodeon.

The wait is over! Children of the late ‘80s and ‘90s who have been waiting patiently to find out some answers about their favorite characters from the hugely popular Hey Arnold! series will finally get some closure when Nickelodeon premieres Hey Arnold!: The Jungle Movie this November. The two-hour movie reunites us with Craig Bartlett’s “football-head” hero and the rest of the gang from Hillwood and explores the fate of Arnold’s parents.

Not only is the animated project bound to make Arnold fans immensely happy, it also makes Bartlett a very happy camper as he gets to provide some answers to some of the questions that were hanging in the air since 2002’s Hey Arnold!: The Movie and after the show ended its five-season run in June of 2004.

“It’s seems like we’ve been waiting forever,” says Bartlett, who originally created the Arnold character 20 years ago, for the clay-mated “Penny” shorts featured in Pee-wee’s Playhouse. “We got the greenlight from Nick to make this TV movie about three years ago. So, we worked furiously to shape the story—Joe Purdy and I wrote the first part and Lisa (Groening) and Laura (Sreebny) worked on the second hour. In the spring of 2015, we had a giant table read with some of the cast members, all the writers and Nick execs. Then, we got started to record the voices and storyboarded the movie … It took about two and half years of recording, writing and production, and we’re finally at the finish line! It must be one of the longest inception to delivery dates in animation!”

Directed by Raymie Muzquiz, a 2002 veteran of the series, as well as Futurama and Clarence; and Stuart Livingston, storyboard artist on Futurama, Clarence and Steven Universe, the new movie serves as a sequel to Hey Arnold!: The Movie and the two-part series finale “The Journal,” which both premiered in 2002 on Nickelodeon as part of the fifth and final season of the original show.

“I think it is the coolest looking version of Arnold ever,” say the six-time Emmy-nominated Bartlett, whose credits include Rugrats, Sid the Science Kid, Dinosaur Train, and the 2018 Nick series Sky Rat. “Our Korean animation studio Saerom, who worked on the original series, really brought their A game. It felt like a homecoming to work with them again. The Nick Digital team in Burbank helped us a lot, too. Hey Arnold! became digital in the last two seasons of the show. We now have a bigger and wider resolution frame than we had before. We wanted this movie to be more cinematic, so I hope we can have some screenings in movie theaters in some cities as well.”

Some New and Old Kids

The design team made a big effort to refresh the characters and backgrounds. As Bartlett explains, “We revisited the designs and colors since the movie was going to be made in high-def and 16:9 aspect ratio. We could now use better technology and bigger format. Some time has gone by since we last saw the characters. The kids are now finishing fifth grade and getting ready for sixth grade. I wanted it to feel like visiting the old home, but everything is a little more vivid, and we have a broader, more intense color palette.”

The writer/director also points out that he was very pleased with the way fans reacted to some of the images at last summer’s Comic-Con. “We had a day and nighttime view of Arnold’s boarding house, and everyone pored over the images, and analyzed the assets. They knew that we spiffed up the alley and planted a few trees. That’s the kind of scrutiny our movie has been getting on the Internet … We showed every character that had been on the show, and fans could see that they are all slightly updated, but the core of everything is the same. Arnold is still Arnold, Gerald is still Gerald, and Helga, of course, is still Helga.”

Bartlett points out that making the movie for Nick’s audiences in 2017 has its own special kind of challenges. “We have three groups that will be tuning in,” he says. “There are the Hey Arnold! super fans who grew up with the show and are now anywhere between 20 and 35 years old. They are interested in the Arnold cannon and are very interested in all the details, and enjoy the foibles of the adults as well. Then, there are Nick’s current audience, who are between six to 11 and may not know the series and the characters. There’s a third group, which is made up of the children of the adults who originally watched the show, whose parents showed them the episodes on DVD. I am happy that we were able to be true to what the series was and didn’t have to make a lighter version. I think everyone can handle that.”

Bartlett says he is very pleased with the great mix of professionals who worked on the movie—half of them are old-school original Hey Arnold! staffers, and the other half were its target audience. “I think the movie really benefited from the mix. The younger crew were actual fans of the show when it was first on the air, and it inspired them to become animators or writers. They got to work on it with this deep love of a show that only a kid can have. Stu Livingston, who co-directed the movie with Raymie, has such a deep knowledge of the series and was able to offer such great details about the history of the show that none of us would remember.”

“I was hired years ago to co-direct the movie, and the project got mothballed,” recalls Muzquiz. “It took multiple regimes at Nickelodeon until someone thought it was a good idea to reboot the show. So we started to work on the script and refreshed the characters. Really, this movie is the culmination of getting a closure that we had dreamed about for 17 years.”

“We did some trimming along the way,” says the movie’s co-director. “We had to boil down the recaps and character expositions in the first half of the movie. We learned that it’s a good idea if Arnold just goes along on his adventure.”

Muzquiz recalls that back in the early days, he and the rest of the team would talk about the movies they had seen over the weekend. “We were really into Miyazaki movies back then, so we were always trying to find ways to infuse some of those mythological elements, amulets and magical machinery from films like Castle in the Sky into our show. For this movie, we also took great pains to make the characters a bit older, so in a way, we were road-testing them for a sixth season if that happens in the future.”

Both Bartlett and Muzquiz are hoping that fans will be delighted with the movie they’ve been toiling away on for these past few years. “I know it’s a big cliché, but just like fine wine, this property has aged very well,” concludes Muzquiz. “I think the added gravitas and underlying foundation of the show make it stand out from everything else that I’ve ever done in my career. I hope it’s not all in my head!”

Hey Arnold!: The Jungle Movie premieres on Nickelodeon on Friday November 24 at 7 p.m.

Blade Runner 2049: Return to the Planet of the Replicants
The Star: In A Different Light