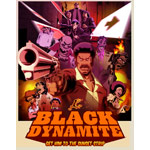 We’re only talking about Adult Swim’s newest animated star and his funkadelic show, Black Dynamite! Can ya dig it?

The 2D-animated half-hour series follows the exploits and adventures of its titular hero (voiced by co-creator Michael Jai White, who also co-wrote and starred in the film) and his crew—Honeybee (Kym Whitley), Bullhorn (co-creator Byron Minns) and Cream Corn (Tommy Davidson). Set in 1970s America, Black Dynamite is a Vietnam War vet who runs an orphanage while foiling evil plots with good old- fashioned violence, and a sexy mustache. The key cast reprise their roles from the 2009 flick; Debra Wilson, Orlando Jones, Cedric Yarbrough also provide voices for the show.

As a fan of the live-action movie, executive producer Carl Jones (The Boondocks, Freaknik) was eager to bring his cartoon expertise to such a unique project. 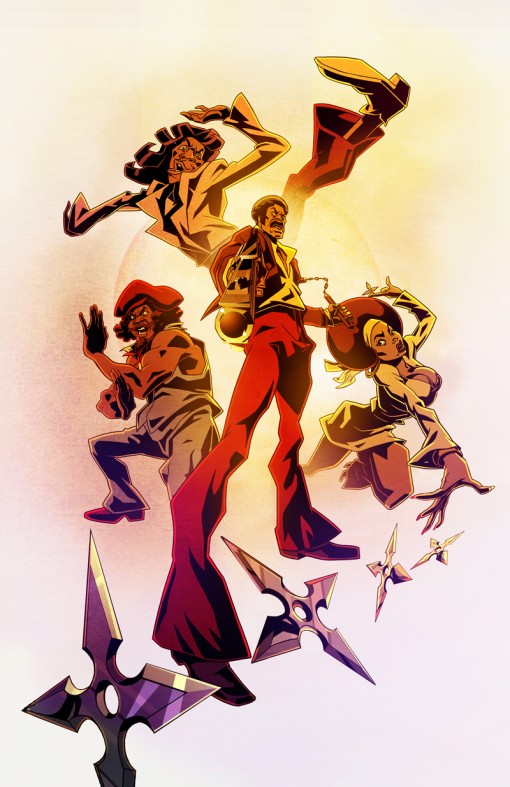 “I thought it was a brilliant film; even though it was an homage to the genre I felt even people who were not familiar with blaxploitation would enjoy it, that it had really strong comedy and visually it would be interesting to see it animated. It was a match made in heaven!”

Jones first got involved after Ars Nova reached out to Six Point Harness, who delivered some animation for the film, about attempting a toon series. The studio referred them to Jones. Because the producer had worked with Titmouse on Freaknik, production of an 11-minute pilot greenlit by Adult Swim went to them. After reviewing the pilot, the show creators realized that Black Dynamite was too much larger than life for a short format. Adult Swim then gave the go-ahead for a half-hour series. The first 10 episodes are set to wrap in October after roughly 62 weeks of production.

For co-creator and star Michael Jai White, whose extensive credit list includes Why Did I Get Married?, The Dark Knight and Universal Soldier, sending his character into the animated universe was a surprising twist. 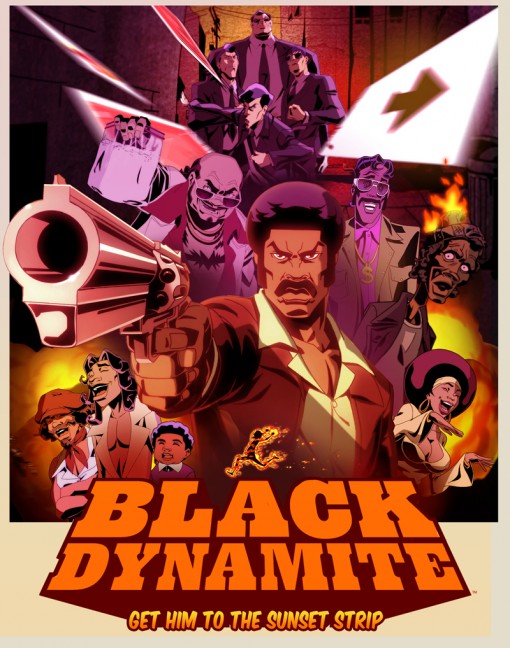 “I hadn’t thought of it as a cartoon,” he admits. “All I could see was the movie and trying to do any kind of follow-up. When I met Carl, I realized he was one of the main driving forces behind Boondocks—I was a big fan—so I was all for that. Combining his talent and ours, that to me was exciting.”

One of the most striking aspects of the show is the unique animation style—a heady mix of comic-book poses, anime influenced graphics and a certain gritty ‘70s grooviness. Jones drew on a number of influences from the animation world to craft the show’s look. One of his toon idols is Japanese director Takeshi Koike, whose heavy use of back shadows were a key inspiration, as were the expressive poses of Chuck Jones and John Kricfalusi characters and Peter Chung’s use of extreme perspectives in Aeon Flux. The 2D series is being done chiefly with traditional animation techniques by a service studio in Korea, with a small exception of some seamless Flash sequences done at Titmouse for the final episode.

The producer says it was a challenge to find artists who could believably blend the relatively realistic characters and solid backgrounds, as well as find interesting shots. 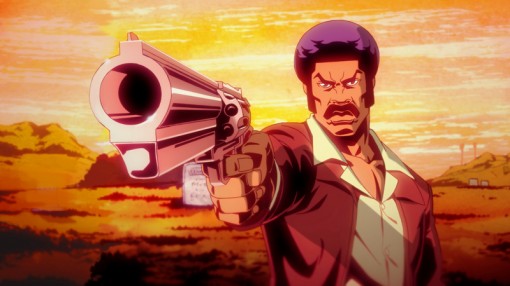 “In my mind, the thing that was really attractive about blaxploitation movies was the posters—they have these dynamic poses, upshots—I wanted to make something where you could take a single screen and make it into a blaxploitation poster. I was pretty hard on the artists to deliver that.”

Though White has done voice work for animation in the past, this is the first time he’s been closely involved with a toon production.

“I always respect people’s perspective, and stepping into the animated world, I realized it was different. Different style, different kind of communication. If I’m smart, I sit back and learn how to implement what I have, how I can help.” 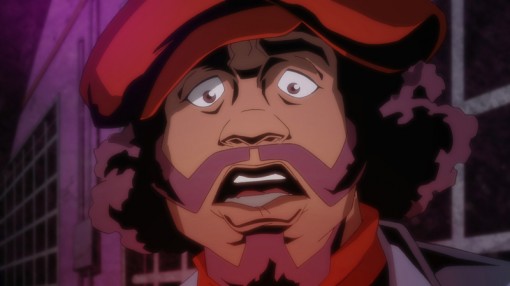 Jones says he relied heavily on White’s ability to step inside Black Dynamite’s character and know what he would do in a given situation, as White concurs.

“I knew the characters and what they would do, which I would try to impart. Some of it I realized we had to give up, because it is an animated world—people can do things that are supernatural, really, and that’s part of the humor,” he says. “If Black Dynamite can kick someone’s ass in real life, he can put his foot up someone’s ass in a cartoon!”

Fans of the original film and Adult Swim aficianados will be happy to hear that the show will carry all the raunchy humor and gratuitous nudity they can expect. While Jones notes there was an early hiccup regarding the self-defeating similarity of a black censor bar to our hero’s genitalia, he says the network has been understanding of their mission to push the toon envelope. 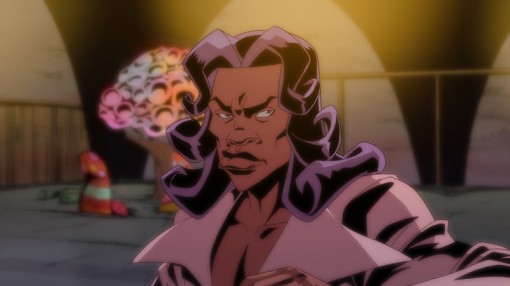 “The movie went there, and for the fans it would be disappointing if we toned it down,” Jones thinks. “There’s pressure to deliver it at that level, push the envelope and find that kind of uncomfortable spot where some people will get mad and some people will think it’s hilarious … People don’t have many shows that go into places you’re ‘not supposed to.’ So yeah, there’s a lot of nudity, a lot of foul language, but it’s organic to the story.”

While the 2009 movie was a parody of the 1970s low-budget action flicks centered on African American characters known as “blaxploitation” films, the series is not what Jones calls “a parody of a parody.” To the creators, it didn’t make sense to spoof the schlocky parts of the genre in animation—brazen continuity errors that were funny on film would just look like, well, errors. Instead, Black Dynamite takes those exaggerated elements from the old films and makes them real in this animated world.

“It’s largely about what the 1970s is. The fashion, the music, the sexiness … People respond to that ‘70s type of attitude, it’s the epitome of sex. So Black Dynamite is set in the sexiest of times and as far as movies and culture the most interesting of times,” White explains. “[The show] is just focused on what this one crazy family is doing in 1974.” 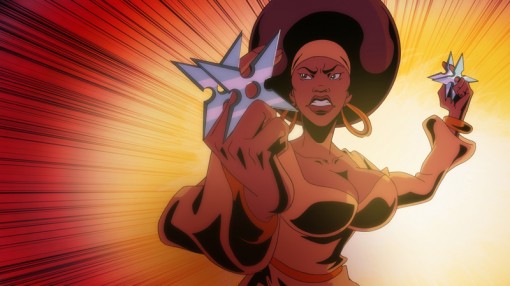 The rich culture of the decade is also supplying wild storylines for the show. With a little historical revision, Jones says, the cartoon allows them to take well-known celebrities of the era like Elvis, Michael Jackson or comedian Richard Prior and tell their own version of how these icons came to be who they are.

The heroes of these ‘70s films are a big inspiration for the character of Black Dynamite, Jones adds.

“[Black Dynamite] is the ultimate anti-hero. Even though he runs an orphanage and is presumed to be a pimp (or at least has the swagger of a pimp), he’s a real hero. He can bust your ass for real. He can shoot you, he has nunchucks, he is a martial arts expert. That’s what I love about that era. These heroes were real guys. They weren’t running around in spandex and flying. They were real men, and I feel like Black Dynamite embodies that.” 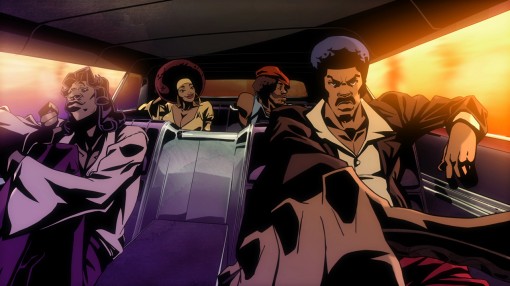 While the creative team and their artistic allies at Titmouse continue to hammer out the adventures of this sexy and delightfully violent anti-hero, Jones and White hint that they are already thinking about future collaborations. In the meantime, both hope Black Dynamite will continue to put boots up asses on Adult Swim for a long time to come.

“I don’t think there’s ever been a show on TV that embodies all of these different elements,” Jones enthuses. “The idea of doing a superhero such as Black Dynamite is groundbreaking in animation, and I think it’s what the TV world and the animation world needs.”