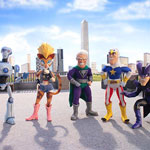 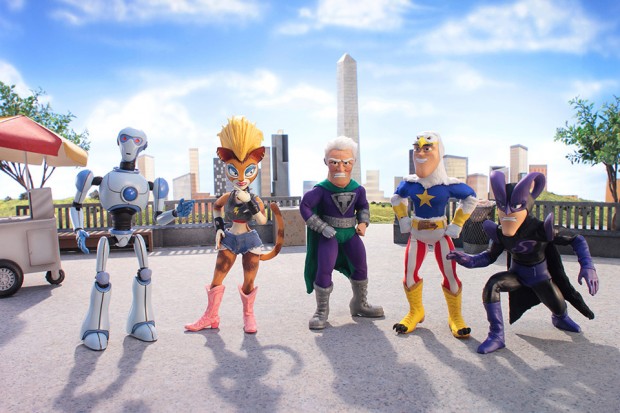 Stoopid Buddies Stoodios has been poking fun at other companies’ characters for years with its sketch show Robot Chicken — now it’s finally making the leap into poking fun at its own characters with the new online series SuperMansion.

“We did it with Star Wars, we did it with DC Comics, why not make our own (universe) and then, hopefully, we can make fun of it on Robot Chicken — that’s the goal,” says Matthew Senriech, who co-created the series with Zeb Wells.

Senreich and Wells draw on their comic-book roots for SuperMansion, which is about a group of superheroes that draw on the genre’s familiar tropes but is also just slightly off.

“We wanted to look at some of the character types we grew up with and have a little bit of fun with them,” says Wells.

While Robot Chicken has been a hit on Adult Swim since its 2005 debut, SuperMansion debuts on Sony Pictures Entertainment’s streaming video platform Crackle. The first three episodes of the 13-episode first season debut Oct. 8 on Crackle with new episodes available weekly.

“With Robot Chicken, we started with Adult Swim when they were just emerging onto the market and it was the new place to be to help define something,” he says. “And that’s what we loved about Crackle; it’s the new platform, and this is the future. We like the idea of again help starting something out.”

A key addition to the show is acclaimed actor Bryan Cranston, who voices Titanium Rex and is executive producer on the series alongside Seth Green, John Harvatine, Eric Towner and James Degus.

Senreich says they always had a “Bryan Cranston type” in mind for the show and decided eventually to just see if he’d like to do it. “In 24 hours, we got a call directly from Bryan saying he read it on an airplane,” he says. “It was right towards the end of Breaking Bad and he was like: ‘You know, I’m reading a ton of scripts right now and this is the only one that’s made me laugh. I don’t want to just star in this, I want to make this with you.’”

Animation wise, the show has a smoother look than Robot Chicken, with more polished standing sets and puppets that look less like toys. The studio also is taking advantage of 3D printing to create puppets, props and other on-screen elements.

“We’re trying to hide the seams a little bit more,” says Wells. “On Robot, we’re proud of the seams.”

The Return of Mouse and Mole
Hatching a Hit