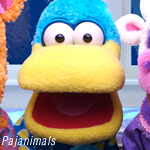 The series will consist of 26 half hour episodes, and will air exclusively on Sprout in the United States starting in the fall and went out to the international markets at MIP-TV.

The Pajanimals series will follow the amazing adventures of the four sweet and gentle puppet characters. Through their imaginary journeys, the Pajanimals will model the skills preschoolers need to move through their days and nights successfully.

Production will begin immediately in Northern Ireland, with funding assistance from Northern Ireland Screen. The Jim Henson Company’s CEO Lisa Henson and Executive VP of Children’s Entertainment Halle Stanford will serve as executive producers for the series, along with long-time Henson producer, Alex Rockwell (Bear in the Big Blue House, Elmo in Grouchland) and Jeff Muncy.

Serving as executive producer for Sprout will be Senior VP of Programming Andrew Beecham, while Lisa O’Brien, Sprout’s VP of original programming and development, will serve as executive in charge of production. Sixteen South’s Colin Williams (Big City Park, Sesame Tree) will serve as producer for the series, with Michael and Patty Silversher (Winnie the Pooh, Animal Jam, Dinosaur Train) composing the music. The Jim Henson Co. is handling all ancillary use of the property including licensing, video and merchandising.