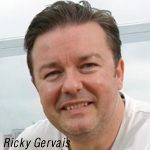 HBO has ordered a third season of its animated series The Ricky Gervais Show.

The series, which will air the final episode of its second season on April 15, is an animated version of the popular podcasts that featured Gervais and producer Stephen Merchant chatting with “round-headed buffoon” Karl Pilkington.

The conversations are animated by Los Angeles-based Wildbrain in a classic, Hanna-Barbera style, with Gervais made to resemble the younger brother of Fred Flintstone. Season two was directed by Dan Fraga.

Here’s a sample of the show from season two: