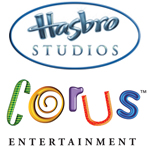 Hasbro Studios and Canada’s Corus Entertainment have agreed to a comprehensive output deal for programming and marketing.

The deal covers a number of Hasbro-produced series such as Transformers Prime, My Little Pony: Friendship is Magic, G.I. Joe: Renegades, The Adventures of Chuck and Friends and Pound Puppies, airing on Corus services such as YTV, Treehouse, Nickelodeon Canada, Teletoon and Teletoon Retro.

“Our partnership with Corus’ kids networks marks the first of many distribution agreements that are designed to expand the Hasbro television programming brands around the world,” said Stephen Davis, president of Hasbro Studios. “We are delighted to be in business with Corus, renowned for its highly targeted television brands, strong partnerships and compelling content.”

“We’re very excited to be able to offer our viewers the terrific line-up of Hasbro programs across our many Corus kids platforms. Hasbro has always been a great partner and we look forward to growing that relationship,” said Ted Ellis, VP of kids and family programming for Corus Television.

You may also like...
Related Topics:Corus, Deal, Hasbro, Output