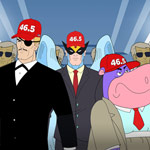 In an astonishing official brief from the Adult Swim Press Secretary, megalomaniac billionaire President Phil Ken Sebben announced that winged courtroom warrior Harvey Birdman has been named the next Attorney General! First on AG Birdman’s agenda? Finding a way to remove President Sebben from office, before everyone starts to worry it’s more than a ridiculous cartoon storyline…

Yes, this is the compelling news that a brand-new half-hour animated special Harvey Birdman, Attorney General is bringing the cult hit reimagining of Saturday morning superhero back to the airwaves. Created and executive produced by Michael Ouweleen and Erik Richter, the special welcomes back the original voice cast, with Gary Cole as Harvey Birdman, Stephen Colbert as Phil Ken Sebben, John Michael Higgins as Mentok the Mindtaker, Paget Brewster as Birdgirl, Chris Edgerly as Peter Potamus, Peter MacNicol as X the Eliminator and Phil LaMarr as Black Vulcan.

“This is a great day for our country and for no one else,” said Richter.

Richter and Ouweleen’s Harvey Birdman, Attorney at Law aired on the network from 200 to 2007, running for four seasons. The show explores how the daily grind and gavel-banging excitement of the US legal system operates in a Saturday Morning Cartoon universe, with Bardman in the middle — defending mafia boss Fred Flintstone or clearing up a trenchcoat mishap involving Secret Squirrel. 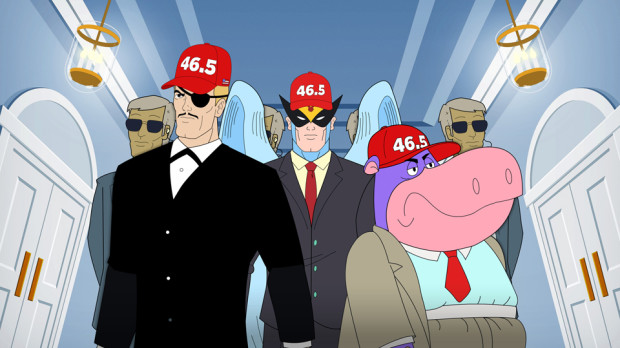